The word “resurrection” appears 56 times throughout the books of the Bible. The graph below shows the locations of each appearance. It begins with Genesis in the top left and concludes with Revelation in the bottom right. 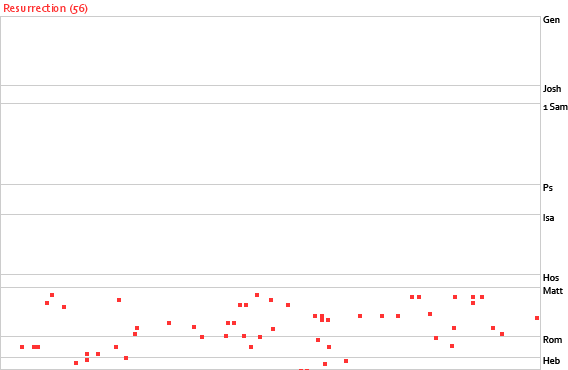 Here are the 30 most powerful Bible scriptures on the resurrection.

1 Peter 1:3
Blessed be the God and Father of our Lord Jesus Christ! According to his great mercy, he has caused us to be born again to a living hope through the resurrection of Jesus Christ from the dead.

1 Thessalonians 4:14
For since we believe that Jesus died and rose again, even so, through Jesus, God will bring with him those who have fallen asleep.

John 6:40
“For this is the will of my Father, that everyone who looks on the Son and believes in him should have eternal life, and I will raise him up on the last day.”

1 Corinthians 6:14
And God raised the Lord and will also raise us up by his power.

1 Peter 3:21
Baptism, which corresponds to this, now saves you, not as a removal of dirt from the body but as an appeal to God for a good conscience, through the resurrection of Jesus Christ.

1 Thessalonians 4:16
For the Lord himself will descend from heaven with a cry of command, with the voice of an archangel, and with the sound of the trumpet of God. And the dead in Christ will rise first.

Acts 24:15
Having a hope in God, which these men themselves accept, that there will be a resurrection of both the just and the unjust.

Acts 3:15
And you killed the Author of life, whom God raised from the dead. To this we are witnesses.

Daniel 12:2
And many of those who sleep in the dust of the earth shall awake, some to everlasting life, and some to shame and everlasting contempt.

Isaiah 26:19
Your dead shall live; their bodies shall rise. You who dwell in the dust, awake and sing for joy! For your dew is a dew of light, and the earth will give birth to the dead.

John 14:19
“Yet a little while and the world will see me no more, but you will see me. Because I live, you also will live.”

John 20:1
Now on the first day of the week Mary Magdalene came to the tomb early, while it was still dark, and saw that the stone had been taken away from the tomb.

John 6:54
“Whoever feeds on my flesh and drinks my blood has eternal life, and I will raise him up on the last day.”

Luke 14:14
“And you will be blessed, because they cannot repay you. For you will be repaid at the resurrection of the just.”

Mark 16:6
And he said to them, “Do not be alarmed. You seek Jesus of Nazareth, who was crucified. He has risen; he is not here. See the place where they laid him.”

Philippians 3:10
That I may know him and the power of his resurrection, and may share his sufferings, becoming like him in his death.

Psalm 16:10
For you will not abandon my soul to Sheol, or let your holy one see corruption.

Romans 1:4
And was declared to be the Son of God in power according to the Spirit of holiness by his resurrection from the dead, Jesus Christ our Lord.

Romans 4:25
Who was delivered up for our trespasses and raised for our justification.

Romans 6:4
We were buried therefore with him by baptism into death, in order that, just as Christ was raised from the dead by the glory of the Father, we too might walk in newness of life.

Romans 8:34
Who is to condemn? Christ Jesus is the one who died—more than that, who was raised—who is at the right hand of God, who indeed is interceding for us. 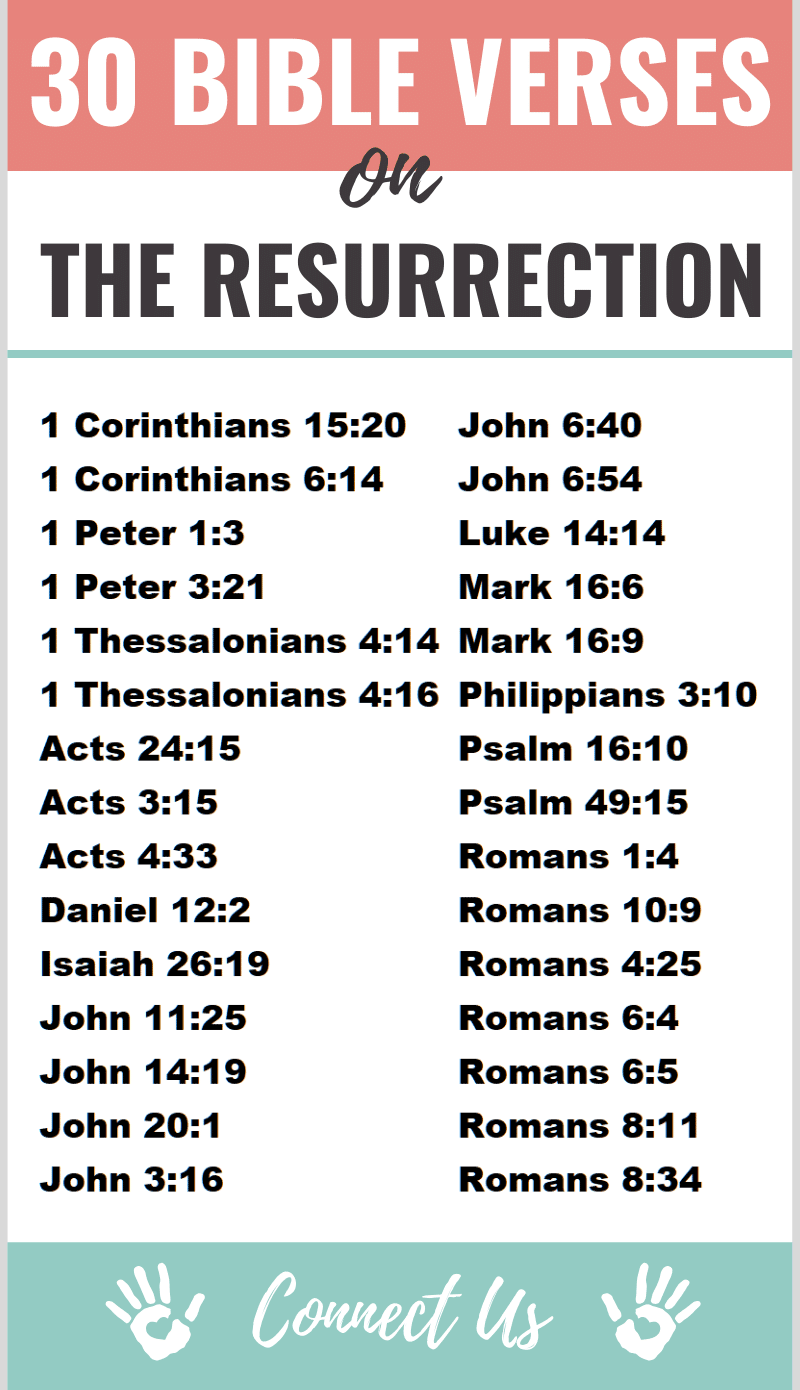