The word “fire” appears 474 times throughout the books of the Bible. The graph below shows the locations of each appearance. It begins with Genesis in the top left and concludes with Revelation in the bottom right. 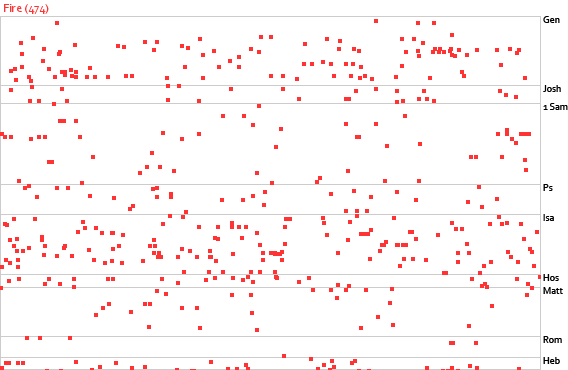 Here are the 40 best bible scriptures on fire.

Luke 3:16
John answered them all, saying, “I baptize you with water, but he who is mightier than I is coming, the strap of whose sandals I am not worthy to untie. He will baptize you with the Holy Spirit and with fire.”

Psalm 104:4
He makes his messengers winds, his ministers a flaming fire.

Luke 12:49
“I came to cast fire on the earth, and would that it were already kindled!”

Exodus 3:2
And the angel of the Lord appeared to him in a flame of fire out of the midst of a bush. He looked, and behold, the bush was burning, yet it was not consumed.

1 Corinthians 3:13
Each one’s work will become manifest, for the Day will disclose it, because it will be revealed by fire, and the fire will test what sort of work each one has done.

1 Kings 18:38
Then the fire of the Lord fell and consumed the burnt offering and the wood and the stones and the dust, and licked up the water that was in the trench.

1 Peter 1:7
So that the tested genuineness of your faith—more precious than gold that perishes though it is tested by fire—may be found to result in praise and glory and honor at the revelation of Jesus Christ.

2 Chronicles 7:1
As soon as Solomon finished his prayer, fire came down from heaven and consumed the burnt offering and the sacrifices, and the glory of the Lord filled the temple.

2 Peter 3:10
But the day of the Lord will come like a thief, and then the heavens will pass away with a roar, and the heavenly bodies will be burned up and dissolved, and the earth and the works that are done on it will be exposed.

Acts 2:3
And divided tongues as of fire appeared to them and rested on each one of them.

Amos 1:10
“So I will send a fire upon the wall of Tyre, and it shall devour her strongholds.”

Deuteronomy 4:24
For the Lord your God is a consuming fire, a jealous God.

Deuteronomy 9:3
Know therefore today that he who goes over before you as a consuming fire is the Lord your God. He will destroy them and subdue them before you. So you shall drive them out and make them perish quickly, as the Lord has promised you.

Exodus 19:18
Now Mount Sinai was wrapped in smoke because the Lord had descended on it in fire. The smoke of it went up like the smoke of a kiln, and the whole mountain trembled greatly.

Exodus 40:38
For the cloud of the Lord was on the tabernacle by day, and fire was in it by night, in the sight of all the house of Israel throughout all their journeys.

Genesis 15:17
When the sun had gone down and it was dark, behold, a smoking fire pot and a flaming torch passed between these pieces.

Hebrews 1:7
Of the angels he says, “He makes his angels winds, and his ministers a flame of fire.”

Isaiah 43:2
“When you pass through the waters, I will be with you; and through the rivers, they shall not overwhelm you; when you walk through fire you shall not be burned, and the flame shall not consume you.”

James 3:6
And the tongue is a fire, a world of unrighteousness. The tongue is set among our members, staining the whole body, setting on fire the entire course of life, and set on fire by hell.

Jeremiah 20:9
“If I say, ‘I will not mention him, or speak any more in his name,’ there is in my heart as it were a burning fire shut up in my bones, and I am weary with holding it in, and I cannot.”

Jeremiah 23:29
“Is not my word like fire,” declares the Lord, “and like a hammer that breaks the rock in pieces?”

Jude 1:7
Just as Sodom and Gomorrah and the surrounding cities, which likewise indulged in sexual immorality and pursued unnatural desire, serve as an example by undergoing a punishment of eternal fire.

Leviticus 9:24
And fire came out from before the Lord and consumed the burnt offering and the pieces of fat on the altar, and when all the people saw it, they shouted and fell on their faces.

Mark 9:43
“And if your hand causes you to sin, cut it off. It is better for you to enter life crippled than with two hands to go to hell, to the unquenchable fire.”

Matthew 3:11
“I baptize you with water for repentance, but he who is coming after me is mightier than I, whose sandals I am not worthy to carry. He will baptize you with the Holy Spirit and fire.”

Numbers 11:1
And the people complained in the hearing of the Lord about their misfortunes, and when the Lord heard it, his anger was kindled, and the fire of the Lord burned among them and consumed some outlying parts of the camp.

Numbers 16:35
And fire came out from the Lord and consumed the 250 men offering the incense.

Proverbs 17:3
The crucible is for silver, and the furnace is for gold, and the Lord tests hearts.

Psalm 39:3
My heart became hot within me. As I mused, the fire burned; then I spoke with my tongue.

Revelation 20:9
And they marched up over the broad plain of the earth and surrounded the camp of the saints and the beloved city, but fire came down from heaven and consumed them.

Zechariah 13:9
“And I will put this third into the fire, and refine them as one refines silver, and test them as gold is tested. They will call upon my name, and I will answer them. I will say, ‘They are my people’; and they will say, ‘The Lord is my God.’”

Zechariah 2:5
“And I will be to her a wall of fire all around,” declares the Lord, “and I will be the glory in her midst.”