Colossians 2:8
“See to it that no one takes you captive through hollow and deceptive philosophy, which depends on human tradition and the elemental spiritual forces of this world rather than on Christ.”

Explanation and Commentary of Colossians 2:8

What this “hollow and deceptive philosophy” is, is hard to say, but considering that the ancient world of the New Testament was well acquainted with the Greek philosophers, multiple pagan religions and cults, and the term philosophy was applied broadly, even to the teaching of the Pharisees, it could be any number of things. Most likely though, it refers to the false teaching with which the apostles were constantly in combat, the Gnostics and the Judaizers.

What was behind this deceptive philosophy was “human tradition” and “elemental spiritual forces.” In short, these false teachings were inspired by demons and were opposed to Jesus Christ. Today we are inundated with New Age “philosophies,” chic, Eastern religions, secular social justice movements, and even unbiblical forms of so-called Christianity. The effect of being taken in by one of these is to be taken captive by evil.

In order to “see to it” that we are not taken in, we must read God’s Word every day, join a good church where we can hear the Bible and worship with other believers, and simply ask the Lord to protect us from going astray. If you feel you have wandered off the straight path of Christ, simply repent and get back on.

Breaking Down the Key Parts of Colossians 2:8

#1 “See to it…”
This will take intentionality and guardedness. They (and we) must be vigilant and proactive against false teaching.

#2 “…that no one takes you captive…”
We belong to only one, and that is Jesus. To look to another Gospel or philosophy is to be taken prisoner by it and to be separated from Christ.

#3 “…through hollow and deceptive philosophy,”
At a close look, there is truly no substance to these hollow religions. Today, the foundations under the popular false religions are shaky. Only those who really want to follow them and have been given over to them will fall for it.

#4 “which depends on human tradition…”
While the inspiration is demonic, the false religions and cults of the world are man-made religions, just as idols are made by the hand of man.

#5 “…and the elemental spirits of the world this world…”
But it is true that Satan and demons are behind these man-made religions. “Elemental spirits” is sometimes translated, “elementary principles.” This could refer to the ways of the world that is in darkness. Sin makes the world go round until Christ returns to judge the living and the dead.

#6 “…rather than on Christ.”
If we will fix our eyes on Christ, we will not be led astray to these idols and hollow philosophies.

NIV
See to it that no one takes you captive through hollow and deceptive philosophy, which depends on human tradition and the elemental spiritual forces of this world rather than on Christ.

NLT
Don’t let anyone capture you with empty philosophies and high-sounding nonsense that come from human thinking and from the spiritual powers of this world, rather than from Christ.

ESV
See to it that no one takes you captive by philosophy and empty deceit, according to human tradition, according to the elemental spirits of the world, and not according to Christ.

KJV
Beware lest any man spoil you through philosophy and vain deceit, after the tradition of men, after the rudiments of the world, and not after Christ. 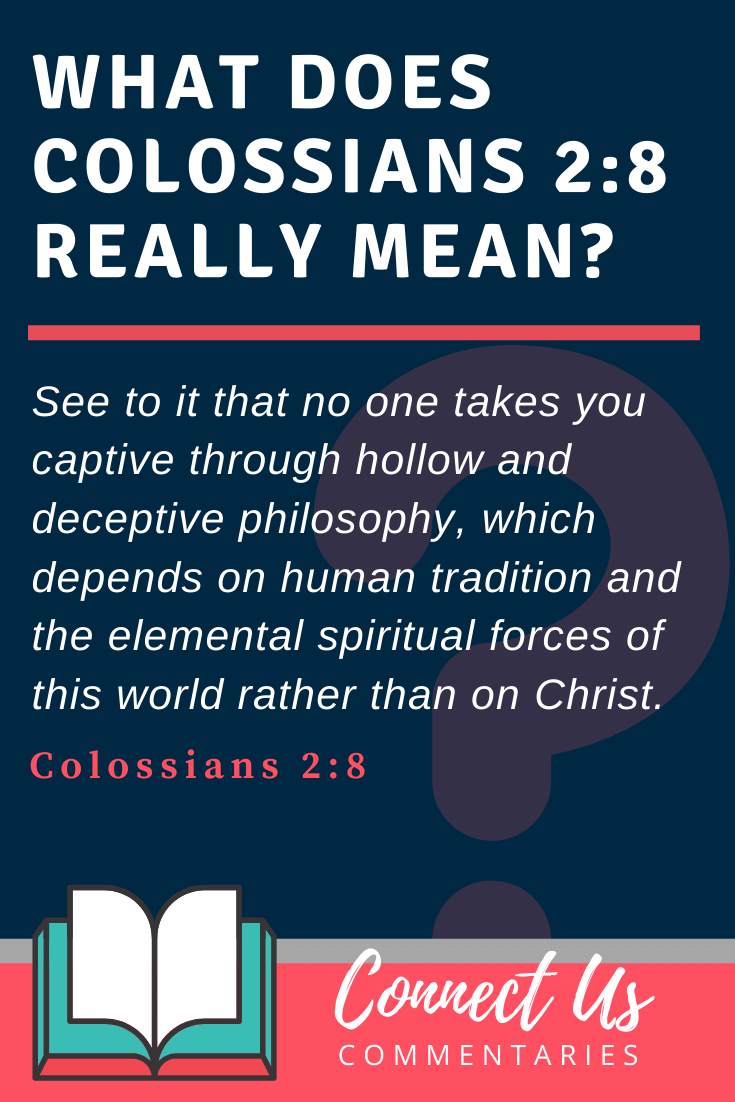