Here are the 40 most encouraging bible scriptures on dying.

Joshua 1:9
“Have I not commanded you? Be strong and courageous. Do not be frightened, and do not be dismayed, for the Lord your God is with you wherever you go.”

Ecclesiastes 12:7
And the dust returns to the earth as it was, and the spirit returns to God who gave it.

Revelation 21:4
He will wipe away every tear from their eyes, and death shall be no more, neither shall there be mourning, nor crying, nor pain anymore, for the former things have passed away.

1 Corinthians 15:22
For as in Adam all die, so also in Christ shall all be made alive.

2 Corinthians 5:8
Yes, we are of good courage, and we would rather be away from the body and at home with the Lord.

2 Peter 2:1
But false prophets also arose among the people, just as there will be false teachers among you, who will secretly bring in destructive heresies, even denying the Master who bought them, bringing upon themselves swift destruction.

2 Thessalonians 1:9
They will suffer the punishment of eternal destruction, away from the presence of the Lord and from the glory of his might.

Acts 2:27
For you will not abandon my soul to Hades, or let your Holy One see corruption.

Ecclesiastes 9:10
Whatever your hand finds to do, do it with your might, for there is no work or thought or knowledge or wisdom in Sheol, to which you are going.

Ecclesiastes 9:5
For the living know that they will die, but the dead know nothing, and they have no more reward, for the memory of them is forgotten.

Genesis 2:7
Then the Lord God formed the man of dust from the ground and breathed into his nostrils the breath of life, and the man became a living creature.

Hebrews 9:27
And just as it is appointed for man to die once, and after that comes judgment.

Hosea 13:14
Shall I ransom them from the power of Sheol? Shall I redeem them from Death? O Death, where are your plagues? O Sheol, where is your sting? Compassion is hidden from my eyes.

John 14:1
“Let not your hearts be troubled. Believe in God; believe also in me.”

John 3:36
Whoever believes in the Son has eternal life; whoever does not obey the Son shall not see life, but the wrath of God remains on him.

Matthew 10:28
“And do not fear those who kill the body but cannot kill the soul. Rather fear him who can destroy both soul and body in hell.”

Matthew 24:36
“But concerning that day and hour no one knows, not even the angels of heaven, nor the Son, but the Father only.”

Matthew 5:4
“Blessed are those who mourn, for they shall be comforted.”

Matthew 8:11
“I tell you, many will come from east and west and recline at table with Abraham, Isaac, and Jacob in the kingdom of heaven.”

Philippians 1:21
For to me to live is Christ, and to die is gain.

Psalm 115:17
The dead do not praise the Lord, nor do any who go down into silence.

Psalm 116:15
Precious in the sight of the Lord is the death of his saints.

Psalm 146:4
When his breath departs, he returns to the earth; on that very day his plans perish.

Psalm 23:4
Even though I walk through the valley of the shadow of death, I will fear no evil, for you are with me; your rod and your staff, they comfort me.

Psalm 6:5
For in death there is no remembrance of you; in Sheol who will give you praise?

Revelation 1:18
“And the living one. I died, and behold I am alive forevermore, and I have the keys of Death and Hades.”

Revelation 14:13
And I heard a voice from heaven saying, “Write this: Blessed are the dead who die in the Lord from now on.” “Blessed indeed,” says the Spirit, “that they may rest from their labors, for their deeds follow them!” 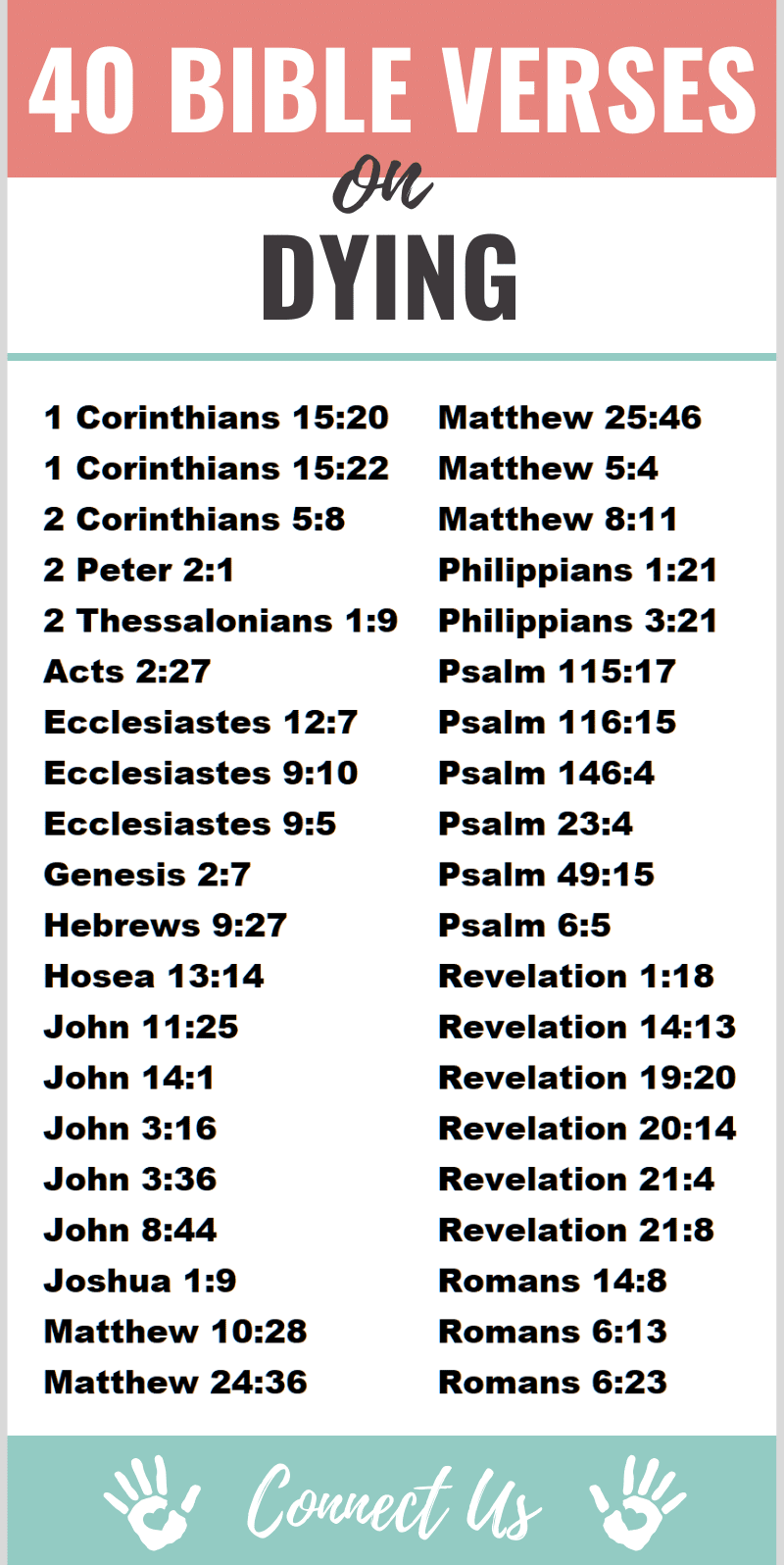