The word “deceive” appears 67 times throughout the books of the Bible. The graph below shows the locations of each appearance. It begins with Genesis in the top left and concludes with Revelation in the bottom right. 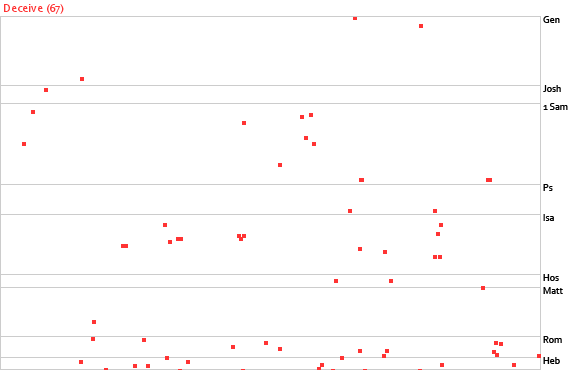 Here are the 40 strongest Bible scriptures on deception.

Proverbs 10:9
Whoever walks in integrity walks securely, but he who makes his ways crooked will be found out.

Proverbs 12:22
Lying lips are an abomination to the Lord, but those who act faithfully are his delight.

Psalm 52:2
Your tongue plots destruction, like a sharp razor, you worker of deceit.

Romans 12:2
Do not be conformed to this world, but be transformed by the renewal of your mind, that by testing you may discern what is the will of God, what is good and acceptable and perfect.

James 1:22
But be doers of the word, and not hearers only, deceiving yourselves.

1 John 5:19
We know that we are from God, and the whole world lies in the power of the evil one.

1 Timothy 2:14
And Adam was not deceived, but the woman was deceived and became a transgressor.

1 Timothy 4:1
Now the Spirit expressly says that in later times some will depart from the faith by devoting themselves to deceitful spirits and teachings of demons.

2 Corinthians 11:3
But I am afraid that as the serpent deceived Eve by his cunning, your thoughts will be led astray from a sincere and pure devotion to Christ.

2 Corinthians 4:4
In their case the god of this world has blinded the minds of the unbelievers, to keep them from seeing the light of the gospel of the glory of Christ, who is the image of God.

2 Thessalonians 2:3
Let no one deceive you in any way. For that day will not come, unless the rebellion comes first, and the man of lawlessness is revealed, the son of destruction.

Colossians 2:8
See to it that no one takes you captive by philosophy and empty deceit, according to human tradition, according to the elemental spirits of the world, and not according to Christ.

Colossians 3:9
Do not lie to one another, seeing that you have put off the old self with its practices

Deuteronomy 11:16
Take care lest your heart be deceived, and you turn aside and serve other gods and worship them.

Ephesians 4:25
Therefore, having put away falsehood, let each one of you speak the truth with his neighbor, for we are members one of another.

Ephesians 5:6
Let no one deceive you with empty words, for because of these things the wrath of God comes upon the sons of disobedience.

Exodus 20:16
“You shall not bear false witness against your neighbor.”

Galatians 6:7
Do not be deceived: God is not mocked, for whatever one sows, that will he also reap.

Genesis 3:4
But the serpent said to the woman, “You will not surely die.”

James 4:1
What causes quarrels and what causes fights among you? Is it not this, that your passions are at war within you?

Jeremiah 17:9
The heart is deceitful above all things, and desperately sick; who can understand it?

John 16:13
“When the Spirit of truth comes, he will guide you into all the truth, for he will not speak on his own authority, but whatever he hears he will speak, and he will declare to you the things that are to come.”

Mark 12:31
“The second is this: ‘You shall love your neighbor as yourself.’ There is no other commandment greater than these.”

Matthew 24:42
“Therefore, stay awake, for you do not know on what day your Lord is coming.”

Proverbs 11:3
The integrity of the upright guides them, but the crookedness of the treacherous destroys them.

Proverbs 15:1
A soft answer turns away wrath, but a harsh word stirs up anger.

Proverbs 24:28
Be not a witness against your neighbor without cause, and do not deceive with your lips.

Revelation 21:8
“But as for the cowardly, the faithless, the detestable, as for murderers, the sexually immoral, sorcerers, idolaters, and all liars, their portion will be in the lake that burns with fire and sulfur, which is the second death.”

Romans 14:1
As for the one who is weak in faith, welcome him, but not to quarrel over opinions.