The word “inheritance” occurs 225 times in the Bible. The infographic below identifies the points of each occurrence. This graphic presentation starts with Genesis in the top left and concludes with Revelation in the bottom right. 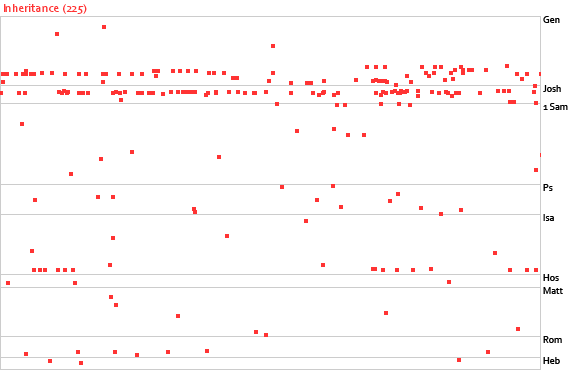 Here are the 40 most transcendent Bible scriptures on inheritance.

Proverbs 13:22
A good man leaves an inheritance to his children’s children, but the sinner’s wealth is laid up for the righteous.

Proverbs 20:21
An inheritance gained hastily in the beginning will not be blessed in the end.

Acts 20:32
And now I commend you to God and to the word of his grace, which is able to build you up and to give you the inheritance among all those who are sanctified.

Titus 3:7
So that being justified by his grace we might become heirs according to the hope of eternal life.

Ephesians 1:18
Having the eyes of your hearts enlightened, that you may know what is the hope to which he has called you, what are the riches of his glorious inheritance in the saints.

1 Peter 1:4
To an inheritance that is imperishable, undefiled, and unfading, kept in heaven for you.

Acts 26:18
To open their eyes, so that they may turn from darkness to light and from the power of Satan to God, that they may receive forgiveness of sins and a place among those who are sanctified by faith in me.

Colossians 1:12
Giving thanks to the Father, who has qualified you to share in the inheritance of the saints in light.

Colossians 3:24
Knowing that from the Lord you will receive the inheritance as your reward. You are serving the Lord Christ.

Ephesians 1:14
Who is the guarantee of our inheritance until we acquire possession of it, to the praise of his glory.

Ephesians 5:5
For you may be sure of this, that everyone who is sexually immoral or impure, or who is covetous (that is, an idolater), has no inheritance in the kingdom of Christ and God.

Galatians 3:18
For if the inheritance comes by the law, it no longer comes by promise; but God gave it to Abraham by a promise.

Galatians 3:29
And if you are Christ’s, then you are Abraham’s offspring, heirs according to promise.

Genesis 12:7
Then the Lord appeared to Abram and said, “To your offspring I will give this land.” So he built there an altar to the Lord, who had appeared to him.

Hebrews 1:14
Are they not all ministering spirits sent out to serve for the sake of those who are to inherit salvation?

Hebrews 1:2
But in these last days he has spoken to us by his Son, whom he appointed the heir of all things, through whom also he created the world.

Hebrews 11:13
These all died in faith, not having received the things promised, but having seen them and greeted them from afar, and having acknowledged that they were strangers and exiles on the earth.

Hebrews 11:8
By faith Abraham obeyed when he was called to go out to a place that he was to receive as an inheritance. And he went out, not knowing where he was going.

Hebrews 9:15
Therefore he is the mediator of a new covenant, so that those who are called may receive the promised eternal inheritance, since a death has occurred that redeems them from the transgressions committed under the first covenant.

Hebrews 9:16
For where a will is involved, the death of the one who made it must be established.

Hebrews 9:17
For a will takes effect only at death, since it is not in force as long as the one who made it is alive.

James 2:5
Listen, my beloved brothers, has not God chosen those who are poor in the world to be rich in faith and heirs of the kingdom, which he has promised to those who love him?

Job 42:15
And in all the land there were no women so beautiful as Job’s daughters. And their father gave them an inheritance among their brothers.

Joshua 1:6
“Be strong and courageous, for you shall cause this people to inherit the land that I swore to their fathers to give them.”

Luke 12:13
Someone in the crowd said to him, “Teacher, tell my brother to divide the inheritance with me.”

Luke 15:12
“And the younger of them said to his father, ‘Father, give me the share of property that is coming to me.’ And he divided his property between them.”

Luke 16:11
“If then you have not been faithful in the unrighteous wealth, who will entrust to you the true riches?”

Matthew 19:29
“And everyone who has left houses or brothers or sisters or father or mother or children or lands, for my name’s sake, will receive a hundredfold and will inherit eternal life.”

Matthew 21:38
“But when the tenants saw the son, they said to themselves, ‘This is the heir. Come, let us kill him and have his inheritance.’”

Matthew 25:34
“Then the King will say to those on his right, ‘Come, you who are blessed by my Father, inherit the kingdom prepared for you from the foundation of the world.'”

Matthew 5:5
“Blessed are the meek, for they shall inherit the earth.”

Numbers 27:8
“And you shall speak to the people of Israel, saying, ‘If a man dies and has no son, then you shall transfer his inheritance to his daughter.'”

Proverbs 17:2
A servant who deals wisely will rule over a son who acts shamefully and will share the inheritance as one of the brothers.

Psalm 16:5
The Lord is my chosen portion and my cup; you hold my lot.

Psalm 16:6
The lines have fallen for me in pleasant places; indeed, I have a beautiful inheritance.

Psalm 37:11
But the meek shall inherit the land and delight themselves in abundant peace.

Psalm 37:29
The righteous shall inherit the land and dwell upon it forever.

Romans 4:13
For the promise to Abraham and his offspring that he would be heir of the world did not come through the law but through the righteousness of faith.

Romans 8:17
And if children, then heirs—heirs of God and fellow heirs with Christ, provided we suffer with him in order that we may also be glorified with him.