The word vision is found 130 times in the Old and New Testament. The image below reveals the locations of each occurrence. This cool graph starts with Genesis in the top left and ends with Revelation in the bottom right. 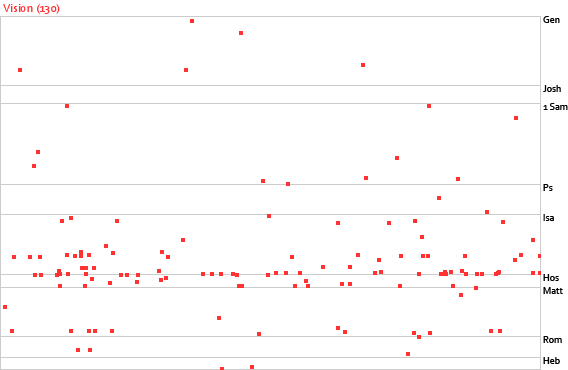 Here are the 50 most meaningful Bible scriptures on vision.

Habakkuk 2:2
And the Lord answered me: “Write the vision; make it plain on tablets, so he may run who reads it.”

Proverbs 29:18
Where there is no prophetic vision the people cast off restraint, but blessed is he who keeps the law.

Habakkuk 2:3
For still the vision awaits its appointed time; it hastens to the end—it will not lie. If it seems slow, wait for it; it will surely come; it will not delay.

Joel 2:28
“And it shall come to pass afterward, that I will pour out my Spirit on all flesh; your sons and your daughters shall prophesy, your old men shall dream dreams, and your young men shall see visions.”

Jeremiah 29:11
“For I know the plans I have for you, declares the Lord, plans for welfare and not for evil, to give you a future and a hope.”

1 Chronicles 16:11
Seek the Lord and his strength; seek his presence continually!

1 Corinthians 2:14
The natural person does not accept the things of the Spirit of God, for they are folly to him, and he is not able to understand them because they are spiritually discerned.

1 Corinthians 2:9
But, as it is written, “What no eye has seen, nor ear heard, nor the heart of man imagined, what God has prepared for those who love him.”

1 Samuel 3:1
Now the young man Samuel was ministering to the Lord under Eli. And the word of the Lord was rare in those days; there was no frequent vision.

Acts 1:8
But you will receive power when the Holy Spirit has come upon you, and you will be my witnesses in Jerusalem and in all Judea and Samaria, and to the end of the earth.”

Acts 10:3
About the ninth hour of the day he saw clearly in a vision an angel of God come in and say to him, “Cornelius.”

Acts 16:9
And a vision appeared to Paul in the night: a man of Macedonia was standing there, urging him and saying, “Come over to Macedonia and help us.”

Acts 18:9
And the Lord said to Paul one night in a vision, “Do not be afraid, but go on speaking and do not be silent.”

Acts 2:17
“‘And in the last days it shall be,” God declares, “that I will pour out my Spirit on all flesh, and your sons and your daughters shall prophesy, and your young men shall see visions, and your old men shall dream dreams.”

Acts 2:3
And divided tongues as of fire appeared to them and rested on each one of them.

Acts 9:10
Now there was a disciple at Damascus named Ananias. The Lord said to him in a vision, “Ananias.” And he said, “Here I am, Lord.”

Acts 9:12
And he has seen in a vision a man named Ananias come in and lay his hands on him so that he might regain his sight.

Amos 3:7
For the Lord God does nothing without revealing his secret to his servants the prophets.

Colossians 3:17
And whatever you do, in word or deed, do everything in the name of the Lord Jesus, giving thanks to God the Father through him.

Genesis 1:27
So God created man in his own image, in the image of God he created him; male and female he created them.

Genesis 15:1
After these things the word of the Lord came to Abram in a vision: “Fear not, Abram, I am your shield; your reward shall be very great.”

Genesis 28:12
And he dreamed, and behold, there was a ladder set up on the earth, and the top of it reached to heaven. And behold, the angels of God were ascending and descending on it!

Hebrews 11:1
Now faith is the assurance of things hoped for, the conviction of things not seen.

Hebrews 4:13
And no creature is hidden from his sight, but all are naked and exposed to the eyes of him to whom we must give account.

Jeremiah 1:17
“But you, dress yourself for work; arise, and say to them everything that I command you. Do not be dismayed by them, lest I dismay you before them.”

Jeremiah 14:14
And the Lord said to me: “The prophets are prophesying lies in my name. I did not send them, nor did I command them or speak to them. They are prophesying to you a lying vision, worthless divination, and the deceit of their own minds.”

Jeremiah 23:16
Thus says the Lord of hosts: “Do not listen to the words of the prophets who prophesy to you, filling you with vain hopes. They speak visions of their own minds, not from the mouth of the Lord.”

John 15:16
“You did not choose me, but I chose you and appointed you that you should go and bear fruit and that your fruit should abide, so that whatever you ask the Father in my name, he may give it to you.”

Luke 16:15
And he said to them, “You are those who justify yourselves before men, but God knows your hearts. For what is exalted among men is an abomination in the sight of God.”

Matthew 2:13
Now when they had departed, behold, an angel of the Lord appeared to Joseph in a dream and said, “Rise, take the child and his mother, and flee to Egypt, and remain there until I tell you, for Herod is about to search for the child, to destroy him.”

Matthew 27:19
“Besides, while he was sitting on the judgment seat, his wife sent word to him, ‘Have nothing to do with that righteous man, for I have suffered much because of him today in a dream.'”

Numbers 12:6
And he said, “Hear my words: If there is a prophet among you, I the Lord make myself known to him in a vision; I speak with him in a dream.”

Numbers 24:4
The oracle of him who hears the words of God, who sees the vision of the Almighty, falling down with his eyes uncovered.

Obadiah 1:1
The vision of Obadiah. Thus says the Lord God concerning Edom: We have heard a report from the Lord, and a messenger has been sent among the nations: “Rise up! Let us rise against her for battle!”

Proverbs 15:22
Without counsel plans fail, but with many advisers they succeed.

Psalm 89:19
Of old you spoke in a vision to your godly one, and said: “I have granted help to one who is mighty; I have exalted one chosen from the people.”

Revelation 14:12
Here is a call for the endurance of the saints, those who keep the commandments of God and their faith in Jesus.

Revelation 14:6
Then I saw another angel flying directly overhead, with an eternal gospel to proclaim to those who dwell on earth, to every nation and tribe and language and people.

Revelation 14:7
And he said with a loud voice, “Fear God and give him glory, because the hour of his judgment has come, and worship him who made heaven and earth, the sea and the springs of water.”

Revelation 15:2
And I saw what appeared to be a sea of glass mingled with fire—and also those who had conquered the beast and its image and the number of its name, standing beside the sea of glass with harps of God in their hands.

Revelation 15:5
After this I looked, and the sanctuary of the tent of witness in heaven was opened.

Revelation 19:9
And the angel said to me, “Write this: Blessed are those who are invited to the marriage supper of the Lamb.” And he said to me, “These are the true words of God.”

Revelation 22:1
Then the angel showed me the river of the water of life, bright as crystal, flowing from the throne of God and of the Lamb.