1 Corinthians 7:15
“But if the unbeliever leaves, let it be so. The brother or the sister is not bound in such circumstances; God has called us to live in peace.”

Explanation and Commentary on 1 Corinthians 7:15

Paul was responding to a question about marriage from the Christians in the city of Corinth. He begins this set of verses by telling people that it would be good if they had the power to avoid sexual relations altogether, but that most people are meant to be married (1 Corinthians 7:7). He says that those that are married should stay married. God originally designed man and woman to marry, and what God has joined together, no one should separate (Matthew 19:6).

Marriage between a Christian and non-Christian was common at the time of Paul’s writing among the Greeks and Romans where some people were converting to Christianity. Jesus taught that anyone who divorces for any reason other than sexual immorality commits adultery when he or she remarries (Matthew 19:8-9). Jesus considered polygamy or any sexual relations outside of a marriage between one man and one woman to be sexually immoral.

Jesus’s teaching differs from Mosaic law, which recognized polygamy and concubinage as legitimate. Moreover, under Mosaic law, a husband was permitted to divorce his wife through the issuance of a certificate of divorce if he found `erwath dabhar (Hebrew) or “something indecent about her” (Deuteronomy 24:1-4). Up for debate is the correct interpretation of what “indecent” meant. The school of Shammai among the Jewish rabbis taught that only adultery could justify divorce. The school of Hillel taught that divorce could be granted for any trivial reason, such as bad cooking, and other rabbis even taught that a man could divorce his wife if he found someone he liked better.

Breaking Down the Key Parts of 1 Corinthians 7:15

#1: “But if the unbeliever leaves, let it be so.”
This part of the verse is referring to if a non-Christian leaves his or her spouse.

#2: “The brother or the sister is not bound in such circumstances…”
The Christian spouse is released from the covenant of marriage.

NIV
But if the unbeliever leaves, let it be so. The brother or the sister is not bound in such circumstances; God has called us to live in peace.

NLT
But if the husband or wife who isn’t a believer insists on leaving, let them go. In such cases the believing husband or wife is no longer bound to the other, for God has called you to live in peace.

ESV
But if the unbelieving partner separates, let it be so. In such cases the brother or sister is not enslaved. God has called you to peace.

KJV
But if the unbelieving depart, let him depart. A brother or a sister is not under bondage in such cases: but God hath called us to peace.

NKJV
But if the unbeliever departs, let him depart; a brother or a sister is not under bondage in such cases. But God has called us to peace. 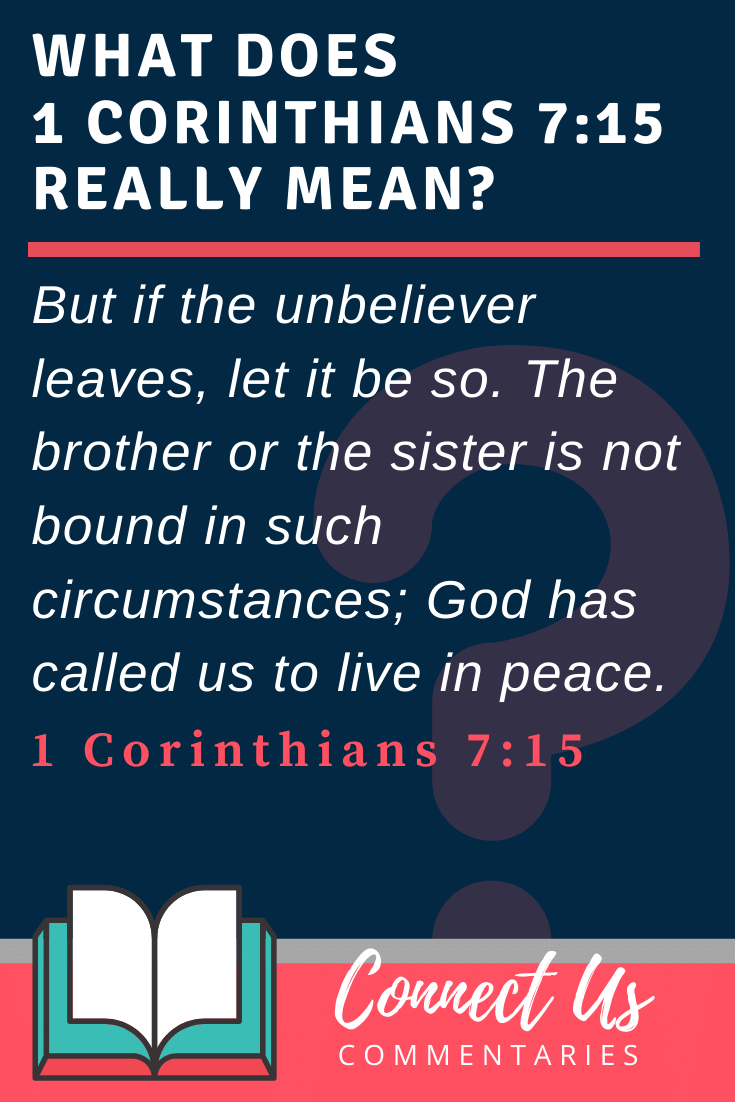