The word grace is found 138 times in the Old and New Testament. The image below reveals the locations of each occurrence. This cool graph starts with Genesis in the top left and ends with Revelation in the bottom right. 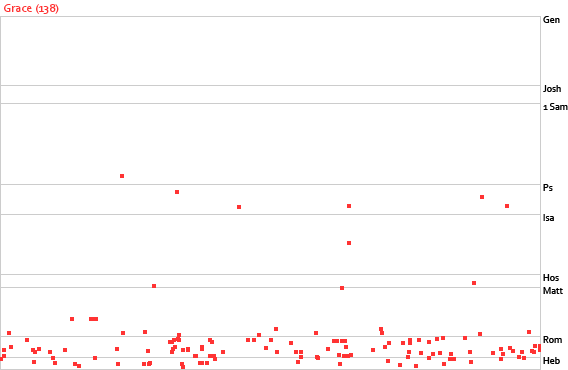 Here are the 40 most important Bible scriptures on God’s grace.

Hebrews 4:16
Let us then with confidence draw near to the throne of grace, that we may receive mercy and find grace to help in time of need.

James 4:6
But he gives more grace. Therefore it says, “God opposes the proud, but gives grace to the humble.”

Romans 11:6
But if it is by grace, it is no longer on the basis of works; otherwise grace would no longer be grace.

Titus 2:11
For the grace of God has appeared, bringing salvation for all people.

1 Corinthians 15:10
But by the grace of God I am what I am, and his grace toward me was not in vain. On the contrary, I worked harder than any of them, though it was not I, but the grace of God that is with me.

1 Peter 4:10
As each has received a gift, use it to serve one another, as good stewards of God’s varied grace.

1 Peter 5:10
And after you have suffered a little while, the God of all grace, who has called you to his eternal glory in Christ, will himself restore, confirm, strengthen, and establish you.

2 Corinthians 12:9
But he said to me, “My grace is sufficient for you, for my power is made perfect in weakness.” Therefore I will boast all the more gladly of my weaknesses, so that the power of Christ may rest upon me.

2 Corinthians 8:9
For you know the grace of our Lord Jesus Christ, that though he was rich, yet for your sake he became poor, so that you by his poverty might become rich.

2 Corinthians 9:8
And God is able to make all grace abound to you, so that having all sufficiency in all things at all times, you may abound in every good work.

2 Peter 1:2
May grace and peace be multiplied to you in the knowledge of God and of Jesus our Lord.

2 Peter 3:9
The Lord is not slow to fulfill his promise as some count slowness, but is patient toward you, not wishing that any should perish, but that all should reach repentance.

2 Timothy 1:9
Who saved us and called us to a holy calling, not because of our works but because of his own purpose and grace, which he gave us in Christ Jesus before the ages began.

2 Timothy 2:1
You then, my child, be strengthened by the grace that is in Christ Jesus.

Acts 15:11
But we believe that we will be saved through the grace of the Lord Jesus, just as they will.”

Acts 20:24
But I do not account my life of any value nor as precious to myself, if only I may finish my course and the ministry that I received from the Lord Jesus, to testify to the gospel of the grace of God.

Acts 20:32
And now I commend you to God and to the word of his grace, which is able to build you up and to give you the inheritance among all those who are sanctified.

Ephesians 1:6
To the praise of his glorious grace, with which he has blessed us in the Beloved.

Ephesians 1:7
In him we have redemption through his blood, the forgiveness of our trespasses, according to the riches of his grace.

Ephesians 4:7
But grace was given to each one of us according to the measure of Christ’s gift.

Galatians 5:4
You are severed from Christ, you who would be justified by the law; you have fallen away from grace.

Genesis 6:8
But Noah found favor in the eyes of the Lord.

Hebrews 2:9
But we see him who for a little while was made lower than the angels, namely Jesus, crowned with glory and honor because of the suffering of death, so that by the grace of God he might taste death for everyone.

John 1:14
And the Word became flesh and dwelt among us, and we have seen his glory, glory as of the only Son from the Father, full of grace and truth.

John 1:16
And from his fullness we have all received, grace upon grace.

John 1:17
For the law was given through Moses; grace and truth came through Jesus Christ.

Psalm 84:11
For the Lord God is a sun and shield; the Lord bestows favor and honor. No good thing does he withhold from those who walk uprightly.

Revelation 22:21
The grace of the Lord Jesus be with all. Amen.

Romans 3:24
And are justified by his grace as a gift, through the redemption that is in Christ Jesus.

Romans 5:20
Now the law came in to increase the trespass, but where sin increased, grace abounded all the more.

Romans 5:21
So that, as sin reigned in death, grace also might reign through righteousness leading to eternal life through Jesus Christ our Lord.

Romans 5:8
But God shows his love for us in that while we were still sinners, Christ died for us.

Titus 3:7
So that being justified by his grace we might become heirs according to the hope of eternal life.