Explanation and Commentary on 1 Corinthians 13:11

This verse comes within the great love passage. The basic message is that “love never fails” (1 Cor 13:8). The context for v.11 is that gifts of the Spirit, like prophecy and tongues, and knowledge will fade away with the coming of the New Heavens and New Earth.  But love is eternal and will not fade away.

Right now, prophecy, tongues, and knowledge are “in part.” There is an imperfection in how we experience these gifts of the Holy Spirit.  But love right now is not meant to be “in part.”  It is the main thing and is meant to be experienced now and forever in fullness as we “walk in love” (Eph 5:2).

Most Christians believe that because it is hard to love others as Jesus loves us (1 John 3:16) then we need only love “in part.”  The kind of love Jesus calls us to show for God and for our neighbor, even our enemies, is very special and comes from the Father. It is the love that the Father, Son, and Holy Spirit share for one another. It is the love that God sets upon us, not because of our goodness, but because of his.

“Childhood ways,” then, are knowing “in part.”  The ways of manhood will be known fully. This will happen when Christ returns, but in the meantime, “love never fails.”

Breaking Down the Key Parts of 1 Corinthians 13:11

#1 “When I was a child,”
Jesus generally points to children as an example of the kind of faith, love, and trust for Father that he wants to see in his disciples.  In this example, Paul is referring to the ways of childhood as an immaturity to be left behind.

#2 “I talked like a child, I thought like a child, I reasoned like a child.”
Again, while Jesus had a way of thinking about children, that their talk, thoughts, and reasoning would be something to imitate, Paul is talking about the immaturity of children.  He wants his hearers to grow up into maturity and “put childish ways behind…”

#3 “When I became a man, I put the ways of childhood behind me.”
Referring to the fact that we must grow into adulthood and adopt responsibility, Paul is making an analogy. While we should put “childish” ways behind us, keeping in mind Jesus’ call to “childlike faith,” that is not really Paul’s point. His point is that partial spiritual reality, made dim by living in the midst of a fallen world in an age still ruled by Satan, will be put behind us when the world reaches the maturity that will come with the return of Christ, and the judgment of evil and imperfection. For now, the one perfect concept is love. It is the greatest of the three constants, faith, hope, and love because it will remain long after faith and hope are no longer necessary.

NLT
When I was a child, I spoke and thought and reasoned as a child. But when I grew up, I put away childish things. 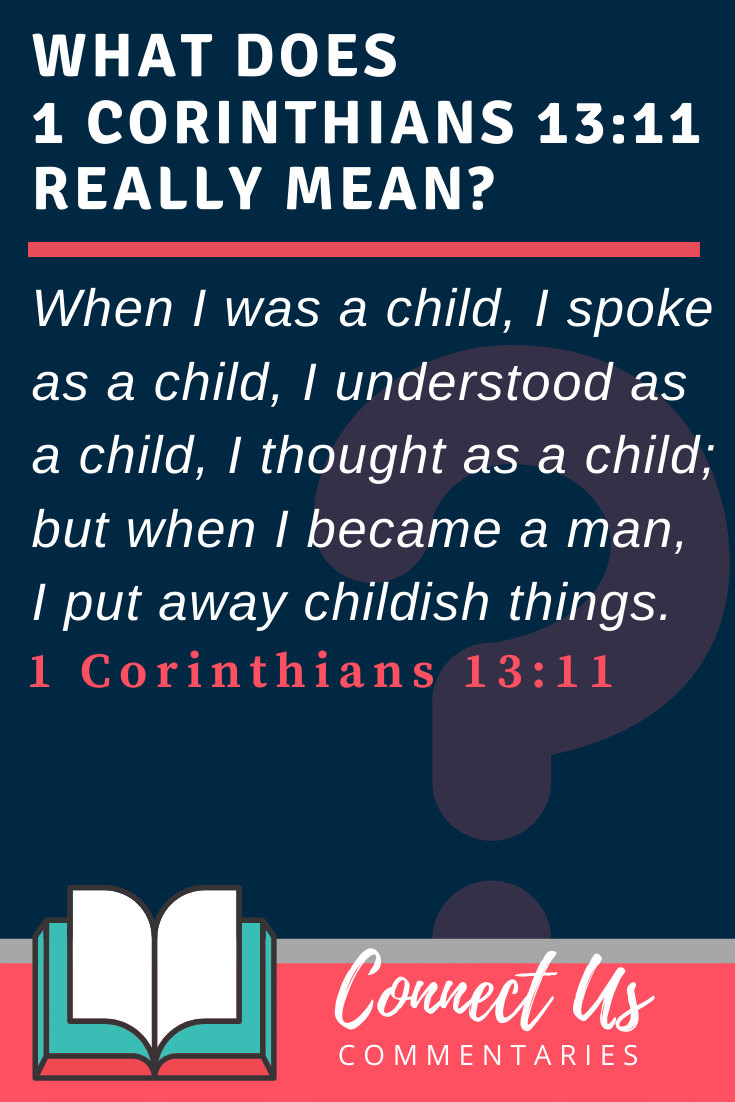