Explanation and Commentary on 1 Corinthians 13:8

At some time, the spiritual gifts of prophecy, tongues, and knowledge will not exist, but Godly love will still be there.

Paul spoke of the meaning of Godly love in 1 Corinthians 13:4-8. Versus 4-8 should be read as a group to give the full picture of the characteristics needed to exhibit the grace of Godly love. These characteristics are patience, kindness, not envying, not boasting, not being prideful, not dishonoring others, not being self-seeking, not being easily angered, not keeping record of wrongs, not delighting in evil, always protecting, always trusting, always hoping, always persevering, and never failing.

Paul named a subset of the spiritual gifts as the ones that were to disappear. The entire group of spiritual gifts were wisdom, knowledge, faith, the gift of healing, the working of miracles, prophecy, the discerning of spirits, different kinds of tongues and the interpretation of tongues (1 Corinthians 12:8-10). Some commentators believe Paul only names these three spiritual gifts because they emphasized the revelation of God.

The Bible is silent on when the spiritual gifts are to disappear. Various commentators have tried to fill in that gap in the Bible. There are two major views on the timing of cessation of these gifts. One is that it is when the Lord returns. The other is when all the books were added to the Bible, and no more could ever be added. Some refer to this as the “closing of the canon” or the “completion of the canon.” It is commonly believed that all churches in the West accepted the New Testament canon as closed after the Damascene Council of Rome in A.D. 332 and the Third Council of Carthage in A.D. 397. Churches in Greece then accepted it by the year 500.

Regardless of this gap in our understanding, Paul’s point was to explain that true love towards God and our fellow humans is preferable to all the spiritual gifts. Spiritual gifts were given to the Corinthians to honor God, and there will be no need for them at some later date.

Breaking Down the Key Parts of 1 Corinthians 13:8

#1: “Love never fails.”
True Godly love is permanent and continues to have the characteristics Paul told us in 1 Corinthians 13:4-8 even in tough times. If you always love, you can never hate another person. You can hate evil itself (Psalm 97:10, Romans 12:9, Proverbs 13:5, Proverbs 8:13).

#2: “But where there are prophecies, they will cease…”
Predictions of the future, or interpretations of Scripture, were one of the spiritual gifts that would disappear at some point in time.

#3: “…where there are tongues, they will be stilled…”
The ability to speak in languages without learning them was another of the spiritual gifts that would disappear.

#4: “…where there is knowledge, it will pass away.”
The last spiritual gift Paul mentioned that would cease to exhibit was having knowledge beyond ordinary knowledge such that one could understand things that were mysteries to others.

NLT
Prophecy and speaking in unknown languages and special knowledge will become useless. But love will last forever! 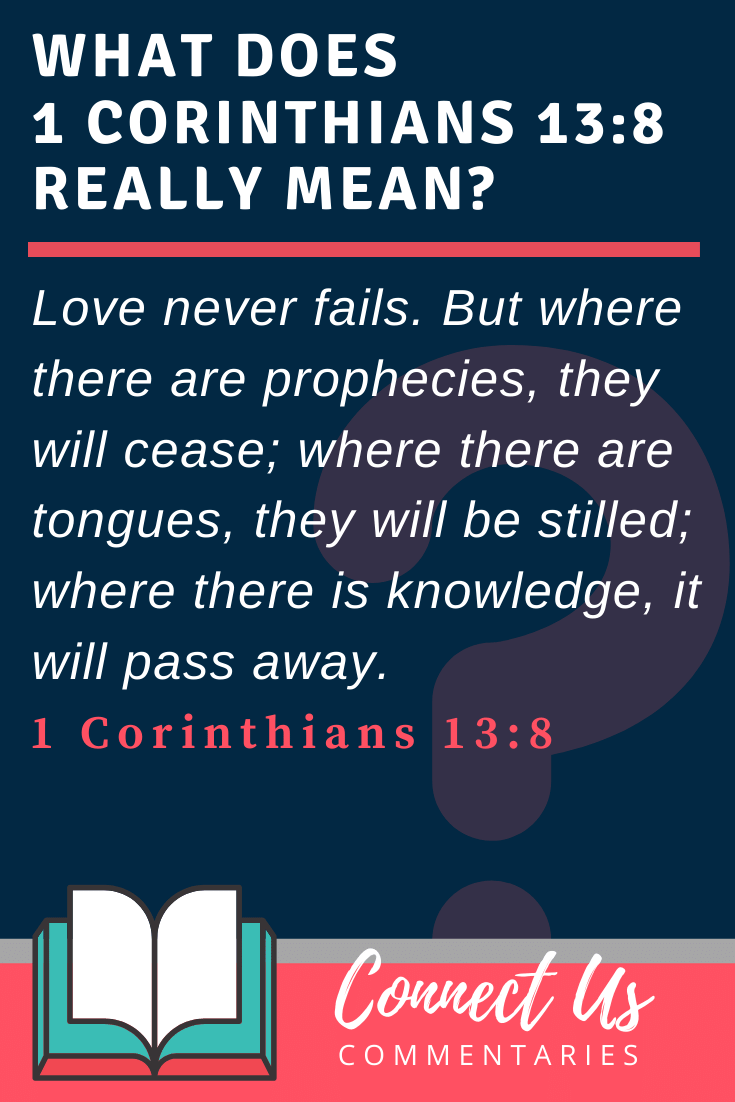