1 Timothy 5:8
“Anyone who does not provide for their relatives, and especially for their own household, has denied the faith and is worse than an unbeliever.”

Explanation and Commentary of 1 Timothy 5:8

The principle of stewardship that runs through the Old and New Testaments begins with the self (2 Thes 3:10) and extends outwardly from there. God intended from the beginning that the first level of responsibility beyond one’s self is one’s immediate family, and then one’s extended family, and then one’s church, then community, then state, and then the world. Jesus rebuked the Pharisees for missing this point (Mt 15:5). The problem here seems to be the widows. Who should be on the list of those supported by the church? Only those who had no family to support them, of which there would be plenty.

Rather than see this just as a blind spot, Paul saw it as possible evidence of unbelief. Only, to Paul, it was worse than unbelief, because of the level of knowledge in the Church. In short, a Christian would have known better. It could also be the case that the unbelievers were better at caring for their poor family members better than the Church. Maybe those in the local church were in the habit of leaving ministry to the poor to the institution, but this was obviously proving to be a drain on resources and did not capture God’s heart for the way we would think of caring for the poor.

A similar problem in today’s society is the tendency for people to leave care for the needy up to the state. Especially when it comes to the poor in one’s own family, and especially in one’s immediate household, it seems God reckons it a manifestation of belief in him to take responsibility for the needy widow, or anyone else who is truly unable to care for themselves, which is always preferable (1 Thes 3:10).

Breaking Down the Key Parts of 1 Timothy 5:8

#1 “Anyone…”
Sometimes this has been only directed toward men, who are the heads of their households, but later in the paragraph Paul will direct his comments toward women who are keepers of their homes, there speaking of not just financial care, but also physical care. Anyone is on the hook for grasping God’s heart in this ministry of mercy.

#2 “…who does not provide for their relatives,”
This does not command us to provide for relatives who are supposed to be providing for themselves, as this would enable their sin of sloth, but for those who are truly in need, family is the first line of care, freeing the mercy resources in the local church for those with no family support.

#3 “especially for their own household,”
Spheres of responsibility are hierarchical and must be prioritized as such. First, provide for your own needs, then work out from there, starting with your immediate household.

#4 “has denied the faith…”
To fail in this area is to have grossly misunderstood the heart of God, our Father, who provides everything we need. A key part of his provision is that which comes through those of our family members who have been blessed with enough to share.

#5 “…and is worse than an unbeliever.”
God made us to work and to provide for ourselves and those in our households. To know God is to understand this. To not understand this is to not know God. In fact, if even unbelievers get this, then we are worse than them in this area. Whenever we in the Church can look at the unbelieving world and see that they are living out the heart of God better than we are, we should be ashamed and then learn by their example. God, who uses even unbelievers for his purposes, has made them an agent of common grace.

NIV
Anyone who does not provide for their relatives, and especially for their own household, has denied the faith and is worse than an unbeliever.

NLT
But those who won’t care for their relatives, especially those in their own household, have denied the true faith. Such people are worse than unbelievers.

ESV
But if anyone does not provide for his relatives, and especially for members of his household, he has denied the faith and is worse than an unbeliever.

KJV
But if any provide not for his own, and specially for those of his own house, he hath denied the faith, and is worse than an infidel.

NKJV
But if anyone does not provide for his own, and especially for those of his household, he has denied the faith and is worse than an unbeliever. 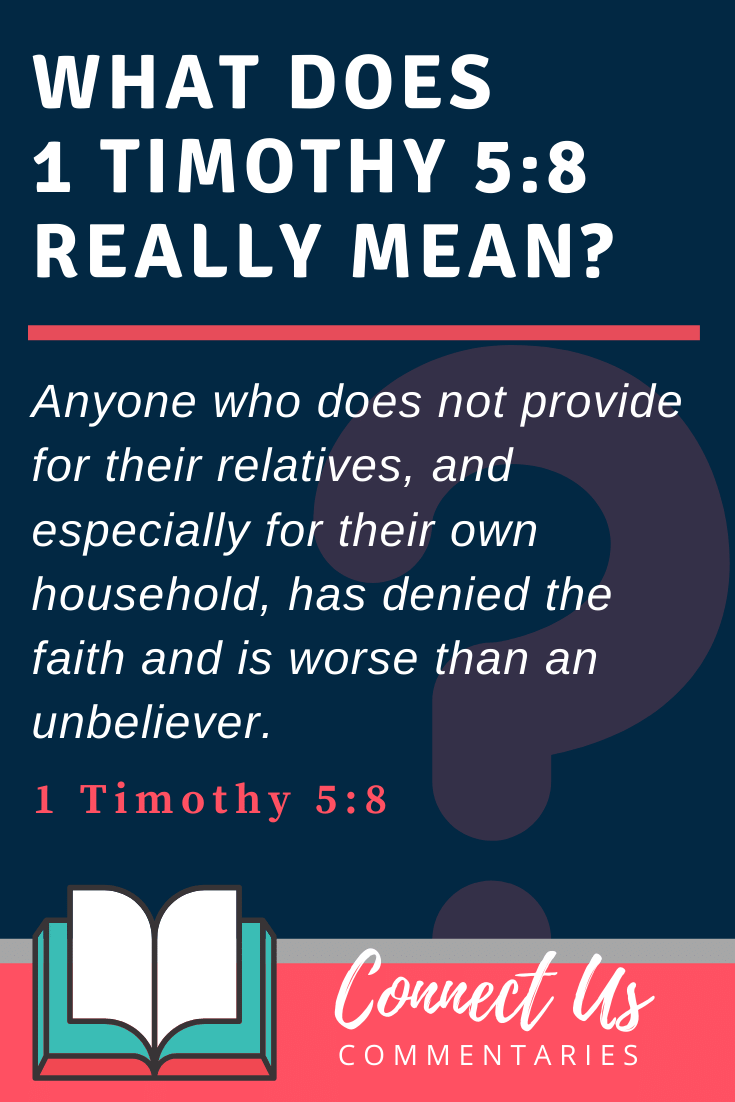