Deuteronomy 23:2
“No one born of a forbidden marriage nor any of their descendants may enter the assembly of the Lord, not even in the tenth generation.”

Explanation and Commentary of Deuteronomy 23:2

In no uncertain terms, the Israelites were not to marry outside the nation, which was as good as marrying outside the faith. God does not call us to discriminate by race, but when it comes to who we will be yoked in marriage with, he absolutely calls us to discriminate by faith, the reason being that an unbelieving spouse will make continuing to follow God extremely difficult, and for some, impossible. Not only that, but a marriage that is not founded on biblical principles will be a trial, to say the least. Another practice that was especially abominable was marriages by any sort of incest (Lev 18:8-18).

Those who were born of those marriages were not to enter the “assembly of the Lord.” To understand this, remember that the laws of the Old Testament for the Jews were part public health, part ceremonial, and part moral. The separation between pure and impure was keenly observed by God’s command as a way of conditioning the hearts of an unregenerate and hard-hearted people. The need for separation, blood, and atonement would prepare the collective consciousness for the coming of Christ, who would be the fulfillment of all the law. God considers each and every person, regardless of background, parentage, and blood individually, and each and every Christian is saved by grace through faith alone.

However it may seem when we study the Old Testament laws, God showed his heart for every sort of outcast when he sent his Son to die, so that whosoever would believe in him “would not perish, but have everlasting life” (Jn 3:16).

Breaking Down the Key Parts of Deuteronomy 23:2

#2 “…may enter the assembly of the Lord, not even in the tenth generation.”
While God shows unequivocally by the sacrifice of his Son that he “shows no partiality” (Acts 10:34) and has a plan to bring all individuals into his kingdom who repent and believe in the name of Jesus, regardless of race, parentage, or anything else in the past, in this particular dispensation God was keen to teach the Israelites the severity of this breach considering the holiness of their association with God.

NIV
No one born of a forbidden marriage nor any of their descendants may enter the assembly of the Lord, not even in the tenth generation.

NLT
If a person is illegitimate by birth, neither he nor his descendants for ten generations may be admitted to the assembly of the Lord. 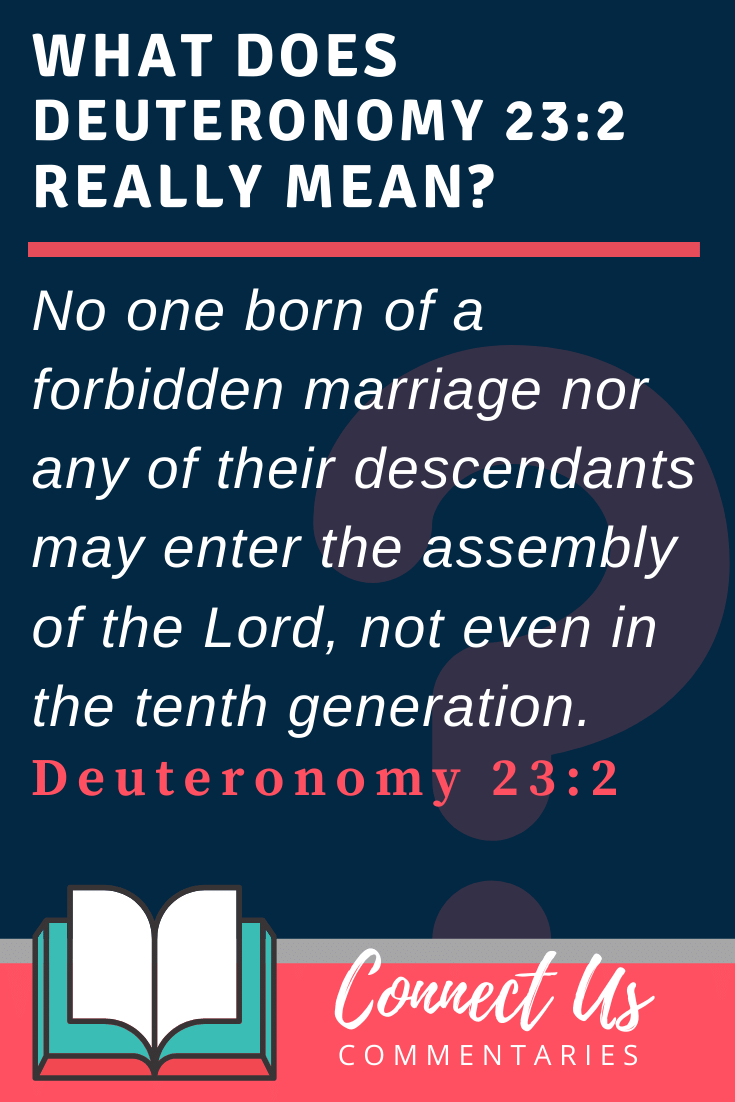