Galatians 3:13
“Christ redeemed us from the curse of the law by becoming a curse for us, for it is written: ‘Cursed is everyone who is hung on a pole.’”

Explanation and Commentary of Galatians 3:13

Paul has been explaining that it was and is impossible for anyone to be saved by works of the law and that everyone under the law is cursed. Therefore the only way to be redeemed is through Christ who removed our curse by “becoming a curse for us” when he was “hung on a pole.” God, the author and source of justice, is such a reality that he himself is bound to reality. It is impossible for God to oppose his own nature. His nature is perfection, truth, love, and justice. This is why there would be no way to forgive sinners, to make them righteous, apart from the blood of Christ. There is no way to lift a curse than to transfer it, which he did, to his beloved Son.

This is a deep and mysterious revelation. Paul goes on to explain that in this way, the blessing of Abraham is extended to the Gentiles (Gal 3:14). Any who would believe in Jesus will not perish, but have everlasting life (Jn 3:16). Those who would like God to just forgive, without the shedding of blood, do not understand the reality and logic of being. No one gets away with anything in the universe. This is why all other religions have invented ways of dealing with this truth (karma, etc.). But God, who is rich in mercy (Eph 2:4), thought of a way before time began. There is nothing left to do but say “yes” to his free gift, and then live in and for him for eternity, praising his glorious name forever and ever.

Breaking Down the Key Parts of Galatians 3:13

#1 “Christ redeemed us from the curse of the law…”
Jesus Christ came to seek and save what was lost. We were lost because of sin, and sin was made utterly sinful by the introduction of law we were hopeless to keep. The law brought accountability for our wretchedness that could only lead us to damnation if not for the grace of God, and the astonishing plan to save the world from sin and the law through the death of his Son, Jesus, who redeemed us for himself and imputed to us his righteousness.

#2 “…by becoming a curse for us,”
He became a curse so deep and powerful that it replaced our curse and absorbed the wrath of God for the sin of all who would believe. The sinless, spotless lamb, the scapegoat, the substitute, has taken on all our sin and the curse of sin, though he never sinned.

#3 “for it is written: ‘Cursed is everyone who is hung on a pole.’”
Christ’s death was the fulfillment of a prophecy (Deut 21:23). It was not just that he was hung on a cross, for many others were also crucified by the Romans, but that he was the only human who ever lived that did not deserve the wrath of God because he did not sin in all his life. Having been born of the virgin and the Holy Spirit, he was not brought forth in sin, and he never invited sin in by sinning (1 Cor 5:21).

NIV
Christ redeemed us from the curse of the law by becoming a curse for us, for it is written: “Cursed is everyone who is hung on a pole.”

NLT
But Christ has rescued us from the curse pronounced by the law. When he was hung on the cross, he took upon himself the curse for our wrongdoing. For it is written in the Scriptures, “Cursed is everyone who is hung on a tree.”

ESV
Christ redeemed us from the curse of the law by becoming a curse for us—for it is written, “Cursed is everyone who is hanged on a tree.”

KJV
Christ hath redeemed us from the curse of the law, being made a curse for us: for it is written, “Cursed is every one that hangeth on a tree.”

NKJV
Christ has redeemed us from the curse of the law, having become a curse for us (for it is written, “Cursed is everyone who hangs on a tree.”) 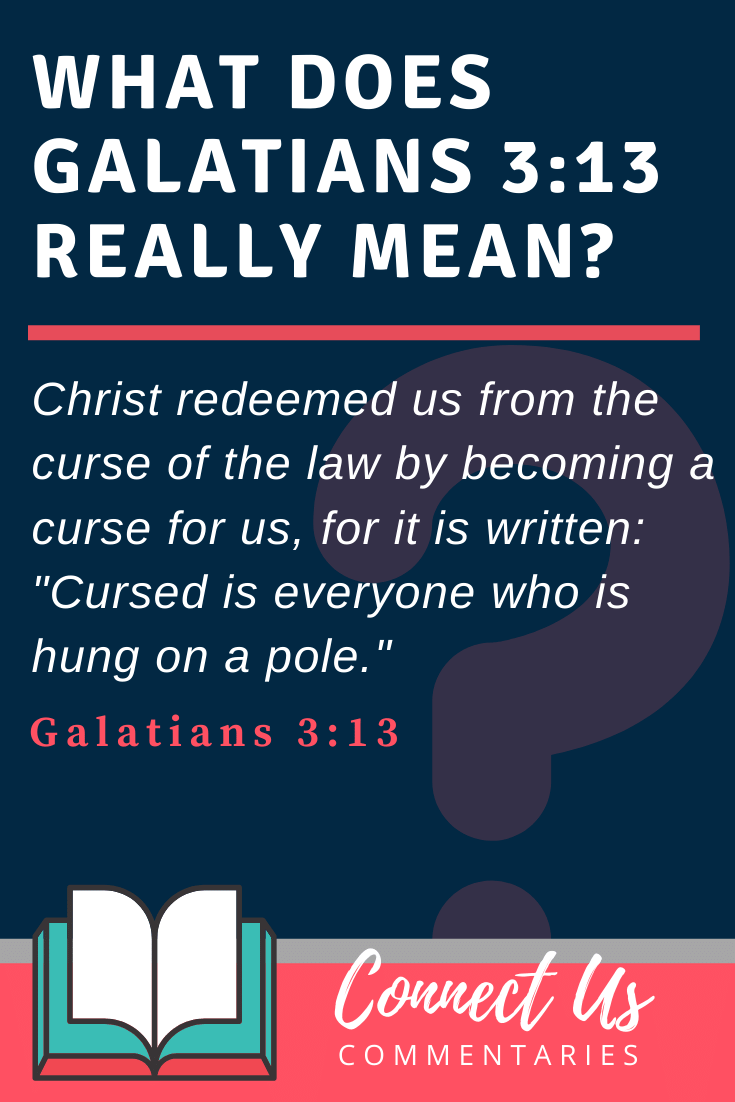