Galatians 5:13
“You, my brothers and sisters, were called to be free. But do not use your freedom to indulge the flesh; rather, serve one another humbly in love.”

Explanation and Commentary of Galatians 5:13

Paul’s great contribution is to explain the doctrine of freedom in Christ by faith in his death and resurrection for the forgiveness of our sins. But lest anyone make the mistake of thinking that God does not care how we act, Paul is quick to remind his readers that our freedom is not intended to cause us to sin, but rather to love God and one another, to be humble, and to serve. This is the essence of the Christian life. Jesus said that it was for freedom that he came. He said that whoever the Son sets free is free indeed (Jn 8:36). This statement and the one by Paul beg the question, freedom from what?

First of all, we have been set free from slavery to sin. The Bible teaches that because of our fallen nature, there is sin in our very flesh that compels us to obey it. Before we are saved, we can really only check one sin with another. For instance, if you are committing the sin of gluttony, you could keep it in check with vanity. But in Christ, we are made alive by his Spirit within us, and another way of saying that is that we are set free from bondage to sin. We still have sin in our flesh, but we have been given power over it by the Spirit.

Additionally, we have been set free from the curse of the law. Paul makes clear that the law was given as a babysitter, a guardian. It shows us a manifestation of righteousness, and in that sense it is good, but since we are unable to keep it, it is a harsh taskmaster who will never set us free, but will be our undoing should we decide to rely upon it.

Breaking Down the Key Parts of Galatians 5:13

#1 “You, my brothers and sisters,”
Paul is addressing fellow Christians. The Greek says only “brothers,” but it is not wrong to assume “sisters” in the same way that mankind includes womankind.

#2 “were called…”
We should take great joy in the truth that we belong to the God who calls us chosen. Jesus said that his disciples were drawn to him by God (Jn 6:44), and such, cannot be taken away from him.

#3 “…to be free.”
This is amazing. While it is fine and good for Paul and us to refer to ourselves as bondservants of Christ (1 Cor 7:22), it is a service of freedom.

#4 “But do not use your freedom to indulge the flesh;”
This freedom is true freedom. As image-bearers of God, saved and set free, filled with the Holy Spirit, we must still make choices in our freedom, choices for which we will be held accountable.

#5 “rather, serve one another humbly in love.”
Because we are free, we can serve others with love and humility. It is our bondage to sin, specifically pride, that would prevent us from doing so.

NIV
You, my brothers and sisters, were called to be free. But do not use your freedom to indulge the flesh[a]; rather, serve one another humbly in love.

ESV
For you were called to freedom, brothers. Only do not use your freedom as an opportunity for the flesh, but through love serve one another.

KJV
For, brethren, ye have been called unto liberty; only use not liberty for an occasion to the flesh, but by love serve one another.

NKJV
For you, brethren, have been called to liberty; only do not use liberty as an opportunity for the flesh, but through love serve one another. 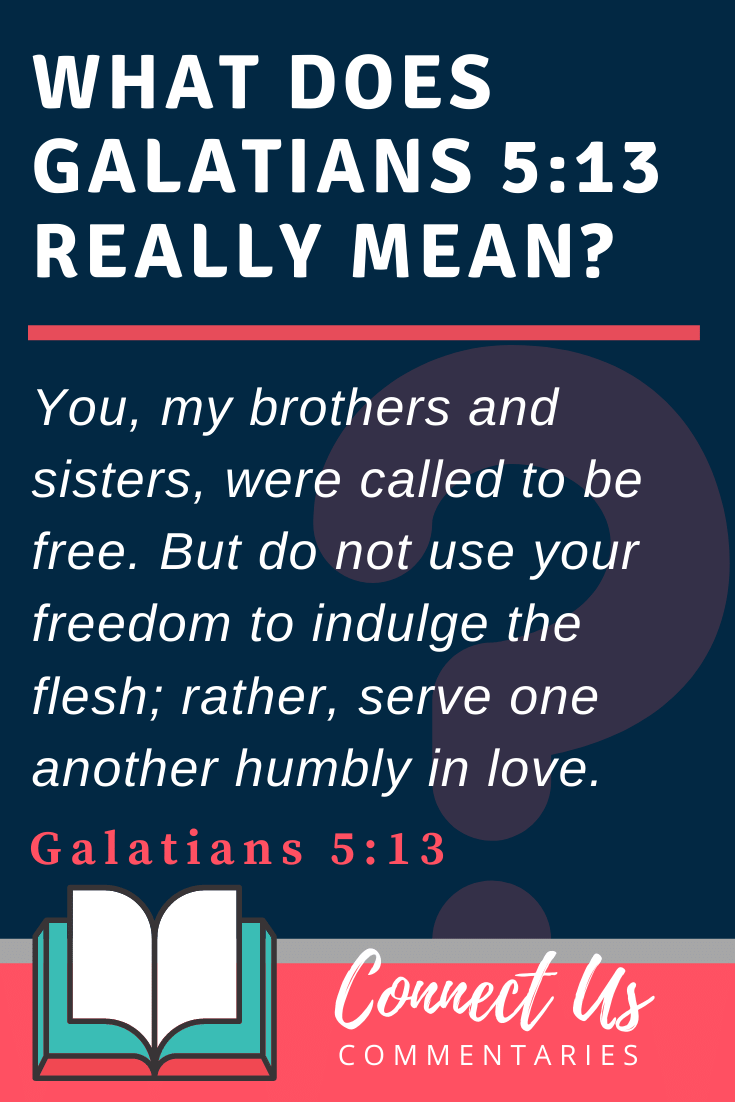