Jesus declared that John the Baptist was the greatest human being who ever lived because he pronounced the coming of Jesus Christ as the Messiah Who would save the people of the world and redeem their sins. John’s ministry did not build up his own glory but instead pointed to the glory of the Son of God accomplishing the will of the Father.

As Jesus’ earthly ministry became more widely known, John’s ministry began to decline, and some of his followers questioned whether or not they should follow what Jesus taught. John firmly placed Jesus at the forefront, and told the people in John 3:30, “He must increase, but I must decrease.”
This statement of John the Baptist has a simple explanation with profound implications for us today.

The Role of John the Baptist in Jesus’ Ministry

John the Baptist fulfilled a prophecy in the Old Testament that foretold one who would come before the Messiah and prepare the people for His arrival. John’s public ministry and his baptism of repentance were meant to herald the coming Christ, the One Who was promised to redeem the people of Israel and restore the kingdom of God on earth.

However, some thought that John himself was the Messiah. After all, he publicly proclaimed the kingdom of God and admonished the people to repent of their sins. When they asked him if he was indeed the Messiah, he flatly denied it and said that he would instead point to the real Christ. His message was ultimately fulfilled when Jesus came to be baptized; John told the people that Jesus was the One Who would take away the sins of the world. John was not the one they had waited for, but he was God’s appointed messenger.

John as a Servant

When Jesus became more famous with the people, they began to flock to Him. This was common for some rabbis or other teachers who wanted to gain a public following, and Jesus’ words carried great authority along with the signs and miracles He performed. Many of John’s followers then began to follow Jesus directly after John had so publicly proclaimed that Jesus was the One he had spoken of. Andrew, one of Jesus’ twelve disciples, left the ministry of John the Baptist and brought his brother Peter and his friends James and John to follow Jesus.

These and other disciples were baptizing in the Name of Jesus just down the river from where John continued his ministry and public teachings about the Messiah. Some questioned whether or not their baptism was valid since John had been baptizing longer and this young rabbi seemed to be stealing John’s authority. John’s reply was an important model for us.

He maintained his position that he was never to be the focus of everyone’s attention. He then spoke of himself as one of the friends of a groom who is waiting for his bride; John taught that the role of the groomsman (or friend of the groom) is simply to celebrate the joy of the husband and wife, not to take any glory for himself. Then he made the now-famous statement, “He must increase, but I must decrease.”

John recognized that he was never meant to be in the spotlight. The people no longer had to wait for the promised Messiah to come; He was there with them! John was overjoyed to step out of the spotlight and redirect the people to Jesus. He knew that that was what was God commanded of him, and he willingly submitted to God’s plan for him.

Now that Jesus had begun to teach publicly and draw closer to His death on the cross – which was His reason and purpose for coming to earth – John was meant to fade into the background and give all the glory back to Him. His role was to selflessly point others to Jesus and not keep anybody for himself, instead reflecting all glory back to God.

Our Role as Friends of the Bridegroom

So how can we apply John’s lesson in our own lives?

The simple answer is, it’s not about us. No amount of work or service on our part can be greater than the work that Jesus does in the hearts and lives of those that He saves. The message of God should never be obscured or contorted by a message of our own making. We are commanded to let the light of the Gospel shine through in all its brilliance, and let God take all the glory and praise for what He has done.

Every part of our lives should make much of the Lord. Worship is about more than just singing songs on Sunday mornings; it is about proclaiming the goodness and mercy of the Father through our words and our actions. When we do this with the right heart and motivation, we don’t care who notices us in the work. Instead, our only concern is making sure that others see God working through us.

God can use anybody to accomplish His will. We are graciously given a part to play, and He blesses us by making us His messengers for the good news of salvation and redemption. However, when we bring people’s attention away from the Gospel and instead place it on ourselves, our ministries, our buildings, our abilities, or our message, we distract from the glory of God and instead get people to look at us first. This is not what John preached, and it is not the example the disciples lived out after Jesus ascended into heaven and charged them with taking the Gospel to the ends of the earth.

Be grateful the next time God gives you an opportunity to speak for His Name, but do not take any glory or credit for yourself. Instead, seek to increase the power of God flowing through you and decrease your own glory so as not to distract from the love of the Father. 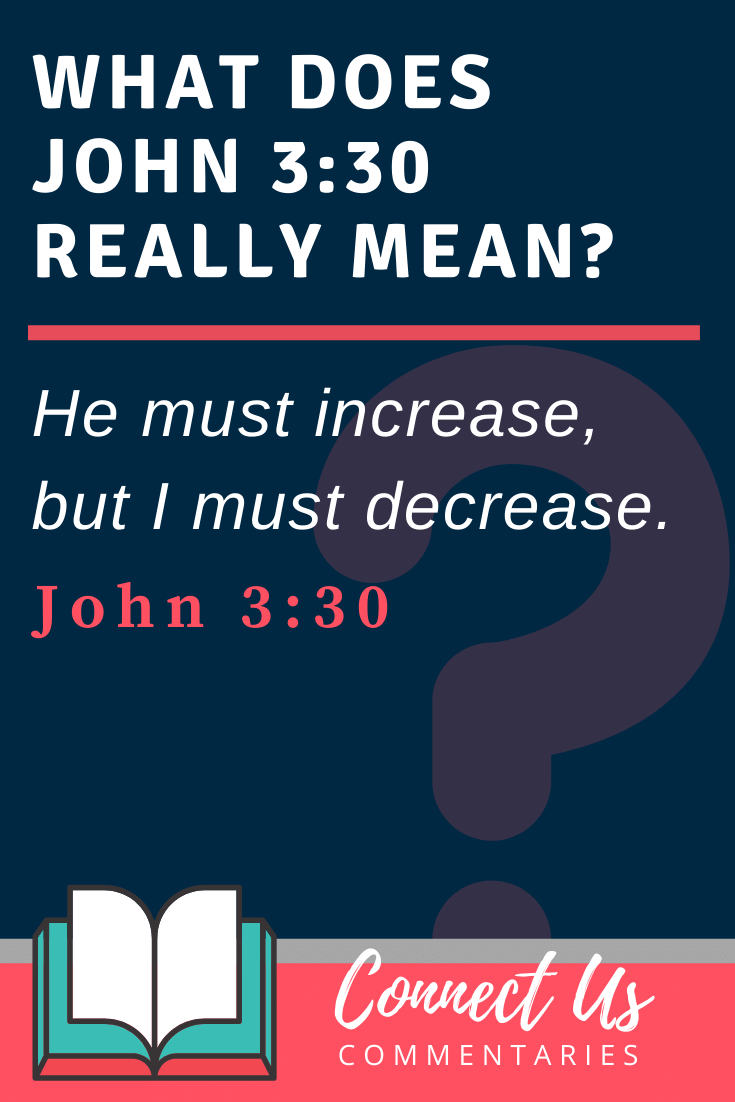