Luke 12:49
“I came to cast fire on the earth, and would that it were already kindled!”

Explanation and Commentary of Luke 12:49

With this curious statement, Jesus reveals a key part of his purpose. The context gives the meaning. Just after this, he speaks of the baptism that he will suffer and of his great distress in anticipation of it. We can only assume he is speaking of the cross. Along with being abandoned, rejected, brutally tortured, and crucified, he will have to take the sin of the world into his being, and then experience the wrath of his Holy Father for that sin. This will have the effect of casting fire on the earth and drawing a line between the world and the Church, believers and unbelievers, God-lovers, and God-haters.

He is anxious to be about his business, not only to get through the severe suffering for himself that it will entail, but also because God’s purposes are good and are the ultimate remedy for the great tragedy of sin since the garden. Jesus is eager to see the will of God accomplished, and so should we be eager for the same. Perhaps for us, the question would be, do we want to see Jesus return to finish his work, though it means the end of things as we know? Undoubtedly, some who are suffering in this life, especially from injustice, will say, “Yes Lord, come soon!” Others, who are enjoying this good life that God has given us, will need to have the faith to pray that Jesus would return. Be comforted by the fact that whatever we like about this world and our current existence pales in comparison to what it will be like in the new heavens and the new earth. On-the-other hand, all of us know and love unbelievers for whom we fear should the Lord return today. It is good that we can trust his sovereign will and judgment in the matter of when to send his Son again from heaven.

Breaking Down the Key Parts of Luke 12:49

#1 “I came…”
The people of God waited for centuries for the Advent of the Messiah when he first came in the form of a baby in a manger to the sound of a heavenly worship chorus and the bleating of sheep. It probably started to feel like he wasn’t coming, until he did!

#2 “…to cast fire on the earth,”
Jesus may have been speaking of the literal fire that will cleanse the earth before the remaking of it into the new earth that we will live on with God for eternity. But from what follows, it also seems that he was speaking of the conflict that will occur between his faithful followers and those who will oppose them.

#3 “…and would that it were already kindled.”
Jesus himself was anxious to see it through. As for the next stage for us when he returns, even he was not made aware of the time by his Father (Mt 24:36).

NIV
“I have come to bring fire on the earth, and how I wish it were already kindled!”

NLT
“I have come to set the world on fire, and I wish it were already burning!”

ESV
“I came to cast fire on the earth, and would that it were already kindled!”

KJV
“I am come to send fire on the earth; and what will I, if it be already kindled?”

NKJV
“I came to send fire on the earth, and how I wish it were already kindled!” 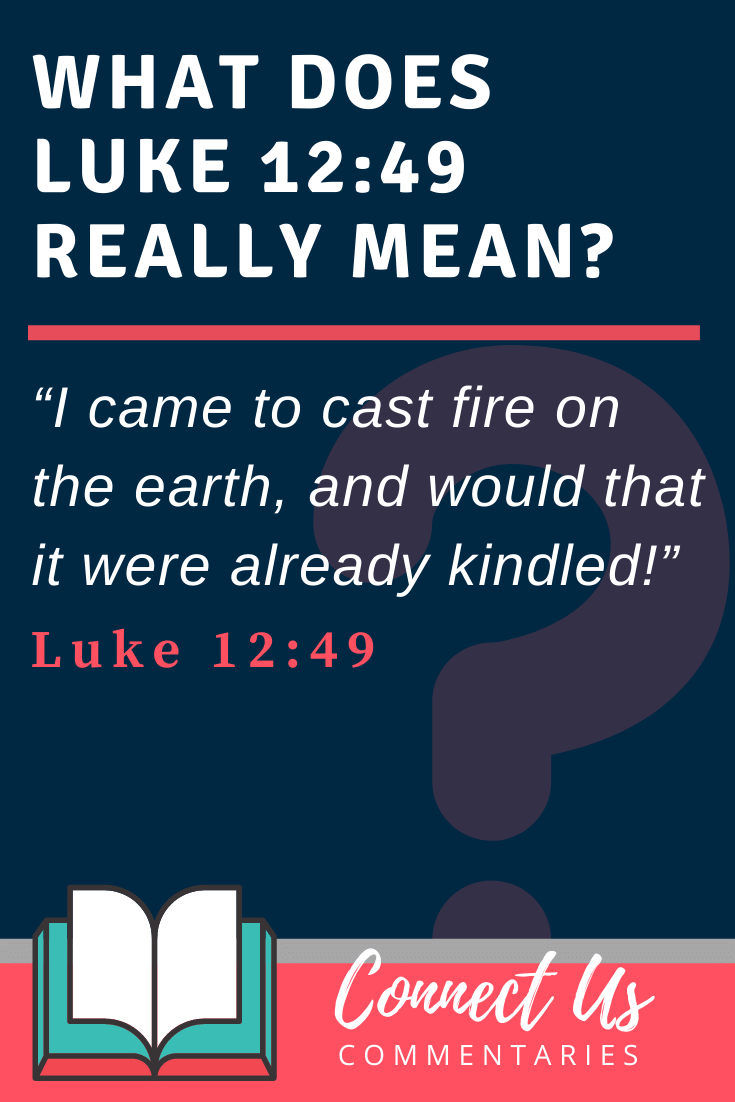