Luke 23:34
“Jesus said, ‘Father, forgive them, for they do not know what they are doing.’ And they divided up his clothes by casting lots.”

Explanation and Commentary of Luke 23:34

With perhaps the exception of “Let there be…”, this is the most absolutely powerful statement ever uttered or written. The whole of creation and humanity rises and falls on these words. This is the stumbling block to the Jews and folly to the Greeks (1 Cor 1:23). But this is also the essence of why Jesus came to earth, and why he lived a perfect life to take our sins upon his own body and pay the penalty we deserved. There is no one who does not stand in need of forgiveness. Ecclesiastes 7:20 says, “Indeed, there is no one on earth who is righteous, no one who does what is right and never sins.”

Understanding our condition, God, who could justifiably send another flood or some other catastrophe to purge the world of sin, instead sent his beloved Son to die for our sins, pronouncing forgiveness, interceding for us before he even sat down next to the Father. In the same way, we are called to forgive others who “do not know what they are doing.” If we find that forgiveness is difficult and painful, we can take heart that the ultimate forgiveness was more painful than we could ever endure.

Breaking Down the Key Parts of Luke 23:34

#1 “Jesus said, ‘Father, forgive them,’”
Unlike no other, Jesus practiced what he preached to the very end. He to said love and bless those who persecute us (Mt 5:44). He said we must forgive, infinitely, if we would be forgiven (Mt 6:14). He loved his enemies as completely as one could.

#2 “‘for they do not know what they are doing.’”
It is true that there was a sense that his oppressors did not know what they were doing. But it is also true that, in another sense, they very definitely did know. Pilate was warned by his wife that he was condemning an innocent man. The Jews knew that Jesus was powerful and would accomplish a revolution if they didn’t stop him. In that sense, they had to have known they were ignoring the plain truth in front of them for their own selfish envy. But this is the paradox in which we are held completely accountable for our choice to turn to God and the fact that unless God draws us and takes the blinders off our eyes and hearts, unless we are regenerate (Jn 3:3), we cannot see the kingdom of God.

#3 “And they divided up his clothes by casting lots.”
In fulfillment of the Psalm (Ps 22:18), the soldiers divided up Jesus’ clothes. This may be told to us for symbolic reasons as well since we are to put on clothes of Christ. When the soldiers, who “did not know what they were doing” took Jesus’ clothes to wear, perhaps they would also come to wear his forgiveness. Whatever happened with the soldiers, we are called to “put on Christ” (Gal 3:27).

NIV
Jesus said, “Father, forgive them, for they do not know what they are doing.” And they divided up his clothes by casting lots.

NLT
Jesus said, “Father, forgive them, for they don’t know what they are doing.” And the soldiers gambled for his clothes by throwing dice.

ESV
And Jesus said, “Father, forgive them, for they know not what they do.” And they cast lots to divide his garments.

KJV
Then said Jesus, “Father, forgive them; for they know not what they do.” And they parted his raiment, and cast lots.

NKJV
Then Jesus said, “Father, forgive them, for they do not know what they do.” And they divided His garments and cast lots. 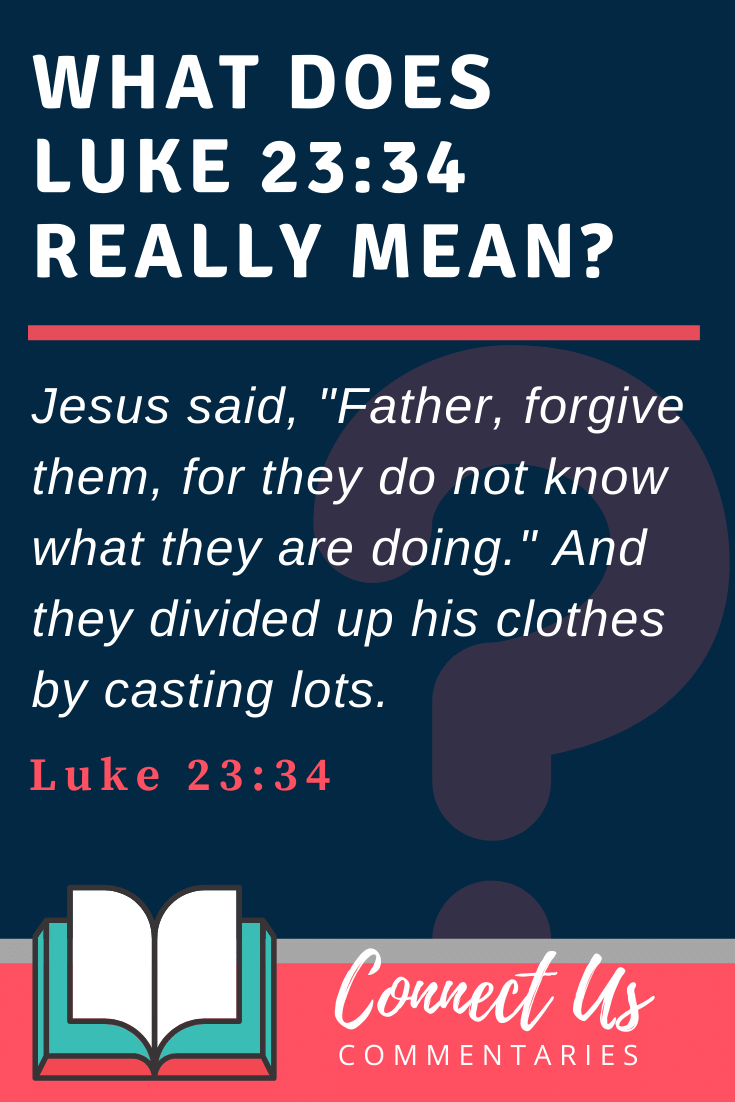