Mark 10:9
“Therefore what God has joined together, let no one separate.”

Explanation and Commentary of Mark 10:9

The very first human relationship established by God was a marriage presided over by God himself when he caused Adam to fall into a deep sleep and removed his rib. From this, he fashioned the woman and presented her to her husband who said, “‘This is now bone of my bones and flesh of my flesh; she shall be called ‘woman,’ for she was taken out of man.’ That is why a man leaves his father and mother and is united to his wife, and they become one flesh” (Gen 2:23-24).

On these grounds, Christ proclaimed that no one should separate a marriage union. The biblical conjugal view of marriage is that it is to endure until the death of one of the spouses. Many scholars agree that Christ made an exception for cases of adultery, but others interpret the Word to even exclude adultery as a proper reason to break the bond (Mal 2:16). The supporters of this view would say that the bond was already broken by the adulterer.

Nevertheless, the marriage bond should be the strongest of unions, and recent sociological innovations such as no-fault divorce and even birth control (itself not necessarily a bad thing) have led to a revisionist view that says rather than for the population of the world with godly offspring (Gen 1:28), and the illustration to the world of both the union of the Trinity and the mystery that is the relationship between Christ and his bride, the Church (Eph 5:32), marriage is for happiness. With this view, if a marriage ceases to cause happiness, then it should be forsaken. This has been a tragedy for humanity, an affront to God, and comes at a tremendous cost, especially to the children with which God has entrusted us.

Breaking Down the Key Parts of Mark 10:9

#1 “Therefore…”
The previous statement made by Christ is that any provision for divorce in the Law of Moses was given because of the hardness of the hearts of his people, but that God had joined man and woman together as one flesh, and as such, they are to leave their parents and cleave to one another. This is the grounds for the present statement.

#2 “…what God has joined together,”
The first couple was joined by God when Eve was presented to Adam and he took her as his wife. Traditionally, a marriage contract is written, followed by a ceremony of some kind, and the consummation finalizes the union, being the ultimate expression of conjugal oneness.

#3 “…let no one separate.”
If God cannot create an unbreakable bond, who can? One of the sins humanity will be judged for is the lack of seriousness toward this rule. In our sin, we are often foolish, especially when we are young. If only more married couples would take seriously the vows they took to God and one another, they would find that given time and the chance to mature and grow wise, God can make a happy marriage, especially when two committed Christians participate. Happiness is not the goal of Christian marriage, but it will usually be a bi-product of true faithfulness to God, truth, and one another.

NIV
“Therefore what God has joined together, let no one separate.”

NLT
“Let no one split apart what God has joined together.”

ESV
“What therefore God has joined together, let not man separate.”

NKJV
“Therefore what God has joined together, let not man separate.” 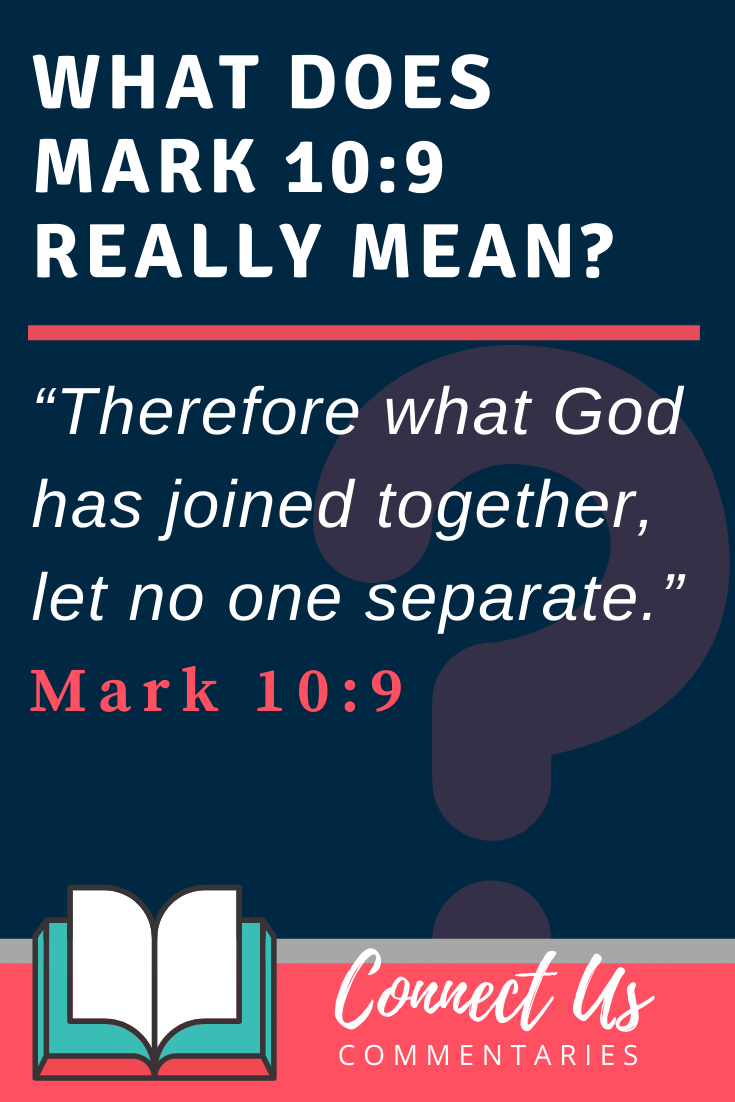