Matthew 24:15
“So when you see standing in the holy place ‘the abomination that causes desolation,’ spoken of through the prophet Daniel—let the reader understand—”

Explanation and Commentary of Matthew 24:15

Jesus is speaking of the end of the age, just before his return, for which we are still waiting. He has been detailing the destruction, devastation, and hardship that will be for all people as this final stage is enacted. Even believers will suffer, but those who remain to the end will be saved (Mt 24:13). The Church, especially for the last two hundred years has had a disagreement about the meaning of all these passages. Some believe that there will be a rapture of Christians before a seven-year tribulation. Others believe that there will not and that the Church will be purified by enduring the tribulation. Either way, the call is the same, always be ready, always be preaching the kingdom of God, and endure any trial that is upon us.

This particular verse speaks of a sign. Daniel had prophesied of such an abomination (Dan 9), and Christ would like the reader to understand that this had significance for his current subject. Many scholars have disagreed about the meaning of this verse. Some say it refers to the Roman standard “standing in the holy place,” others believe it refers to the desecration that occurred after the Zealot uprising and was a signal for the Christians to run for the hills.

But the fact that the exact meaning is unknown to us today should not detract from the main point of chapter 24. Jesus will return, and even he does not know when (Mt 24:36). Anyone who truly believes this will live a life of readiness. Think of how you would like to be found when Christ does return. You will want to be serving him, living for him, and growing in grace. If you believe that you are not well prepared for this, turn and begin to follow him with everything that you have. He will come again. If you are already passed away and with him in heaven, then you will return with him. If you are still here, faithfully enduring the trial of the end times, then he will call up in the air with him (1 Cor 15:51-54). Be ready.

Breaking Down the Key Parts of Matthew 24:15

#1 “So…”
Jesus has been detailing the tribulations to come.

#2 “…when you see standing in the holy place…”
The Holy Place could mean the holy place inside the Temple, or the holy of holies inside of that, or the Temple itself, or even the city of Jerusalem. Perhaps the imagery could even be extended to the spirits of the people of God.

#3 “‘the abomination that causes desolation,’ spoken of through the prophet Daniel—”
Daniel prophesied about this abomination in Daniel 9:27, 11:31, and 12:11. This is mysterious and interpretations vary. It seems to refer to something or some act that will desecrate a holy place.

#4 “let the reader understand—”
Some guess that Matthew has added this for his readers who would have known what he referred to by the current events at the time of the writing. However, this would be an unusual convention for the Gospels, so it is more probable that Jesus means to let the reader of Daniel understand the meaning.

NIV
“So when you see standing in the holy place ‘the abomination that causes desolation,’ spoken of through the prophet Daniel—let the reader understand.”

NLT
“The day is coming when you will see what Daniel the prophet spoke about—the ‘sacrilegious object that causes desecration’ standing in the Holy Place. (Reader, pay attention!)”

ESV
“So when you see the ‘abomination of desolation’ spoken of by the prophet Daniel, standing in the holy place (let the reader understand.)”

KJV
“When ye therefore shall see the ‘abomination of desolation’, spoken of by Daniel the prophet, stand in the holy place, (whoso readeth, let him understand.)”

NKJV
“Therefore when you see the ‘abomination of desolation,’ spoken of by Daniel the prophet, standing in the holy place (whoever reads, let him understand.)” 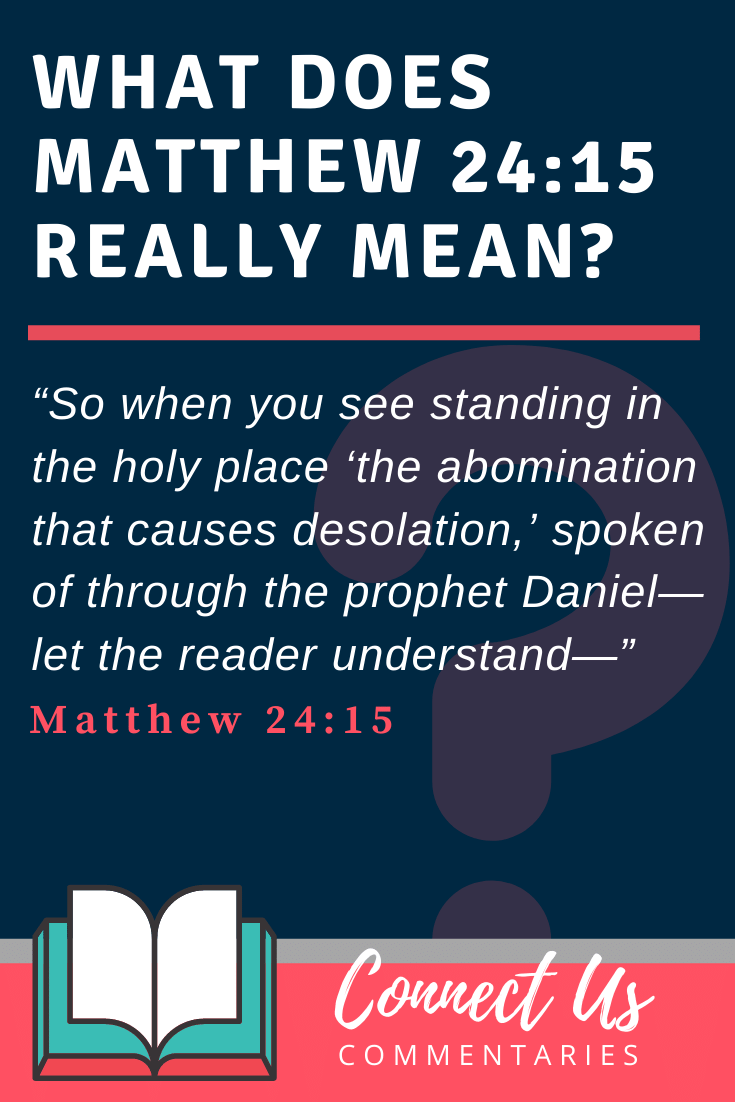