Explanation and Commentary of Matthew 5:17

There are those who believe that by this Jesus is saying that he intends for Christians to virtually become like Jews in their practice of the Law. But the majority of orthodox Christian scholars, including the Apostle Paul, don’t believe that was his meaning. Rather, Jesus appears to be saying that he intends for Christians to follow the ways of God, the moral commandments, while he himself is the fulfillment of the ceremonial Law. We are to continue to obey God’s commands to not steal, kill, bear false witness, Love God with all our heart, and commands such as these. But because of Jesus, we no longer make animal sacrifices, practice ritual cleansing, or any other of the ceremonial laws.

The “Law or the Prophets” tends to be a way of naming the Old Testament. Jesus opened the Law and the Prophets to show the men on the road to Emmaus where it told about him and his death and resurrection. Christians should read the Old Testament as being about Christ. In Genesis, he is the offspring that will bruise satan’s head (Gen 3:15). In the story of Abraham, he is the torch of Abraham’s blood covenant with God (Gen 15:9-21). He is the ark of Noah, the Passover Lamb, the scapegoat of the Atonement, and the one promised by the prophets.

The plain meaning here is that Jesus means for us to follow God’s ways. We are to seek his kingdom and his righteousness. We must love God with all our hearts, soul, and strength, and love our neighbor as ourselves, walk humbly, justly, and in purity.

Breaking Down the Key Parts of Matthew 5:17

#1 “Do not think that I have come to abolish the Law…”
Because of his ministry and lifestyle, Jesus was accused of trying to abolish the Law. He healed on the Sabbath, he allowed his disciples to pluck grain as they walked through the fields on the Sabbath, and he accepted and healed the lepers. But his message was not that Jews should not keep the Law, although Paul would claim after Jesus’ resurrection that the ceremonial law was fulfilled in Christ and that it no longer needed to be kept. The Law is also a way to refer to the first five books of the Bible, which contains Mosaic Law.

#2 “…or the Prophets;”
This nomenclature refers to most of the history books of Scripture and includes the books written by the Prophets (Isaiah through Malachi).

#3 “I have not come to abolish them, but to fulfill them.”
Jesus came to fulfill the Law by being the culmination of all that was said about him or typified him. He also was the ultimate expression of the ceremonial law, such that we no longer must keep it. Rather, we must repent of our sins and put our faith in Christ who has dies for us, and whoever believes will be saved (Jn 3:16).

NLT
“Don’t misunderstand why I have come. I did not come to abolish the law of Moses or the writings of the prophets. No, I came to accomplish their purpose.”

NKJV
“Do not think that I came to destroy the Law or the Prophets. I did not come to destroy but to fulfill.” 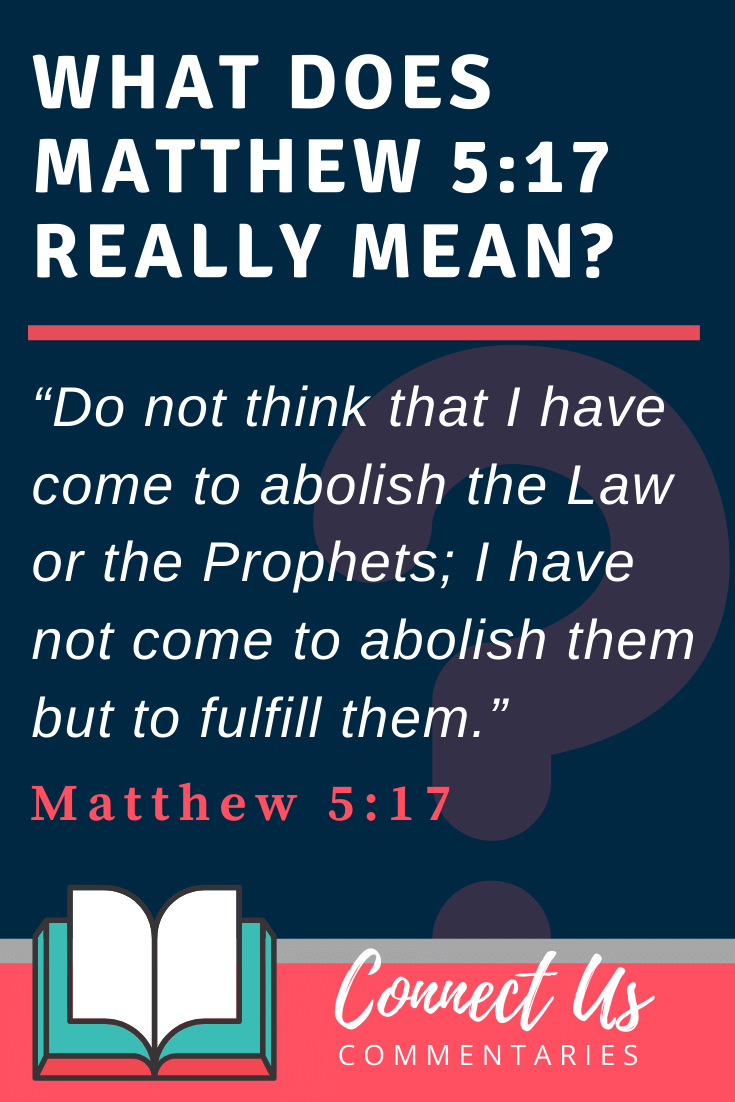