Matthew 5:32
“But I tell you that anyone who divorces his wife, except for sexual immorality, makes her the victim of adultery, and anyone who marries a divorced woman commits adultery.”

Explanation and Commentary of Matthew 5:32

Jesus Christ, a single man, was a reformer in every way, including in the area of marriage. In his day there was a despicable practice of discarding one’s wife for any reason, so long as a proper certificate of divorce was given. While Moses had instituted this law in part for the protection of the jilted wife, Jesus pointed out that, “Moses permitted you to divorce your wives because your hearts were hard. But it was not this way from the beginning” (Mt 19:8).

In our day again there is a need for reform, even in the Church. Scholars debate the clause here about “sexual immorality.” Is it adultery? Is it only applied during the betrothal? It is a difficult topic, but the majority of evangelical scholarship would give an exception to marital permanence for adultery. A spouse cannot be “the victim of adultery” if they already committed it.

That said, our century has undergone a redefinition of marriage. What once meant the union under God of a man and woman for the sake of bearing his image together, raising godly offspring (Gen 1:26-28), and displaying a sign of the relationship between Jesus Christ and his bride, the Church (Eph 5:32), now has become a union for the sake of making the couple happy. This redefinition opens the door for a multitude of sins. First, if marriage is for happiness, rather than glorifying God and having a family, then the grounds for divorce are some level of unhappiness. This comes from our no-fault divorce laws. Other redefinitions of marriage also spring forth; gay marriage, polygamy, and any other manner of union for the sake of “happiness.” If you are divorced and remarried (to a member of the opposite sex), then no matter what the circumstances, this marriage is now a priority to God and should be maintained until death. If a Christian marriage is built on commitment, then God can overcome any obstacles.

Breaking Down the Key Parts of Matthew 5:32

#1 “But…”
Jesus’ prior words were, “It has been said, ‘Anyone who divorces his wife must give her a certificate of divorce.’”

#2 “…I tell you that anyone who divorces his wife,”
The divorce would have been initiated by the husband. The wife had no right whatsoever in the matter.

#3 “except for sexual immorality,”
The exact meaning here has puzzled scholars. If Jesus meant adultery, he might have said so. Herein lies the debate.

#4 “makes her the victim of adultery,”
The language here is actually “makes her commit adultery.” But it seems the NIV has the right understanding, though not the right wording.

#5 “and anyone who marries a divorced woman commits adultery.”
The reason is that she is still married to another in the eyes of God.

NIV
“But I tell you that anyone who divorces his wife, except for sexual immorality, makes her the victim of adultery, and anyone who marries a divorced woman commits adultery.”

NLT
“But I say that a man who divorces his wife, unless she has been unfaithful, causes her to commit adultery. And anyone who marries a divorced woman also commits adultery.”

ESV
“But I say to you that everyone who divorces his wife, except on the ground of sexual immorality, makes her commit adultery, and whoever marries a divorced woman commits adultery.”

KJV
“But I say unto you, That whosoever shall put away his wife, saving for the cause of fornication, causeth her to commit adultery: and whosoever shall marry her that is divorced committeth adultery.”

NKJV
“But I say to you that whoever divorces his wife for any reason except sexual immorality causes her to commit adultery; and whoever marries a woman who is divorced commits adultery.” 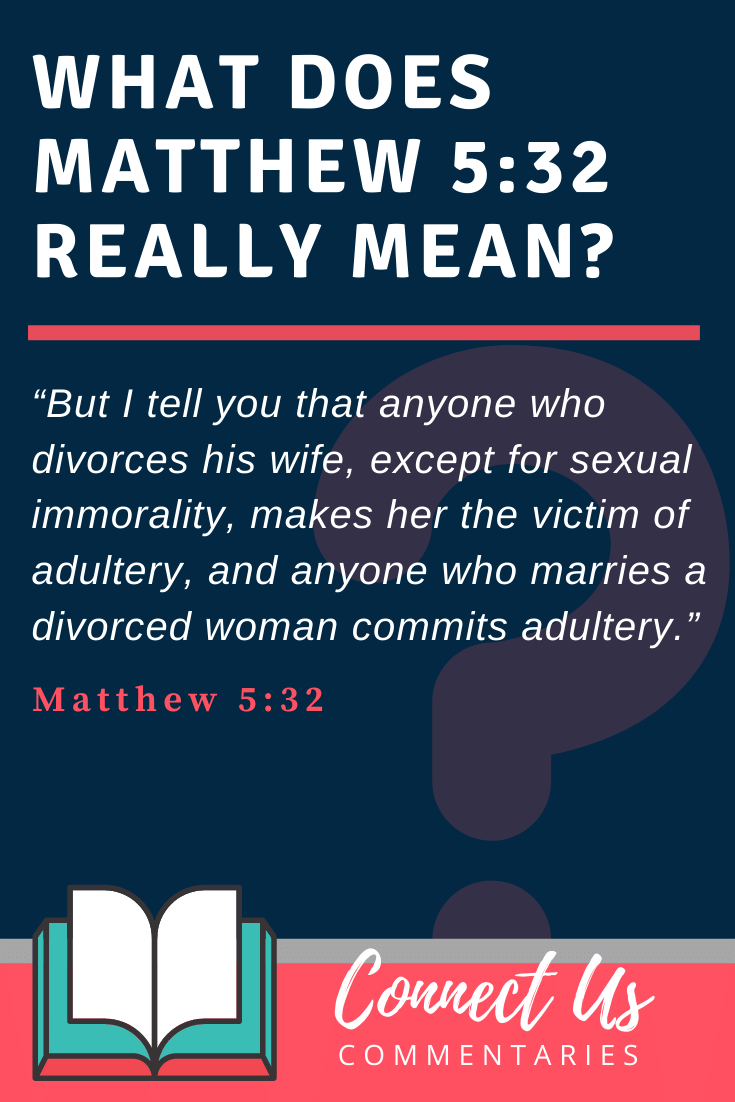