Matthew 5:39
“But I tell you, do not resist an evil person. If anyone slaps you on the right cheek, turn to them the other also.”

Explanation and Commentary of Matthew 5:39

This was the sort of statement that all but the hearers with spiritual ears could only count as foolishness. What could possibly be gained by behaving in the manner that Jesus advocated? Would this man who was saying these things ever act this way? Of course, he did when he allowed them to hang him on a Roman cross, and said, “Father forgive them, they know not what they do.

Jesus is challenging the conventional justice that says: “eye for an eye, and tooth for a tooth” (Mt 5:38). Christ calls to play by a different set of rules, but why? Is his intention to say that God does not care about justice? It may at first appear that way, but in actuality, this proves that God is more just than we can even understand. God cares deeply about justice, but he wants to set his people free of the responsibility of being the judge, justifier, and executioner. If anyone is qualified to be those things, it is only God and those who have his vested authority as agents of God, like the state (Ro 13:1-7).

For the Christian, we are called to act like Jesus in the face of an enemy or an oppressor. To turn the other cheek is to exhibit the most extreme self-control over one’s anger, a great blessing, and to leave vengeance to the Lord. There is something enormously powerful about a person who is strong enough and courageous enough to strike back in one’s own defense, but who chooses not to do so. Every time this happens, and it is a rarity, it is a glorious display of the Gospel in a believer. It should be noted that what Jesus is talking about is not cowardice. Some would fear to retaliate and call it Christlike. But Jesus is not speaking of that.

Breaking Down the Key Parts of Matthew 5:39

#1 “But I tell you,”
Jesus has been using the construction, “You have heard…but I say.” This is an effective rhetorical device that he makes much use of.

#2 “do not resist an evil person.”
How must one trust in God in order to obey this command? But if God is our defender, we are privileged to bless our enemies, knowing that God is just. Another possible purpose for Christ’s command is the sure path to humility that this road would is.

#3 “If anyone slaps you on the right cheek, turn to him the other also.”
This would be a great victory over the one who slaps, showing that their violence failed to accomplish what it was intended to. It shows the aggressor that one cannot be cowed or controlled. The one who is hit and turns the other cheek wins in the economy of the kingdom of God. And that same one is an imitator of his or her Lord, who “for the joy set before him,” endured the cross (Heb 12:2).

NIV
“But I tell you, do not resist an evil person. If anyone slaps you on the right cheek, turn to them the other cheek also.”

NLT
“But I say, do not resist an evil person! If someone slaps you on the right cheek, offer the other cheek also.”

ESV
“But I say to you, Do not resist the one who is evil. But if anyone slaps you on the right cheek, turn to him the other also.”

KJV
“But I say unto you, That ye resist not evil: but whosoever shall smite thee on thy right cheek, turn to him the other also.”

NKJV
“But I tell you not to resist an evil person. But whoever slaps you on your right cheek, turn the other to him also.” 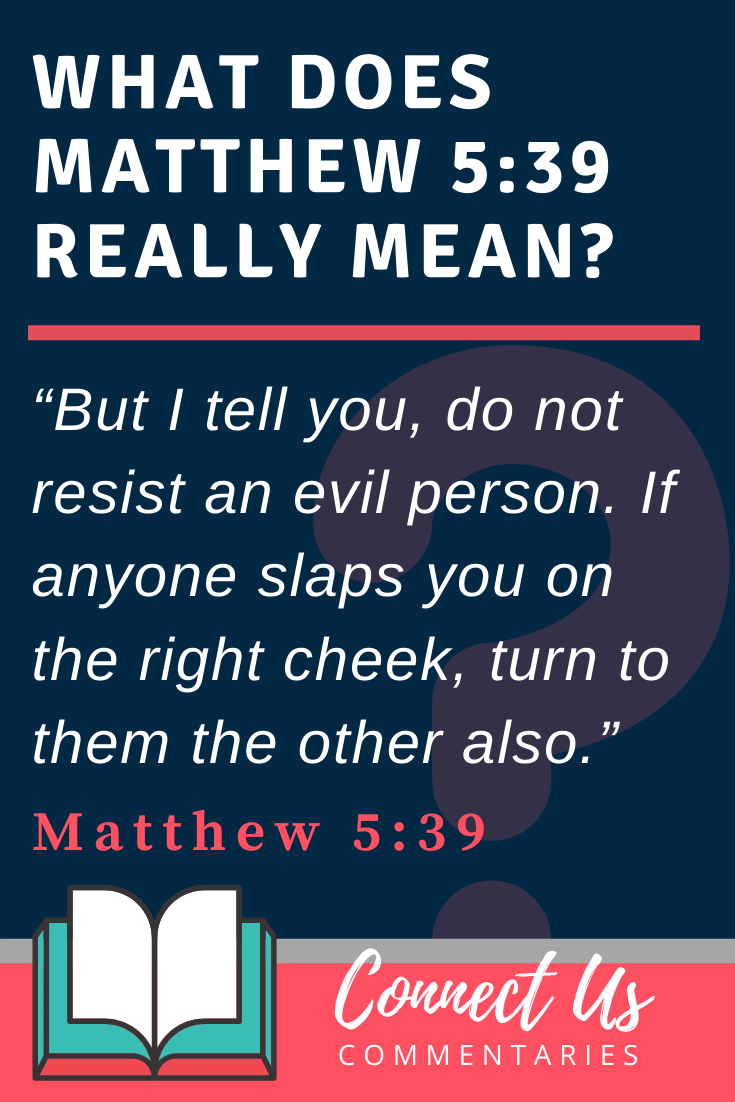