Proverbs 11:14
“For lack of guidance a nation falls, but victory is won through many advisers.”

Explanation and Commentary of Proverbs 11:14

Consider a stubborn king who will not listen to advice, such as the son of Solomon, who was advised wisely by his father’s counselors, but ignored it (1 Kg 12:8). Running a nation is a complex job, and any smart ruler will gather the best and brightest to help them. Abraham Lincoln comes to mind, having elicited his chief presidential rivals as his cabinet. His humility and greatness of soul won most of them over, and they helped him achieve the impossible.

For those of us who are not rulers of nations, this proverb still applies, because what goes for a complex problem like the administration of a state, goes for the more common problems that we all face. The point is identity and humility. To ask for help requires one to know who he or she is and to have a firm identity rooted in the image of God and the salvation from Christ alone. In this person, there is no insecurity or arrogance, but rather a strength and confidence that is bolstered by humility. When one is free in this way, one can feel free to ask for help when needed. It takes humility to recognize when someone might know more than you and to seek a truly unbiased opinion from someone who thinks for themselves and is not just your yes man.

On-the-other hand, if you are not able to make a decision at some point, holding it as your own and taking responsibility for what happens, you could get trapped in indecision. At some point, after prayerful deliberation and counsel, a decision has to be made and followed through.

Breaking Down the Key Parts of Proverbs 11:14

#1 “For lack of guidance…”
This refers to a person, specifically a ruler of a nation, who will not seek or take advice.

#2 “…a nation falls,”
The fall of a nation could be due to financial collapse, or more commonly has been due to conquest.

#3 “but victory is won through many advisors.”
No matter what the challenge, seeking the wisest independent thinkers for advice in any matter is always smart, depending on your willingness to listen, consider, pray, and think for yourself.

NIV
For lack of guidance a nation falls, but victory is won through many advisers.

NLT
Without wise leadership, a nation falls; there is safety in having many advisers.

ESV
Where there is no guidance, a people falls, but in an abundance of counselors there is safety.

KJV
Where no counsel is, the people fall: but in the multitude of counsellors there is safety.

NKJV
Where there is no counsel, the people fall; But in the multitude of counselors there is safety. 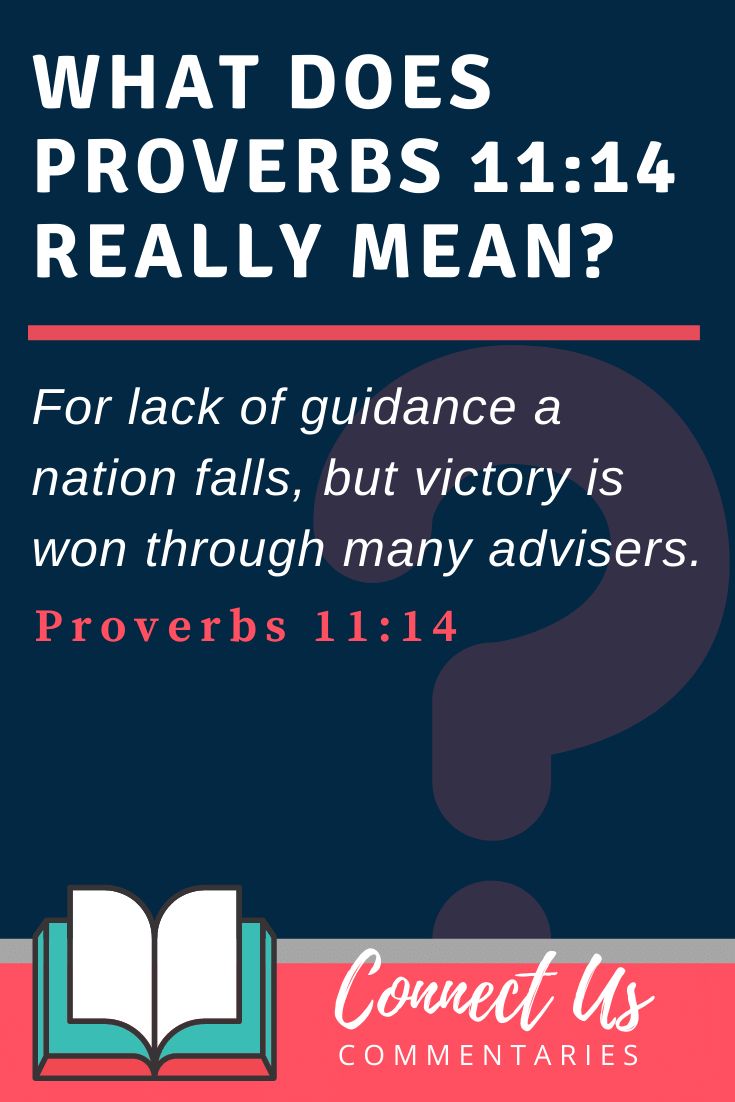