Proverbs 13:22
“A good person leaves an inheritance for their children’s children, but a sinner’s wealth is stored up for the righteous.”

Explanation and Commentary of Proverbs 13:22

There is a general principle in the Bible, especially in the Old Testament, and especially in the Book of Proverbs that righteous living in the fear of the Lord will lead to blessings in this life. Part of that blessing is wealth and provision. For the Christian, it can be tricky to ponder this because the New Testament reality is that God could call us to a lifestyle that does not include an abundance of financial prosperity.

That said, the principles of Biblical ethics and morality still do generally apply. It is still true that if you are foolish with your money you will not have any, but if you are a good steward, managing the impulses to overspend, seeking the kingdom of God, rather than earthly luxury, it is likely that you will have money left over to pass on to your children. In this particular Proverb, “the sinner’s wealth is laid up for the righteous.” This speaks to the providential hand of God in divesting the “sinner,” the ungodly or unrighteous person of his or her wealth, and reallocating it to those who fear God.

For the Christian, we should take seriously the idea of financial stewardship and not live in such a way as to spend every penny that comes our way, so that we can pass some on. Leaving a legacy includes more than money, and should also include examples of character and faith that is passed on as well. If this is something you have neglected, it is never too late to start.

Breaking Down the Key Parts of Proverbs 13:22

#1 “A good person…”
No one is good from the perspective of the fall and the inherited sinfulness of Adam (Mk 10:18), but in the current sense, this means a God-fearing person.

#2 “…leaves an inheritance for their children’s children,”
What is mostly in view here is the financial and material resources left over from a life of underspending as a general rule, and of honoring God, who has protected and blessed the man. This could also include the inheritance of faith, character, and other such legacies.

#3 “…but a sinner’s wealth…”
The Psalmists sometimes cry out to God for answers to the question, “Why do the wicked prosper?” The fact is that for a time, the unrighteous may produce wealth, often by wicked means.

#4 “…is stored up for the righteous.”
Similarly to the way that God allowed the Canaanites to prosper so that he could transfer their wealth to the Jews, the wealth of the wicked is laid up for the righteous, even if, mysteriously, the reckoning for that does not take place until the afterlife.

NIV
A good person leaves an inheritance for their children’s children, but a sinner’s wealth is stored up for the righteous.

NLT
Good people leave an inheritance to their grandchildren, but the sinner’s wealth passes to the godly.

ESV
A good man leaves an inheritance to his children’s children, but the sinner’s wealth is laid up for the righteous.

KJV
A good man leaveth an inheritance to his children’s children: and the wealth of the sinner is laid up for the just.

NKJV
A good man leaves an inheritance to his children’s children, But the wealth of the sinner is stored up for the righteous. 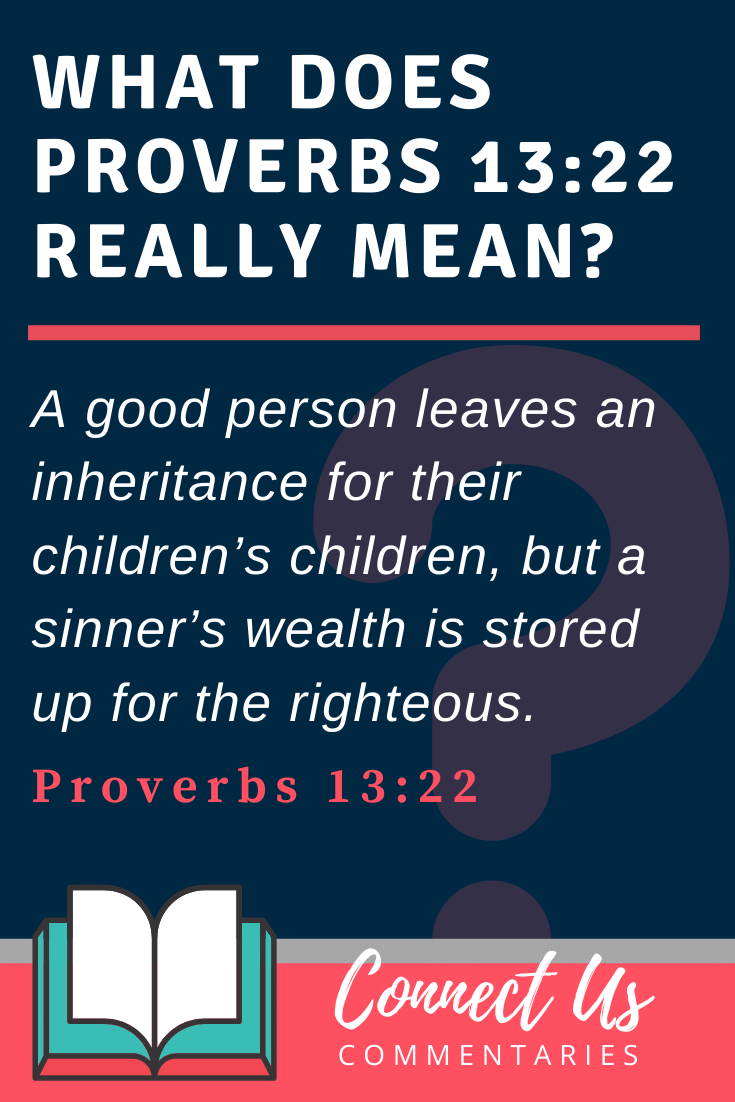