Proverbs 16:18
“Pride goes before destruction, a haughty spirit before a fall.”

Explanation and Commentary on Proverbs 16:18

This is one of the key principles that run throughout the arc of Scripture. Jesus himself taught the point often as he saw in his own day the religious pride of the Pharisees and Jewish elite (Lk 14:11). He pointed it out in his disciples every chance he got (Lk 9:46-48).

Paul chastised the Corinthians for taking pride in the people they were associated with, asking them, “What do you have that you did not receive. And if you received it, why do you boast as though you did not” (1 Cor 4:7)? Jesus told his followers and all who would listen that they should always take the lowest place. It is better to be asked to move up toward the head of the table than to be told to move down because someone more important had arrived (Lk 14:10).

The only remedy for pride is humility, which is impossible to attain by focusing on it. Instead, fix your eyes on God, who is truly marvelous, and you will see yourself rightly. Leave thinking about yourself to others and to God.

Breaking Down the Key Parts of Proverbs 16:18

#1 “Pride…”
It is hard to calculate all the evil that has been caused by the destructive tendency that humans have toward pridefulness. Even in the heavenly realms, it was pride that caused Satan, once the most beautiful and exalted angel of light, to covet the greatness of God and the worship he received. Satan rebelled because of his pride. Pride is the main reason why people do not believe in and worship God. The temptation to be one’s own God and worship one’s self as an idol is very great to the fallen human race.

This warning could not be any clearer. A sure path to destruction is exalting oneself in pride. Countless stories are told today about men and women who thought too highly of themselves and began to consider themselves above laws and norms until everything finally came crashing down around them. Pride is so deceptive because it promises the world, but does not deliver.

#3 “a haughty spirit before a fall.”
A haughty spirit can be seen in the rich and powerful, but it can also appear in the poor and lowly. This can sometimes go unrecognized because of the low status, but it will be seen in the bitter resentment as the person of low station will seethe at the misfortune and injustice that has led him or her to this low position. It is the certainty that they should be elevated that comes from pride.

NIV
Pride goes before destruction, a haughty spirit before a fall.

NLT
Pride goes before destruction, and haughtiness before a fall.

ESV
Pride goes before destruction, and a haughty spirit before a fall.

KJV
Pride goeth before destruction, and an haughty spirit before a fall.

NKJV
Pride goes before destruction, And a haughty spirit before a fall. 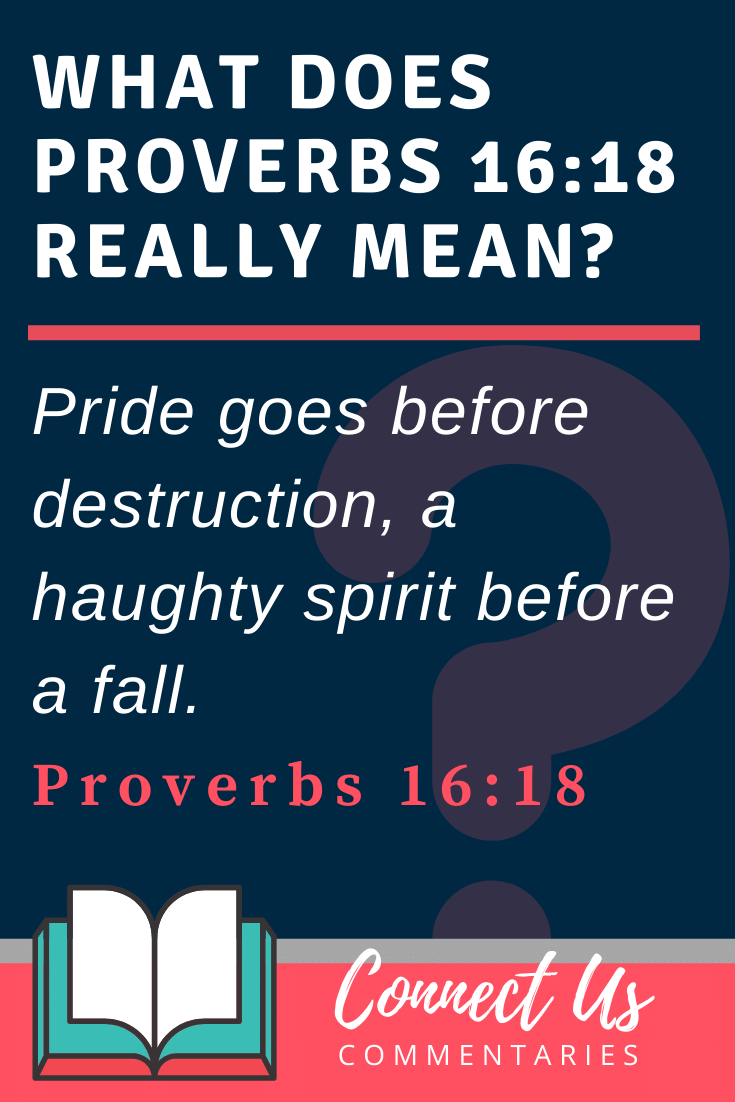