Revelation 19:16
“On his robe and on his thigh he has this name written: KING OF KINGS AND LORD OF LORDS.”

Explanation and Commentary of Revelation 19:16

It can be tempting to look a certain way at the incarnational Christ of the gospels, remembering the Sunday school pictures of gentle Jesus with the children and the lamb on his shoulders, and forget that he is King of Kings and Lord of Lords.

The exalted Christ who is on his throne in heaven and will return on a white horse (Rev 19:11), with his powerful angels in blazing glory (2 Thes 1:7), and with a two-edged sword to do away with all forms of evil at the end of the Age, before judging the living and the dead, often gets forgotten. But we have a Savior who is powerful and able to do all that he promises. We know from the incarnational Christ that he is willing to help us and to save us, but the exalted King of Kings also has the ability to do what he is willing to do.

Breaking Down the Key Parts of Revelation 19:16

#1 “On his robe…”
This is the white robe that is dipped in blood (Rev 19:13). The blood is either the blood of the Lamb himself or the blood of the nations being judged (Isa 63:1-6). Both are possible according to biblical imagery. Perhaps it is both.

#2 “and on his thigh he has his name written:”
It is not likely that Jesus would break Levitical law to get a tattoo on his thigh (Lev 19:28). This is either symbolic, or the name on the robe or a sash covers his thigh.

#3 “KING OF KINGS AND LORD OF LORDS.”
There is no true king on earth who does not have his power vested in him by God. The authority of any state government is an extension of God’s rule. This is why Christians are instructed to obey the laws of the land (Ro 13), and to give to Caesar what is Caesar’s (Mk 12:17). Even if an earthly king does not recognize his authority in God alone, it is still true (Dan 4:29-30).

NIV
On his robe and on his thigh he has this name written: KING OF KINGS AND LORD OF LORDS.

NLT
On his robe at his thigh was written this title: King of all kings and Lord of all lords.

ESV
On his robe and on his thigh he has a name written, King of kings and Lord of lords.

KJV
And he hath on his vesture and on his thigh a name written, KING OF KINGS AND LORD OF LORDS.

NKJV
And He has on His robe and on His thigh a name written: KING OF KINGS AND LORD OF LORDS. 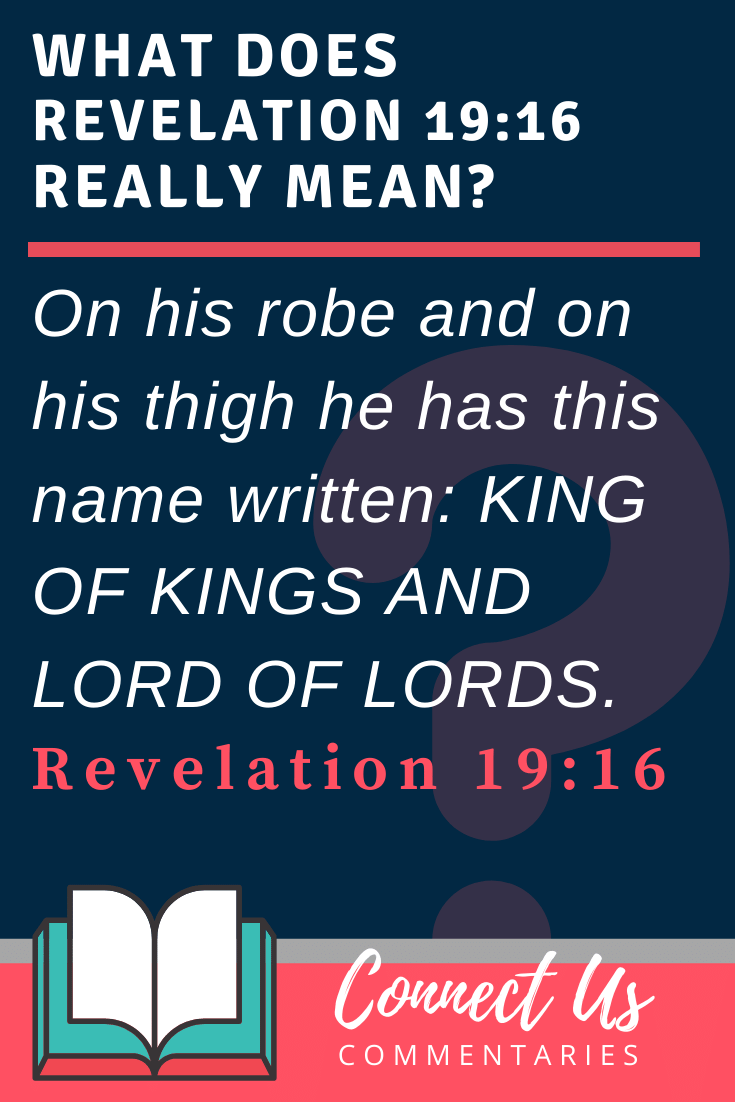