Romans 1:16
“For I am not ashamed of the gospel, because it is the power of God that brings salvation to everyone who believes: first to the Jew, then to the Gentile.”

Explanation and Commentary of Romans 1:16

Paul is eager to preach the Gospel to the Romans, as he preached to others. The righteousness of God is revealed in the Gospel of Jesus Christ. The forgiveness of sins and life by faith comes by belief in this powerful message.

Paul will go on to say that the wrath of God is being revealed against ungodliness and unrighteousness by those who suppress the truth (Ro 1:18). Salvation from the wrath of God does not come by the law, which was a nanny for God’s people until God manifested true righteousness in the life, death, and resurrection of Jesus Christ, who took on the curse of sin, though he never sinned. He has taken our sin into his body and paid the penalty. Anyone who believes in him will not die but will have everlasting life, having been forgiven and reconciled to God.

To genuinely believe in Christ’s death on the cross for sins will cause someone to repent of their sins, no longer able to “suppress the truth.” True faith will cause an honest look at one’s own tendency to “fall short of the glory of God” (Ro 3:23) and one’s own desperate need of a Savior. Faith comes by hearing (Ro 10:17) and hearing comes from preaching the powerful Gospel of Jesus Christ.

Breaking Down the Key Parts of Romans 1:16

#1 “For…”
Paul is explaining why he is eager to come and preach the Gospel message.

#2 “…I am not ashamed of the gospel,”
The Gospel was foolishness to the Greeks and a stumbling block to the Gentiles. Others looked down on those who had put their hope in a murdered Savior. Paul told the Corinthian church in 1 Cor 2:2; 4-5, that “I resolved to know nothing while I was with you except Jesus Christ and him crucified,” and that, “My message and my preaching were not with wise and persuasive words, but with a demonstration of the Spirit’s power so that your faith might not rest on human wisdom, but on God’s power.”

#3 “because it is the power of God that brings salvation to everyone who believes:”
“Let the one who boasts boast in the Lord” (1 Cor 1:31). Paul’s converts would not be able to boast in Paul, or even in themselves, but in God’s power. There is no believer in the Kingdom of Heaven who is not saved by grace, through the power of God through faith, by the hearing of the Gospel of Jesus Christ, crucified for sinners.

#4 “first to the Jew, then to the Gentile.”
Jesus was the prophesied Jewish Messiah. He himself was a Jew. It was right that the Gospel was preached to the original vicarious nation. Paul would describe later (Ro 11) how the Jews had undergone a temporary hardening of heart so that the Gospel could be preached to the Gentiles and they could be grafted in. The salvation of the whole world through Abraham’s seed was always the plan (Gen 12:2-3).

NIV
For I am not ashamed of the gospel, because it is the power of God that brings salvation to everyone who believes: first to the Jew, then to the Gentile.

NLT
For I am not ashamed of this Good News about Christ. It is the power of God at work, saving everyone who believes—the Jew first and also the Gentile.

ESV
For I am not ashamed of the gospel, for it is the power of God for salvation to everyone who believes, to the Jew first and also to the Greek.

KJV
For I am not ashamed of the gospel of Christ: for it is the power of God unto salvation to every one that believeth; to the Jew first, and also to the Greek.

NKJV
For I am not ashamed of the gospel of Christ, for it is the power of God to salvation for everyone who believes, for the Jew first and also for the Greek. 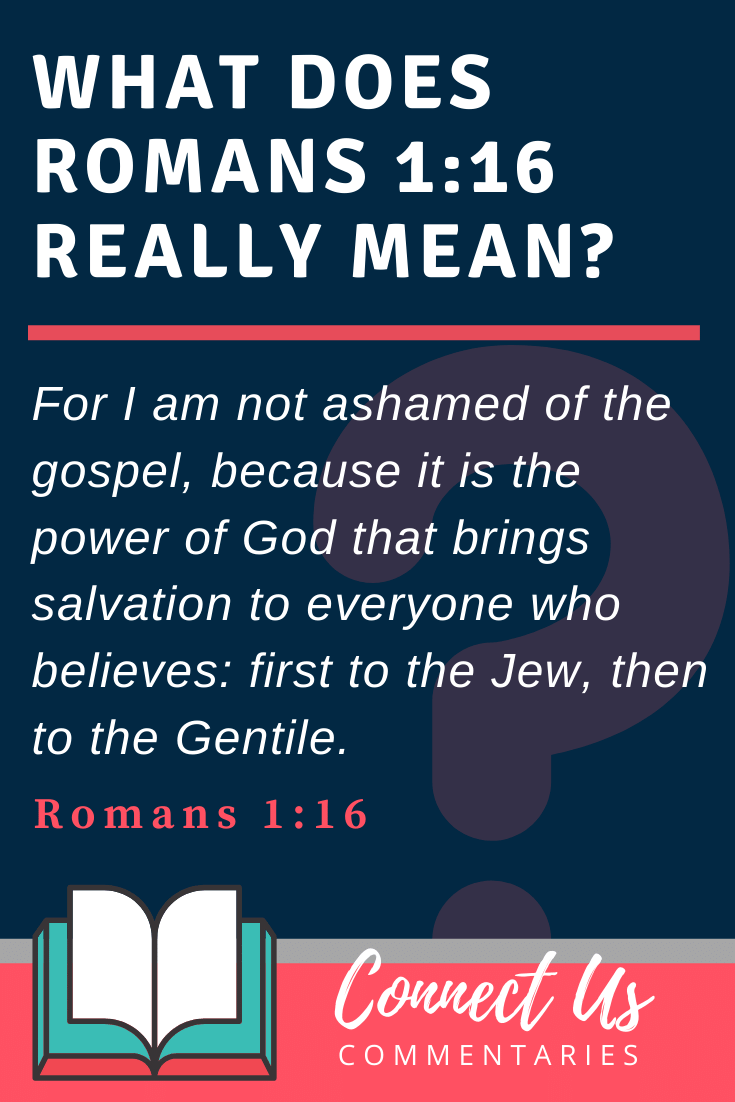