Romans 1:20
“For since the creation of the world God’s invisible qualities—his eternal power and divine nature—have been clearly seen, being understood from what has been made, so that people are without excuse.”

Explanation and Commentary on Romans 1:20

One of the great biblical paradoxes to be grasped by the faithful is that we are created in the image of God (Gen 1:26-28) and given the capacity to reason and make decisions as delegated stewards of God’s good creation, but that we are also fallen into sin and corruption, and unable to choose God without his gracious hand drawing us to him (Jn 6:44).

But we must never let the doctrines of grace and God’s right to predestine abolish our responsibility for our choices. Criminals are punished for their crimes because not to punish them would be to rob them of the dignity inherent in all image-bearers of God, no matter how far we have fallen. Humans have intrinsic value, and the moment we are not held accountable for our choices, we cease to be human. It is a hateful act to assume someone just “can’t help it” as though they were an animal.

Because of this, even those who have not heard of Jesus have everything they need in the very fact of their existence, and the attributes of the creation, to be able to see there is a God who is good and moral who we must obey and worship.

Breaking Down the Key Parts of Romans 1:20

#1 “For since the creation of the world…”
God the Father, the Son, and the Holy Spirit are eternal, but it was not until the world was created that he could be clearly perceived because it was in the “good” things made that God’s nature was reflected. Further, until God created man, there was no man to “clearly see” God.

#2 “…God’s invisible qualities—his eternal power and divine nature—have been clearly seen,”
Jesus Christ would come and reveal the full character and nature of the Father (Jn 14:8). He took a dim picture and brought it into focus by his life and his own qualities on display. But even before Christ was revealed, even before God revealed himself to Abram (Gen 12) his eternal power and divine nature were clear enough. Abraham could recognize God when he called because he had already known about him internally.

#3 “being understood from what has been made,”
How does one see invisible qualities, especially “eternal power and divine nature”? Look around and see if your spirit does not confirm the truth. Look at the way things work in the creation of the earth, let alone heaven. To stop and consider that we exist and to ponder, even as children do, that there simply must have been a Creator, will prove it in our hearts. To have created all of this and to continue sustaining it, there must be a God, and he must be divine in his nature.

#4 “so that people are without excuse.”
We are called to preach the name of Jesus for salvation, but Paul’s point is that men and women will be held accountable to reverence God even before they have heard the name.

NIV
For since the creation of the world God’s invisible qualities—his eternal power and divine nature—have been clearly seen, being understood from what has been made, so that people are without excuse.

NLT
For ever since the world was created, people have seen the earth and sky. Through everything God made, they can clearly see his invisible qualities—his eternal power and divine nature. So they have no excuse for not knowing God.

ESV
For his invisible attributes, namely, his eternal power and divine nature, have been clearly perceived, ever since the creation of the world, in the things that have been made. So they are without excuse.

KJV
For the invisible things of him from the creation of the world are clearly seen, being understood by the things that are made, even his eternal power and Godhead; so that they are without excuse.

NKJV
For since the creation of the world His invisible attributes are clearly seen, being understood by the things that are made, even His eternal power and Godhead, so that they are without excuse. 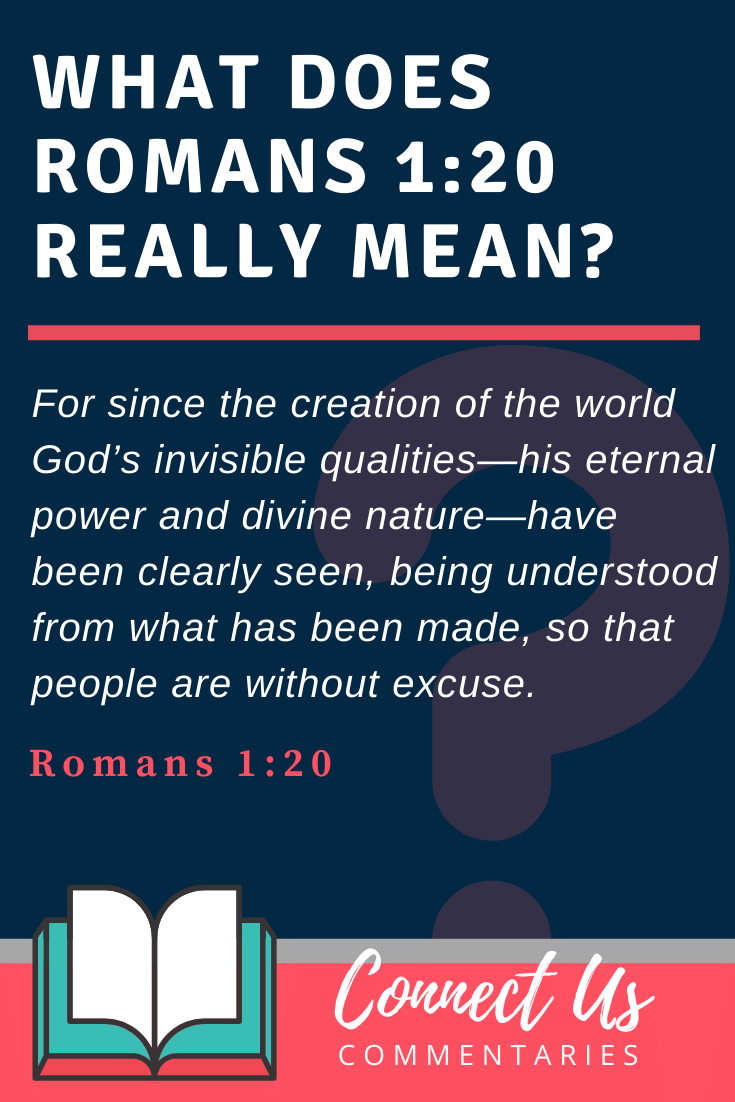