Romans 1:26
“Because of this, God gave them over to shameful lusts. Even their women exchanged natural sexual relations for unnatural ones.”

Explanation and Commentary of Romans 1:26

Paul begins Romans with a state of the world address before laying out the solution to the problem of sin. In this particular verse, he is showing the relationship of idol worship (Ro 1:21-23) and sinful behavior. The wrath of God is coming because after worshipping creatures rather than the Creator, people were “given over” by the Creator to their own wills and their own lusts and passions. The wrath of God is not, contrary to what some think, something bad happening to a sinner. Rather, the wrath of God is for nothing to happen, for God to allow us to go on as we are, sinning with no immediate consequences.

Paul’s example in verse 26 seems to be the homosexuality of women. Only the blindest and most unfaithful rendering of clear Scripture in the Old and New Testaments (Lev 18:22) could leave room for the idea that there are some cases where God would allow a redefinition of marriage or sexual union. But this section alone shows clearly enough that it is out of idolatry and “a depraved mind” (Ro 1:28) that one could hold to such a mistake. What God has designed is perfect, and it is only in our sinfulness that we would pervert it.

This is not to say that we should be hateful towards people who practice homosexuality, but neither should we condone it. It is hateful to condone what God has condemned. But anyone who struggles with sin of any kind should be treated with compassion and lovingly and patiently instructed in the truth.

Breaking Down the Key Parts of Romans 1:26

#1 “Because of this,”
Because they “exchanged the glory of the immortal God for images made to look like a mortal human being and birds and animals and reptiles.” In other words, they worshiped idols instead of God.

#2 “God gave them over to shameful lusts.”
The wrath of God is to “give…over” until the day of judgment. His mercy would be a calamity that would cause a person to consider their way of life and repent. He has given us free will, and for the most part, does not intervene when we are hell-bent on sin.

#3 “Even their women…”
He implies here what he will say explicitly elsewhere, that the men are also practicing homosexuality.

#4 “…exchanged natural sexual relations for unnatural ones.”
In this context, “natural” means the way God made it. In other contexts, it might mean something that is according to the sinful world; natural man vs. supernatural (1 Cor 2:14). These women exchanged sexuality as God created it for something unnatural, according to fleshly desire.

NIV
Because of this, God gave them over to shameful lusts. Even their women exchanged natural sexual relations for unnatural ones.

NLT
That is why God abandoned them to their shameful desires. Even the women turned against the natural way to have sex and instead indulged in sex with each other.

ESV
For this reason God gave them up to dishonorable passions. For their women exchanged natural relations for those that are contrary to nature.

KJV
For this cause God gave them up unto vile affections: for even their women did change the natural use into that which is against nature.

NKJV
For this reason God gave them up to vile passions. For even their women exchanged the natural use for what is against nature. 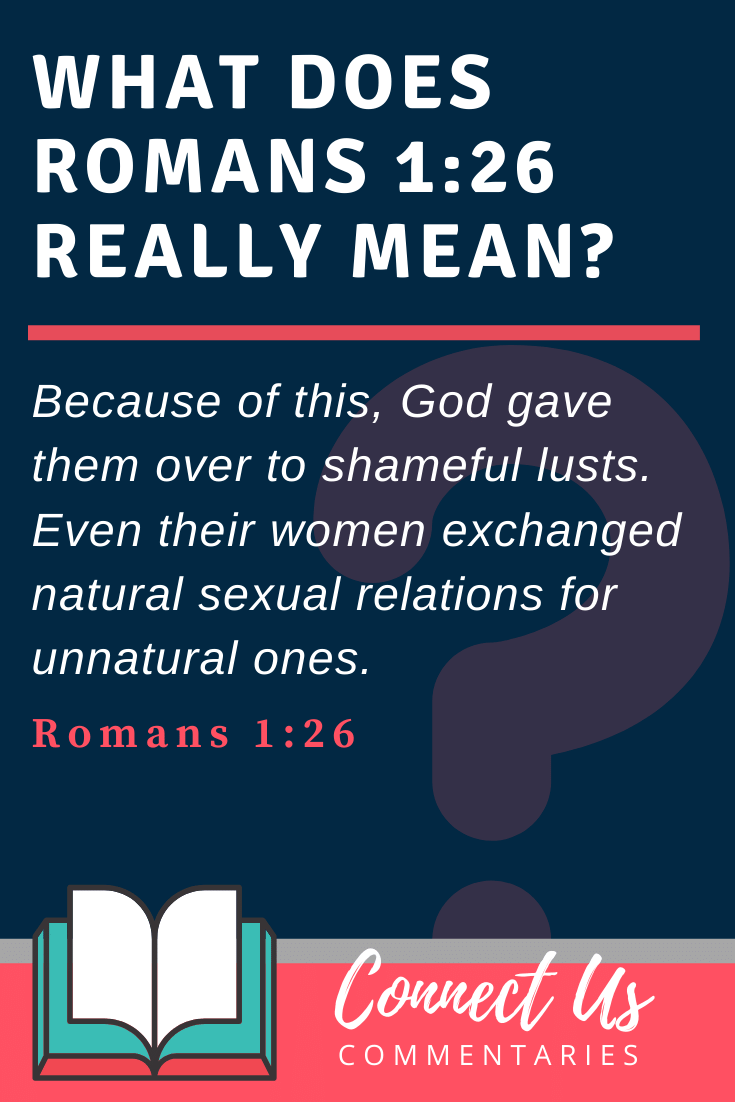