Romans 4:5
“However, to the one who does not work but trusts God who justifies the ungodly, their faith is credited as righteousness.”

Explanation and Commentary of Romans 4:5

In his attempt to explain the gospel and the principle of justification by faith, Paul invokes Abraham. Abraham, he says, was not saved by works. If Abraham had been saved by works, he could brag about earning his salvation and God’s favor. But in fact, Abraham was not saved by works, but by his belief. Because of his belief, he was given the free gift of life in Christ. He was given salvation. And how do we know Abraham had this faith, this belief? We know because when God called on him to obey him, Abraham obeyed. This was seen by God as belief, and the belief was credited as righteousness.

This is the gospel pure and simple. We don’t earn our salvation because we can’t. We are not good enough. We are “ungodly.” To be good enough is to be completely perfect. There was only one who was perfect, and it was not Abraham, far from it. It was Jesus Christ who lived a perfect life and then died our death for sin on the cross. This is the righteousness that gets credited to us who have faith. This is the justification that comes by that faith.

How can you know if you have a belief that is “credited as righteousness?” Like Abraham, do you obey God when you know what His will is? Abraham met God and received direct commands. We have God’s Word and His still small voice in our spirit. We show what we believe by how we act, and the motive that says why we act that way. If you are not sure, ask God to help you obey Him. Seek His Word and look for His clear commands in Scripture. Your obedience does not earn salvation but will serve as evidence that you believe.

Breaking Down the Key Parts of Romans 4:5

#1 “However,”
After saying, “Now to the one who works, wages are not credited as a gift but as an obligation” (Ro 4:4), Paul transitions to the contrary point he is making.

#2 “to the one who does not work…”
Paul is saying that God’s grace to us is not our wages, but a free gift. We are not working to gain his salvation. That is his gift to us.

#3 “…but trusts God who justifies the ungodly,”
This was a source of confusion for the Jews and the Greeks. Why would God justify the ungodly? Their confusion comes from the fact that they don’t realize that all men and women fall into this category, having fallen “short of the glory of God” (Ro 3:23).

#4 “their faith is credited as righteousness.”
Jesus said that the work that God requires from us is to believe (Jn 6:29). True belief will always lead to a change in behavior. But that change in behavior will never become what saves us.

NIV
However, to the one who does not work but trusts God who justifies the ungodly, their faith is credited as righteousness.

ESV
And to the one who does not work but believes in him who justifies the ungodly, his faith is counted as righteousness.

KJV
But to him that worketh not, but believeth on him that justifieth the ungodly, his faith is counted for righteousness.

NKJV
But to him who does not work but believes on Him who justifies the ungodly, his faith is accounted for righteousness. 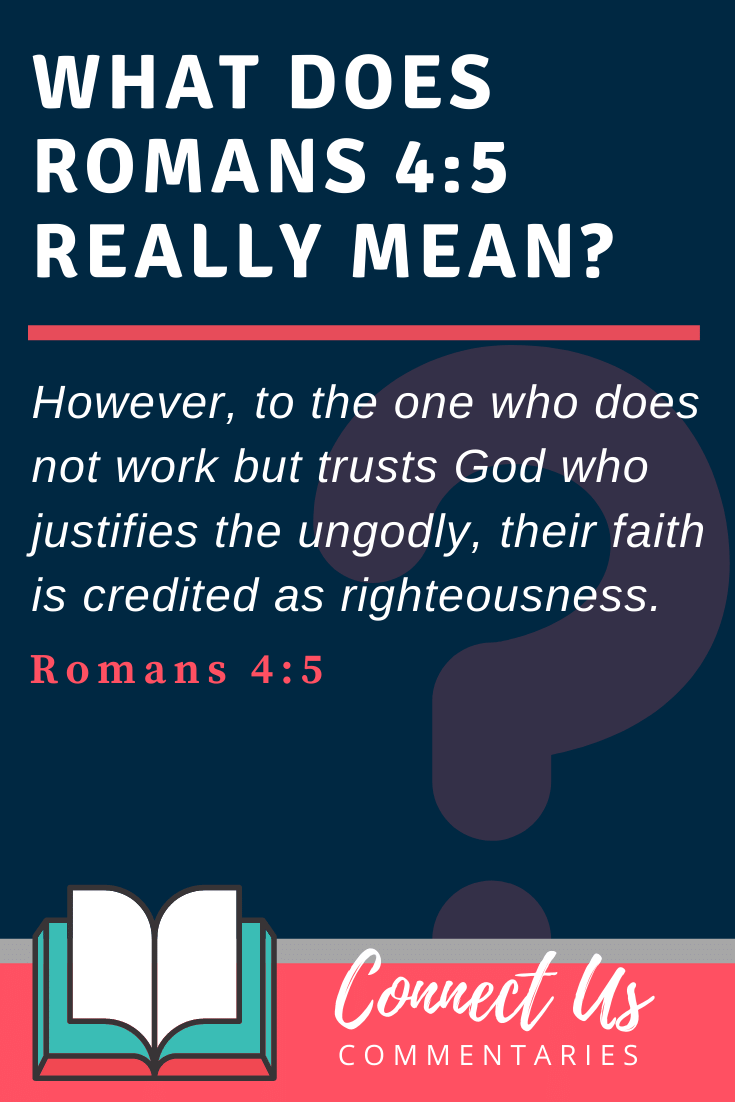