Luke 22:19 says, “And he took bread, and gave thanks, and brake it, and gave unto them, saying, This is my body which is given for you: this do in remembrance of me.”

The words “Do this in remembrance of me” are emblazoned on churches and altars around the world, and are spoken by pastors and priests every time we eat bread and drink wine (or juice) at religious gatherings. We do this in obedience to the clear command of Jesus in this passage.

The History Behind the Last Supper

The Passover was the most important festival on the Jewish calendar and was of crucial value to their nation. It commemorated God’s deliverance of the Hebrew people from slavery in Egypt and was ordained hundreds of years prior to the life of Jesus as a lasting memorial to the saving work of God.

The most important element of celebrating the Passover was the feast. It was comprised of a strict menu, each item of food and drink rich with meaning and symbolism. Religious teaching would add a great deal of ceremony and ritual to the feast, but at its core was the remembrance of God sparing the children of Israel when He killed the firstborn of the entire nation of Egypt. Each family was to kill a spotless lamb and paint its blood on the door frame to their house; the angel of death would see this blood and “pass over” that house, sparing the family (Exodus 12:1-28).

The Gift of the Last Supper

As a devout Jew, Jesus observed the Passover with His disciples each year in Jerusalem. On the night before He was crucified, He sent some of His disciples to make preparations for the Passover feast (Luke 22:7-13). They followed the same rituals of handwashing, ceremonial cups of wine, and foods that symbolized each part of the tale of God’s deliverance and the exodus of Israel from Egypt.

However, Jesus broke from the established traditional order of the meal and added a new teaching. He took one of the loaves of unleavened bread and taught His disciples that it would be a new symbol representing His body that would be broken for them (Matthew 26:26, Mark 14:22, Luke 22:19).

Next, He took one of the cups of wine and stated that it would forever represent His blood that would be poured out for the forgiveness of sins. This cup carries with it a similar instruction that they should drink it in remembrance of His teachings and actions (Matthew 26:27-28, Mark 14:23-24, Luke 22:20).

The Institution of the Last Supper

Today, we call this practice Communion or the Eucharist. It is one of several actions and practices that are considered sacraments (holy and essential practices that all believers must undertake) for Christians of all faiths.

Other such sacraments include confirmation, ordination to the priesthood, and marriage, and are usually observed by Catholic or Orthodox belief systems. For Protestants, the only sacraments that are typically required are baptism and the Lord’s Supper.

Even how Communion is served differs based on the denomination or church teaching. Some serve it during every weekly church service, while others only offer it several times throughout the year. Some churches use real wine, while others offer grape juice. There are a number of ways to serve and take Communion, all of which validly and truthfully point back to the command of Christ.

Our evidence and foundation for the establishment of Communion is found in 1 Corinthians 11:17-34. Here, we see that it had already become a vital practice for the early church, but was still cause for confusion and division among believers. Paul sought to clarify and codify not only how it should be put into practice, but to place before the church the motivation in our heart that should precede our partaking of the bread and wine.

First, Paul condemns those who treated the sacrament as simply another meal, calling out those who engorged themselves without sharing with others. Next, he repeats the teachings as outlined in the Gospels that show how Jesus instituted the meal among His first disciples. Then, He expands that teaching to say that it is a testament to the death and resurrection of Jesus that we should perform until He returns. He also states that having an unworthy heart while eating and drinking this meal is a sin in itself and that we will be judged by God for doing so without believing in Him. This is where most churches base their doctrines that only true believers are allowed to join in receiving Communion when it is offered.

The Enduring Promise of the Last Supper

Whether it is called the Lord’s Supper or Communion, there are two great promises found in Scripture that empower this sacrament with its deep meaning for believers.

First, we should always remember that Christians are to maintain the practice of the Last Supper in the same way that the Jews were commanded to observe the Passover feast and festival. We have different reasons for doing so, but they both are commanded by the same God. What’s more, the Last Supper symbolizes the perfect fulfillment of the deliverance that God gave the Israelites, which was completed for all mankind in the sacrificial death, burial, and resurrection of Jesus Christ. As Paul taught, we are to take the Lord’s Supper as a witness to the Gospel until He returns to earth (1 Corinthians 11:26).

Second, the Last Supper brings with it the hope that Jesus will return. Jesus Himself stated that this was the last time He would drink that cup with His disciples in this life, but that He would return someday and drink it with them again (Luke 22:18). This is a beautiful, blessed assurance that Jesus’ sacrifice for our salvation, while glorious and worthy of all praise, is not the end of the story. Jesus will come again and restore us to Himself, and we will eat and drink with Him in heaven forever. 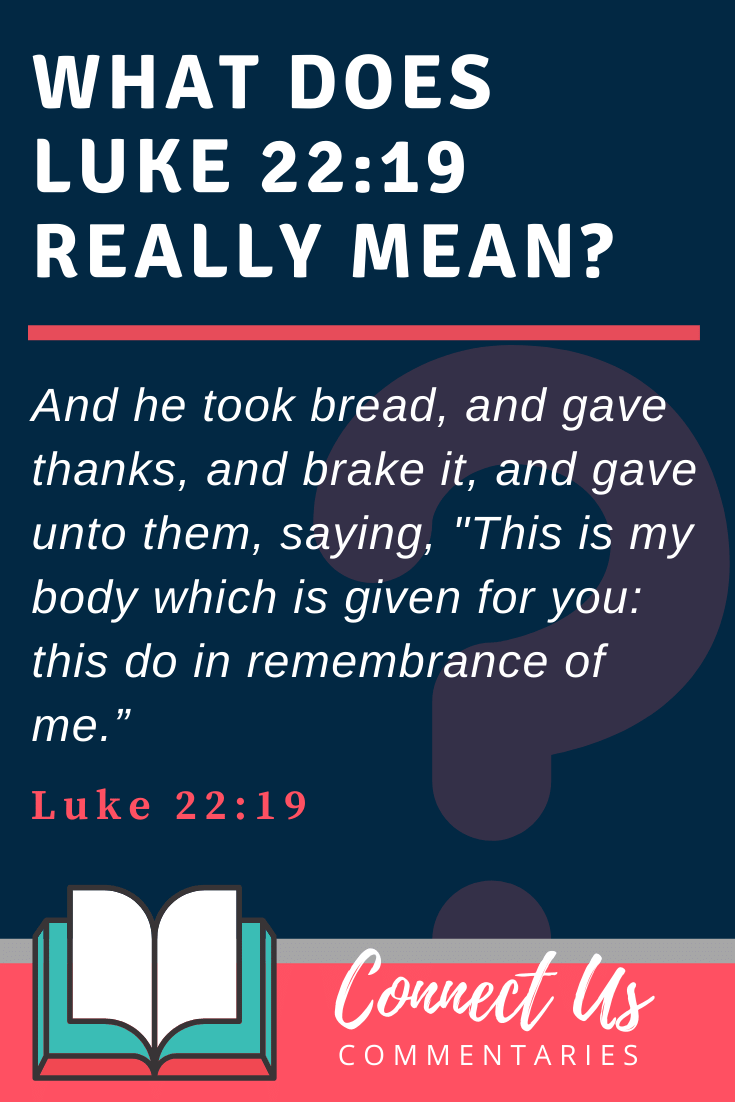