1 Corinthians 16:13
“Be on your guard; stand firm in the faith; be courageous; be strong.”

Explanation and Commentary on 1 Corinthians 16:13

Be alert to various dangers, be steadfast in your faith, act like an adult, and have a strong will so you can remain pure in the faith.

Some commentators think that Paul summed up the characteristics Christians should strive to have, using the imagery of a soldier on the verge of a battle against the Devil. To avoid his advice creating Christians that were too rigid, he followed up his advice with the next verse where he says: “Do everything in love” (1 Corinthians 16:14).

Some people have the idea that Christians should be weak, which generally comes from a misunderstanding of the virtue of “meekness” in Scripture. But “meekness” is not “weakness.” Jesus said he was meek and told us to be like him (Matthew 11:29). The New King James Version translates “meek” as “gentle.” Meekness is most often referenced in the Bible when referring to how we speak, such as: “A meek tongue is the tree of life…” (Proverbs 15:4), we should defend Scripture “…with meekness and fear…” (1 Peter 3:15), and “…a servant of the Lord must not quarrel but be gentle to all, able to teach, patient, in meekness correcting those who are in opposition…” (2 Timothy 2:24-25). Meekness means that we think about what to say, and when the right time is to say it before we do so.

Breaking Down the Key Parts of 1 Corinthians 16:13

#1: “Be on your guard…”
The King James Version translates this part of the verse as “Watch ye…” which means to stay awake or be alert. Christians at that time were in danger in various ways, such as in danger of persecution from non-Christians, in danger of fighting within the congregation that bred divisiveness, in danger of becoming corrupted by false teachers, and in danger of treating others in a way that was not Christlike.

#2: “…stand firm in the faith…”
Do not let yourself become corrupted by the ways of the world. Continue to believe in the Scriptures which Paul had taught to them about their salvation.

#3: “…be courageous…”
The King James Version translates this part of the verse as “…quit you like men…” It means that you should not be childlike, but instead use the knowledge and understanding of an adult so that you are not afraid of the people who try to corrupt or divide you. Instead, you should fight for your faith.

#4: “…be strong.”
Have a strong will to oppose people who try to corrupt or divide you.

NIV
Be on your guard; stand firm in the faith; be courageous; be strong.

NLT
Be on guard. Stand firm in the faith. Be courageous. Be strong.

ESV
Be watchful, stand firm in the faith, act like men, be strong.

KJV
Watch ye, stand fast in the faith, quit you like men, be strong.

NKJV
Watch, stand fast in the faith, be brave, be strong. 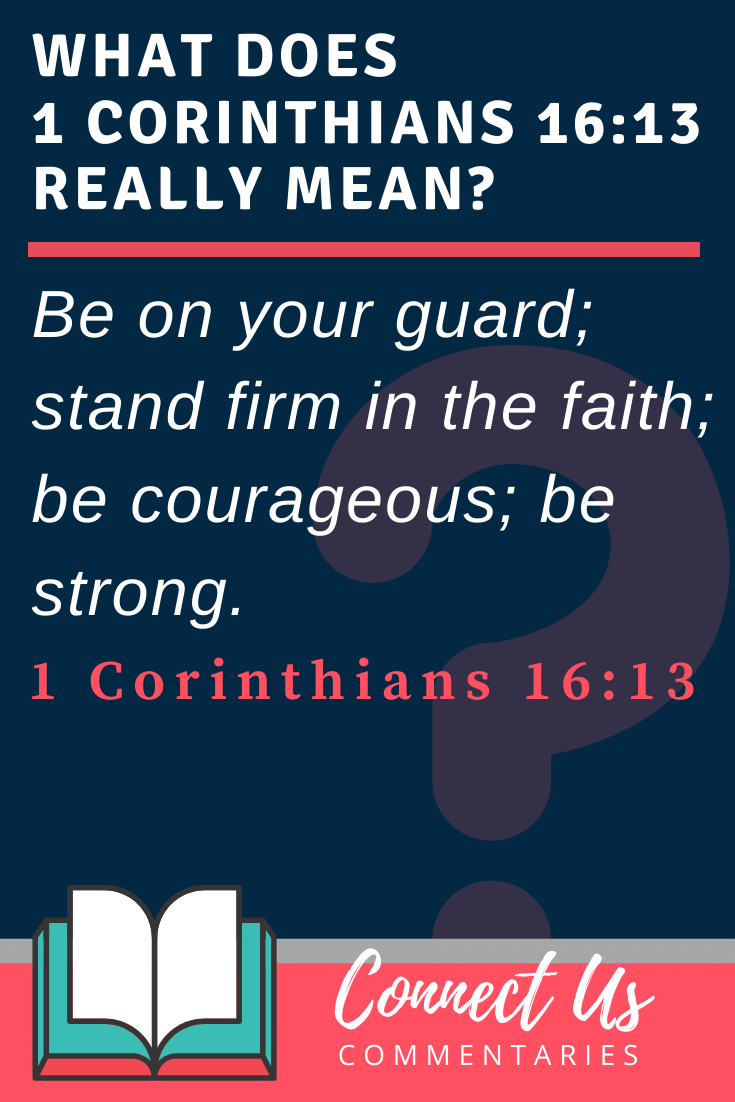