1 Corinthians 5:11
“But now I am writing to you that you must not associate with anyone who claims to be a brother or sister but is sexually immoral or greedy, an idolater or slanderer, a drunkard or swindler. Do not even eat with such people.”

Explanation and Commentary on 1 Corinthians 5:11

This verse means that you should not associate with people who claim to be Christians but who commit any sexual act outside of marriage, are greedy or jealous, commit idolatry, lie about others, are alcoholics, or who cheater people.

Paul communicated this message to the Christians in the city of Corinth, who were guilty of various sexual and other transgressions. He told the Christians that they should not associate, talk to or do business with those people who purport to be Christians while committing certain sins. Until these sinners correct their behaviors, true Christians should shun them entirely.

This directive was meant to keep the Corinthian church from becoming complacent about the immoral behavior among their Christian congregation. While we should expect this kind of behavior from people who do not know Jesus, we should not tolerate it from Christians. Paul continues in this part of scripture to tell Christians that it is God’s job to judge unbelievers and that Christians should focus their attention on the behavior of those inside the church.

Paul’s focus on purity inside the church was because unbelievers accused Christians of various sins, which injured the reputation of the church by making Christians look wicked. Paul wanted to separate true Christians from those that professed to be Christians so that the world could clearly see the difference in the lives led by Christians.

At first, Romans 14:13 appears to be a contradiction to this verse. In Romans, Paul tells us we are not to judge one another, but he means that the final judgment is for God to do. Here in 1 Corinthians, Paul is telling us that we should judge the actions of other Christians so that we confront sin.

Breaking Down the Key Parts of 1 Corinthians 5:11

#1 “But now I am writing to you that you must not associate with anyone who claims to be a brother or sister…”
Paul was writing about people who claim to be brothers or sisters in Christ or claim to be Christians.

#2 “…but is sexually immoral or greedy, an idolater or slanderer, a drunkard or swindler.”
The term “sexually immoral” is from the Greek word porneia, which originally referred to going to prostitutes, but starting before the New Testament, it started to be used to mean any sexual activity outside of marriage. In discussing sexual immorality, Paul specifically includes incest (1 Corinthians 5:1). The views on sexually acceptable behavior between the Greek and the Christian cultures dramatically clashed, such that behavior a Greek viewed as common was viewed as immoral by a Christian.

#3 “Do not even eat with such people.”
Eating with someone in the time of Paul’s writing was a sign of friendship and fellowship. In our culture today, Paul is telling us that we cannot do anything that shows that we associate with such people or recognize them as Christians.

NIV
But now I am writing to you that you must not associate with anyone who claims to be a brother or sister but is sexually immoral or greedy, an idolater or slanderer, a drunkard or swindler. Do not even eat with such people.

NLT
I meant that you are not to associate with anyone who claims to be a believer yet indulges in sexual sin, or is greedy, or worships idols, or is abusive, or is a drunkard, or cheats people. Don’t even eat with such people.

ESV
But now I am writing to you not to associate with anyone who bears the name of brother if he is guilty of sexual immorality or greed, or is an idolater, reviler, drunkard, or swindler—not even to eat with such a one.

KJV
But now I have written unto you not to keep company, if any man that is called a brother be a fornicator, or covetous, or an idolator, or a railer, or a drunkard, or an extortioner; with such an one no not to eat.

NKJV
But now I have written to you not to keep company with anyone named a brother, who is sexually immoral, or covetous, or an idolater, or a reviler, or a drunkard, or an extortioner—not even to eat with such a person. 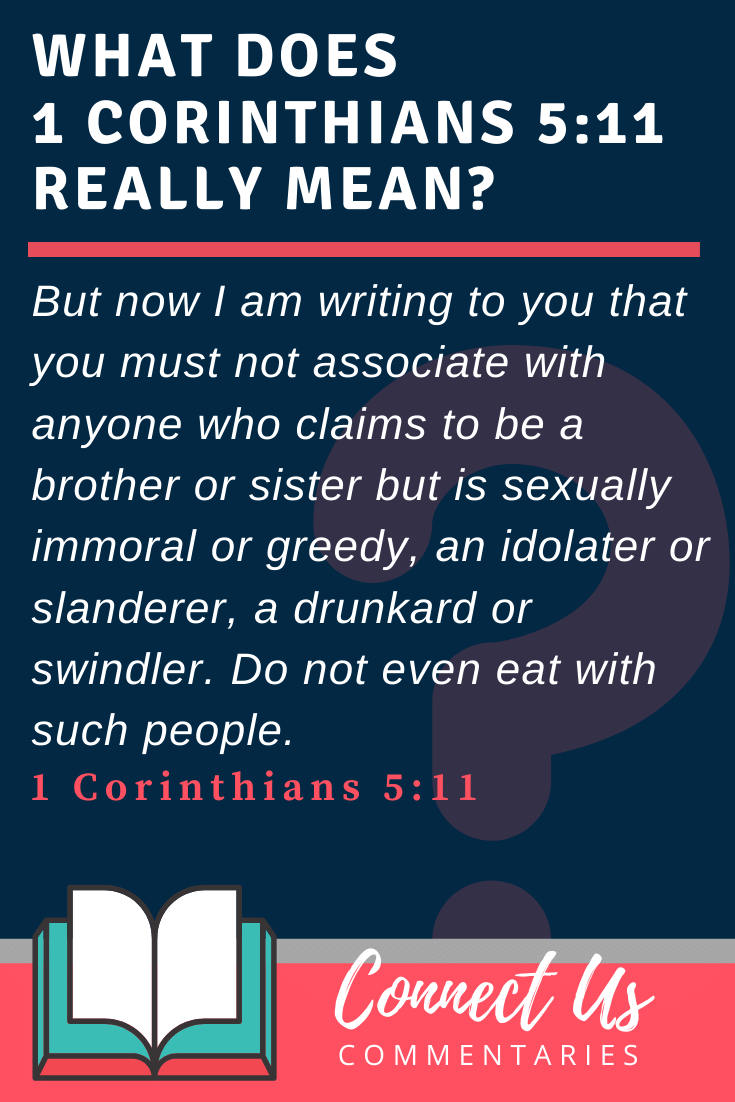