1 Corinthians 9:24
“Do you not know that in a race all the runners run, but only one gets the prize? Run in such a way as to get the prize.”

Explanation and Commentary on 1 Corinthians 9:24

This verse means that in a human race there is only one winner and that you should run the race to win. But this verse needs to be understood in context, which is explained in the following commentary.

Paul was speaking about the Isthmian Games, which were well-known by the Corinthians. In ancient Greece, the Isthmian games were held near Corinth on a small part of the land that connects the Peloponnesian peninsula with central Greece, otherwise known as an “isthmus.” These games had races, fights and musical competitions in honor of the sea god Poseidon.

Paul is using the Isthmian games as a comparison to the Christian race. His emphasis is not on being first to cross the finish line, but rather on how Christians live their lives. Those that ran and fought in the Isthmian games kept a strict diet, trained and exercised self-control (1 Corinthians 9:25). These participants controlled their actions and improved themselves over time for a prize that was a crown of leaves and human praise (1 Corinthians 9:25).

The prize in the Isthmian games, for which athletes put forth so much effort, is nothing compared to the prize of eternal life in heaven that awaits Christians after their spiritual journey on this earth has ended. Though Paul used the analogy of an athlete’s training to Christian training, he did not intend us to interpret our training and maturing as Christians to be an individual endeavor or to be one where the goal is self-improvement. Instead, Paul preaches unity (1 Corinthians 1:10) and the goal of teaching the gospels to others (1 Corinthians 9:23).

It is so much more important to practice self-discipline and live a Christian life in the Christian race, where everyone who crosses the finish line – not just the first person – can win the incorruptible crown, which is the eternal prize of heaven (1 Corinthians 9:25-26). There is a parallel passage in 2 Timothy 4:7-8 where Paul talks and fighting and racing to receive the “crown of righteousness.” This crown is the reward for his efforts to be holy and spread Christianity throughout the world.

Breaking Down the Key Parts of 1 Corinthians 9:24

#1: “Do you not know that in a race all the runners run, but only one gets the prize?”
Just as in modern competitions, in these Greek Olympics, there could be only one victor in each competition. People will not win merely for completing the challenge, instead, they must be the first to do so. Here Paul is hinting that all Christians can obtain heaven, not just whoever is first in the race. Paul later in this passage more explicitly refers to this certainty of heaven for living a Christian life (1 Corinthians 9:26).

#2: “Run in such a way as to get the prize.”
In their lifelong effort to act as Christ would act in their daily lives, Paul encourages Christians to live in a way like they are striving to be the victor of a race in how the victor is dedicated to the challenge and sets forth much effort in his training and competing.

NIV
Do you not know that in a race all the runners run, but only one gets the prize? Run in such a way as to get the prize.

NLT
Don’t you realize that in a race everyone runs, but only one person gets the prize? So run to win!

ESV
Do you not know that in a race all the runners run, but only one receives the prize? So run that you may obtain it.

KJV
Know ye not that they which run in a race run all, but one receiveth the prize? So run, that ye may obtain.

NKJV
Do you not know that those who run in a race all run, but one receives the prize? Run in such a way that you may obtain it. 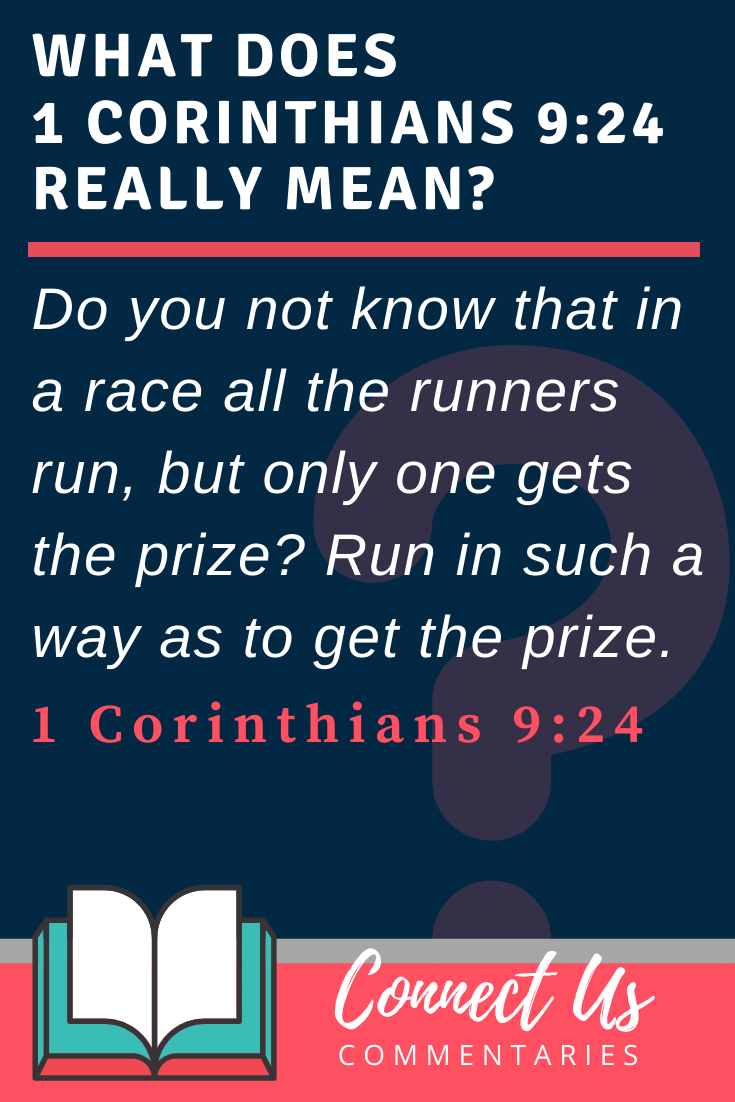