1 Corinthians 9:27
“No, I strike a blow to my body and make it my slave so that after I have preached to others, I myself will not be disqualified for the prize.”

Explanation and Commentary on 1 Corinthians 9:27

This verse means that Paul gained control over and did not indulge in fleshly desires so that he could go to heaven.

Paul was speaking about the Isthmian Games, which were well-known by the Corinthians. In ancient Greece, the Isthmian games were held near Corinth on a small part of the land that connects the Peloponnesian peninsula with central Greece, otherwise known as an “isthmus.” These games had races, fights and musical competitions in honor of the sea god Poseidon.

Paul is comparing the Isthmian games to the Christian race. His emphasis is not on being first to cross the finish line, but rather on how Christians lived their lives. Those that ran and fought in the Isthmian games kept a strict diet, trained and exercised self-control (1 Corinthians 9:25). So must Christians be disciplined in how they live their lives if they are going to obtain the prize of heaven.

Breaking Down the Key Parts of 1 Corinthians 9:27

#1: “No, I strike a blow to my body and make it my slave…”
No actual slave was permitted to participate in the games, and neither were servants, people in the military, nor anyone of bad character. In this part of the verse, Paul was alluding to the boxers and wrestlers in the Isthmian games hitting and tripping their opponents and then keeping their opponents down in defeat. In Paul’s Christian life, Paul meant that he took great pains to conquer the fleshly inclinations of his body and make his body yield to the desires of his soul. He meant that he strived to gain victory over his sinful urges.

#2: “…so that after I have preached to others,….”
This part of the verse is plain English for Paul preaching the gospel to others. Some commentators contend that this part of the verse continues the allusion to the Olympian games and refers to the announcers at the games who introduced the competitors in the games and declared the winners. Such an interpretation would break the metaphor, as it would have Paul being both a competitor and an announcer in the same games.

#3: “…I myself will not be disqualified for the prize.”
In spite of the success of Paul’s ministry in helping others be saved, Paul was still fearful that he would be rejected by God and not be able to go to heaven. He was afraid that he was not living as a Christian should live, and did not rely on his past works to comfort him.

NIV
No, I strike a blow to my body and make it my slave so that after I have preached to others, I myself will not be disqualified for the prize.

NLT
I discipline my body like an athlete, training it to do what it should. Otherwise, I fear that after preaching to others I myself might be disqualified.

ESV
But I discipline my body and keep it under control, lest after preaching to others I myself should be disqualified.

KJV
But I keep under my body, and bring it into subjection: lest that by any means, when I have preached to others, I myself should be a castaway.

NKJV
But I discipline my body and bring it into subjection, lest, when I have preached to others, I myself should become disqualified. 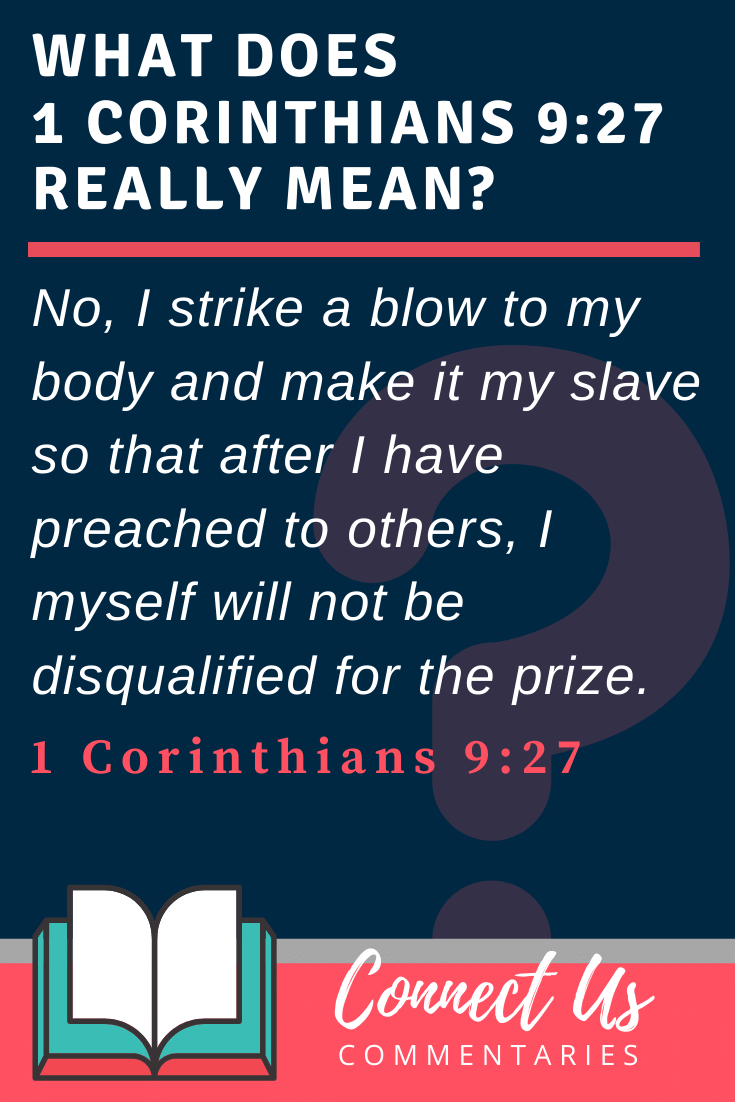