1 Peter 5:10
“And the God of all grace, who called you to his eternal glory in Christ, after you have suffered a little while, will himself restore you and make you strong, firm and steadfast.”

Explanation and Commentary on 1 Peter 5:10

What an amazing promise this is for those who resist the evil one as he attempts to devour the church through suffering and persecution (1 Pt 5:8-9). No suffering will last forever for the believer in Christ.  Peter is writing to Christians who have been undergoing a large amount of persecution. He encourages them by explaining that none of their suffering is in vain, but is meant to produce spiritual fruit as a “refining fire” for the Christian (1 Peter 1:6-7).

He makes the amazing statement in chapter four that “it is time for judgment to begin with God’s household; and if it begins with us, what will the outcome be for those who do not obey the gospel of God” (1 Pt 4:17)? It appears that Peter is saying that the suffering we face on earth is some kind of deposit on judgment. For the believer, it is meant to refine us and prepare us for glory and reward at the Final Judgment.  For the nonbeliever, it seems to be a beginning of the eternal conscious torment of hell for those who reject God and rebel against him by persistent unbelief.

#1 “And the God of all grace,”
Our Father in heaven is indeed the “God of all grace.” There is no mercy that doesn’t come from his hand. We have nothing that we don’t receive from him. Our salvation is purely a gift from God, to be received gratefully.  All blessings flow from the throne of God.

#2 “who called you…”
To be human is to be a divine image-bearer. To bear God’s image is to be given a will and a delegated authority to make decisions. Thus, it is right and good to be held accountable for our choices.  That said, the Bible is also clear that, because of our sinful nature, we are unable to come to God apart from his will to draw us to him (Jn 6:44).

#3 “…to his eternal glory in Christ,”
We belong to God because he has called us to his eternal glory in Christ. Christ saw his death and resurrection as his “glorification” (Jn 12:23).  The final stage of our own process of salvation and sanctification is also called “glorification” (Ro 8:30). 1 John 3:2 says, “what we will be has not yet been made known. But we know that when Christ appears, we shall be like him, for we shall see him as he is.” Whatever it will mean to be glorified going into the New Heavens and New Earth, will be something akin to what Jesus is in his own glorification.

#4 “after you have suffered a little while, will himself restore you and make you strong, firm, and steadfast.”
Whenever we are suffering we must rest assured that our suffering is meant to produce restoration, strength, and steadfastness.  It is never we who produce this in ourselves, but Jesus himself who builds us into what he has designed us to be. Take heart when you are suffering. It is never in vain.

NIV
And the God of all grace, who called you to his eternal glory in Christ, after you have suffered a little while, will himself restore you and make you strong, firm and steadfast.

NLT
In his kindness God called you to share in his eternal glory by means of Christ Jesus. So after you have suffered a little while, he will restore, support, and strengthen you, and he will place you on a firm foundation.

ESV
And after you have suffered a little while, the God of all grace, who has called you to his eternal glory in Christ, will himself restore, confirm, strengthen, and establish you.

KJV
But the God of all grace, who hath called us unto his eternal glory by Christ Jesus, after that ye have suffered a while, make you perfect, stablish, strengthen, settle you.

NKJV
But may the God of all grace, who called us to His eternal glory by Christ Jesus, after you have suffered a while, perfect, establish, strengthen, and settle you. 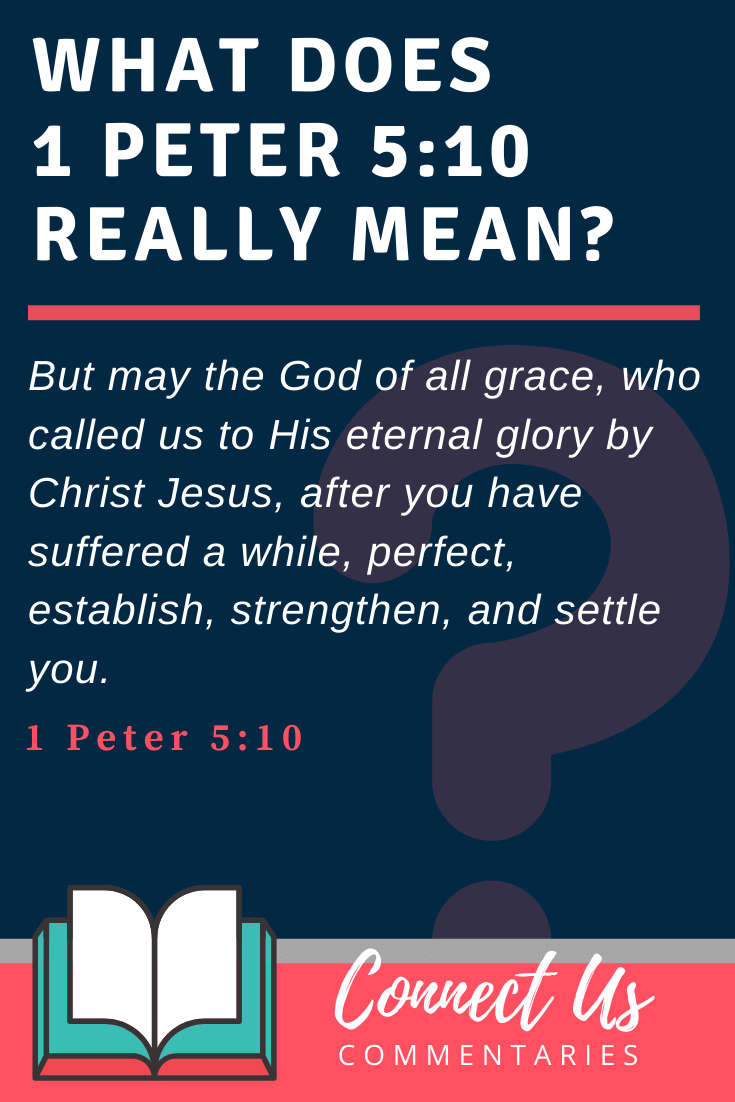