1 Timothy 2:12
“I do not permit a woman to teach or to assume authority over a man; she must be quiet.”

Explanation and Commentary of 1 Timothy 2:12

While many today claim this verse to be complicated or at least complex, it is only made so by the cultural climate in which today’s Church finds itself. God had made men and women equals in intrinsic value (Gal 3:28), but he has made a clear distinction concerning the roles they play on the earth. Men and women have unique responsibilities and each bears their own honor.

One role that is unique to men is being the head of his wife (1 Cor 11:3; Eph 5:23). This was a relationship defined before the fall, though the fall caused there to be conflict in this, especially today. The other role that is unique to males is that of leadership and teaching in Jesus’s Church and the local expression of it. While one could argue that there are many reasons behind God’s design in this, the thing that matters the most is that it is the clearest teaching of Scripture. There is not a counter-argument to male leadership that does not start with culture, the feminist spirit of the age, or emotionalism.

As for being quiet, it is clear from Scripture that there is some room for a woman to speak in church under the authority of her “covering.” This may include prophesying and speaking in tongues, but not teaching the Bible. Mature Christian women are exhorted to teach younger women, but the context in which they do so is not spelled out as clearly as the prohibition to positions of authority in the church or the home.

Breaking Down the Key Parts of 1 Timothy 2:12

#1 “I do not permit…”
Paul is authoritative as a holder of the office of apostle (1 Cor 1:1). When he says he does “not permit” he is speaking as a prophet who writes Holy Scripture.

#3 “she must be quiet.”
This seems to the feminist like salt on the wound. There may be some context that sparked Paul’s addressing of the situation, but it would not stand that the prohibition only applies in Ephesus where Timothy was. Women should be treated respectfully, and it would be sinful for men to Lord this over the women in the church. But it would be equally sinful to ignore it, and it would be harmful to the woman who was encouraged to disobey Scripture. In our day the only way equality is recognized is if there is no distinction between men and women, but God has designed in them their greatest dignity in the differences.

NIV
I do not permit a woman to teach or to assume authority over a man; she must be quiet.

NLT
I do not let women teach men or have authority over them. Let them listen quietly.

ESV
I do not permit a woman to teach or to exercise authority over a man; rather, she is to remain quiet.

KJV
But I suffer not a woman to teach, nor to usurp authority over the man, but to be in silence.

NKJV
And I do not permit a woman to teach or to have authority over a man, but to be in silence. 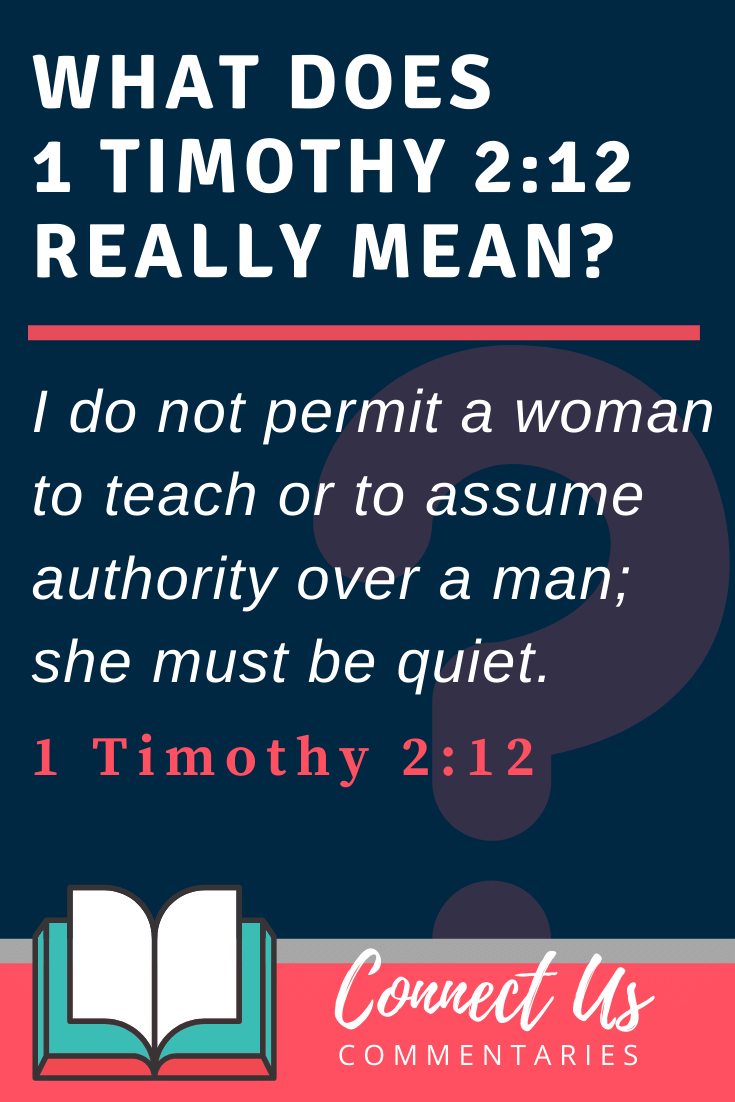