1 Timothy 6:10
“For the love of money is a root of all kinds of evil. Some people, eager for money, have wandered from the faith and pierced themselves with many griefs.”

Explanation and Commentary of 1 Timothy 6:10

The love of money is deceptive. People, even Christians who love money, can rarely see it in themselves. It is this love that Paul tells Timothy is behind so much evil action. He has been writing about “godliness with contentment” (6). When a person loves money, there is an idol behind that love. They want status, power, pleasure. The love of money will cause them to sin in order to get that money. Even ministers have given in to temptation and stolen from their churches from the gifts given by God’s people in worship.

The love of money will be insatiable for the one who has succumbed to it. They always need a little more than they have. This is a failure to trust God for our daily bread. A responsible person will have to save money, particularly when raising a family. If payday is Monday and the rent is due on Friday, then it must be saved at least until Friday to avoid being an undue burden on someone else.

Unfortunately, many people spend everything that they have on their pleasures and comfort, unable to delay gratification, and say that they don’t save because they don’t love money. This is also a deception.

Breaking Down the Key Parts of 1 Timothy 6:10

#1 “For the love of money…”
This verse is often misquoted as “Money is the root of all evil.” But that is not precisely true. “The love of money” is the subject. Money is a neutral thing. A good steward will work hard to make money, then delay gratification with self-control in order to spend less than he or she makes. Even though it is godly for a person to save money to be used later for good, we should not get obsessed with amassing wealth. Rather, we should be obsessed with God, his Kingdom, and his righteousness.

#2 “…is a root of all kinds of evil.”
There is more than one root of evil. Sinful nature is probably the root of all evil. Loving money is a root, leading to all manner of sin as a means of obtaining that which one loves. Lying, cheating, stealing, hoarding, and working without scruples about what one has to do for pay are various kinds of evil that can be caused by the love of money.

#3 “Some people, eager for money,”
Eagerness for money has taken hold of some people already by the time of Paul’s writing. Jesus said that some would hear the word and would be like the seed that fell on thorns. The plant would at once spring up, but troubles of the world and the “deceitfulness of wealth” would cause them to be fruitless.

#4 “Have wandered away from the faith…”
If one is truly saved, he or she will not totally leave the faith (1 Jn 2:19). The only people who truly leave are people who were never really saved. Paul could be talking about these people, or he could be talking about Christians who don’t lose their salvation, but barely make it, never realizing the true joy of abundant life in Christ, living as virtual non-Christians until heaven, where they just barely get in, but with the least reward (1 Cor 3:15).

#5 “…pierced themselves with many griefs.”
How truly sad to see someone wander out of the light and into the darkness. There is nothing but grief there, especially when one has been shown the narrow path of life. When someone is in the grip of the love of money or any idolatry, they are generally blind to it and cannot be stopped from harming themselves. Hindsight is twenty-twenty, and sometimes God will mercifully grant repentance that comes along with hitting bottom when what a person thought would satisfy fails them.

NIV
For the love of money is a root of all kinds of evil. Some people, eager for money, have wandered from the faith and pierced themselves with many griefs.

NLT
For the love of money is the root of all kinds of evil. And some people, craving money, have wandered from the true faith and pierced themselves with many sorrows.

ESV
For the love of money is a root of all kinds of evils. It is through this craving that some have wandered away from the faith and pierced themselves with many pangs.

KJV
For the love of money is the root of all evil: which while some coveted after, they have erred from the faith, and pierced themselves through with many sorrows.

NKJV
For the love of money is a root of all kinds of evil, for which some have strayed from the faith in their greediness, and pierced themselves through with many sorrows. 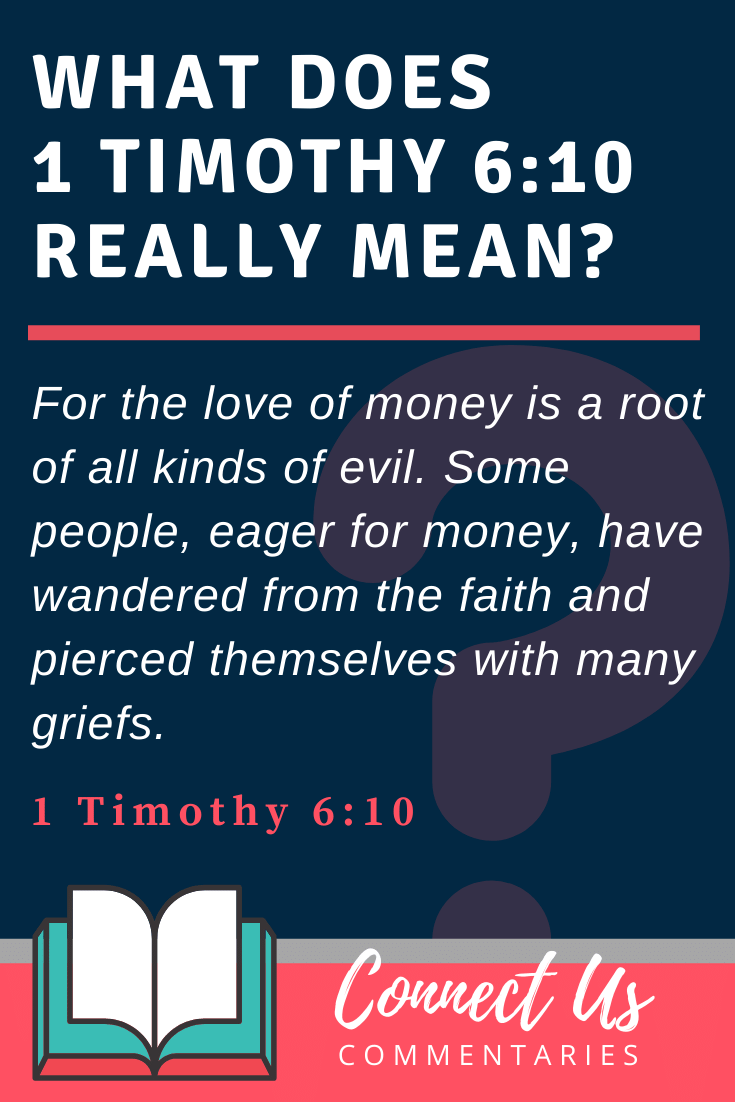