2 Corinthians 3:6
“He has made us competent as ministers of a new covenant—not of the letter but of the Spirit; for the letter kills, but the Spirit gives life.”

Explanation and Commentary on 2 Corinthians 3:6

The grace of God has allowed ministers of the gospels to preach the gospels, which are the path to everlasting life.

#1: “He has made us competent… ”
It is by the grace of God that His apostles and others are able to serve God by spreading His Word. Paul is acknowledging that he is merely a vessel and is useless without God working through him to spread the new covenant.

#2: “…as ministers… ”
“Ministers” means servants, not preachers, who are actively doing the work of God. Paul is also indirectly referencing false prophets who teach the importance of Mosaic law. These false prophets are false because they are not acting by and through the grace of God.

#3: “…of a new covenant… ”
This refers to the gospels. The gospels record the life of Jesus Christ and his followers of that time. Some commentators say the “new covenant” was a reference to the New Testament, but others argue that is incorrect because many of the books of the New Testament had not yet been written, and it is unlikely that the “New Testament” as the collection of books as we know it today was contemplated at that time.

The “new covenant” is in contrast to the Old Testament, which is the first 39 books of the Bible and approximately corresponds to the Hebrew Bible. The Old Testament records the law of Moses, according to which the ancient Israelites were to live.

#4:”…not of the letter…”
Not of the Mosaic law. The Mosaic law is referred to as the “letter” because it tells people what they should and should not do. It is a series of writings that regulate moral and civil actions. Mosaic law is not a path to everlasting life.
Some commentators interpret “letter” to mean the literal interpretation of the Scriptures (as opposed to the spiritual meaning), but this is not the currently favored interpretation.

#5: “…but of the Spirit…”
But of the gospels. Some commentators have pointed out that others have erred in interpreting “Spirit” to mean the Holy Spirit, and that “Spirit” should not be capitalized here, as it refers instead to the gospels which penetrate into the hearts of Christians. Yet other commentators think “Spirit” refers to the spiritual meaning (as opposed to the literal meaning) of the Scriptures, but this is not the current mainstream view.

#6: “…for the letter kills…”
The Mosaic law breeds guilt and proscribes punishments for violating the law, including issuing death sentences to offenders. Another interpretation of this part of the verse is that those people who cling to Mosaic law and do not follow the law of Jesus will not receive everlasting life.

#7: “…but the Spirit gives life.”
The gospels are from God. They have the power of God in them. Believers and followers of the gospels receive God’s Word into their hearts. These Christians are saved and will have everlasting life with Jesus in Heaven.

NIV
He has made us competent as ministers of a new covenant—not of the letter but of the Spirit; for the letter kills, but the Spirit gives life.

NLT
He has enabled us to be ministers of his new covenant. This is a covenant not of written laws, but of the Spirit. The old written covenant ends in death; but under the new covenant, the Spirit gives life.

ESV
Who has made us sufficient to be ministers of a new covenant, not of the letter but of the Spirit. For the letter kills, but the Spirit gives life.

KJV
Who also hath made us able ministers of the new testament; not of the letter, but of the spirit: for the letter killeth, but the spirit giveth life.

NKJV
Who also made us sufficient as ministers of the new covenant, not of the letter but of the [a]Spirit; for the letter kills, but the Spirit gives life. 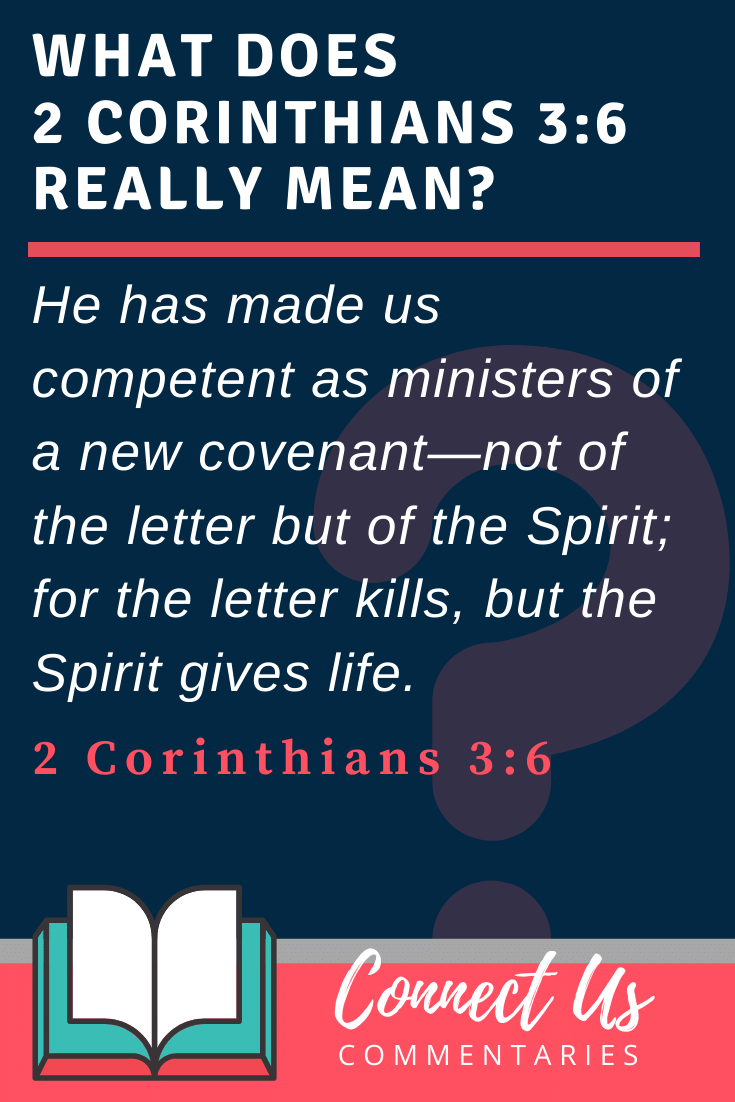