2 Corinthians 4:11
“For we who are alive are always being given over to death for Jesus’ sake, so that his life may also be revealed in our mortal body.”

Explanation and Commentary on 2 Corinthians 4:11

The apostles are being killed to magnify the greatness of God.

Paul addressed the real physical and emotional sufferings of the apostles in 2 Corinthians 4. The apostles were troubled and confused but did not despair. They were physically and verbally hunted and attacked, but not destroyed. Through it all, the apostles maintained their courage and continued their ministries. They continued because they knew that just as Jesus was raised from the dead to ascend into Heaven, the apostles too would either be raised after death or they would be raised directly into Heaven without dying if the second coming of Jesus came when they were alive. (2 Corinthians 5:1-4).

After Paul’s conversion to Christianity, God said: “I will show him how much he must suffer for my name” (Acts 9:16) and the long list of sufferings to come began immediately. People attempted to stone him in Iconium (Acts 14:5), they did stone him and thought they killed him in Lystra (Acts 14:19) and they beat him with rods in Philippi (Acts 16:23-24). Most commentators think Pau was beheaded in Rome, though the Bible is silent on his cause of death.

In the end, all of the apostles except for John died an unnatural death. Judas hanged himself, James the son of Zebedee was executed by Herod, Peter was crucified (upside down at his request), Andrew was crucified, Thomas was speared to death, Matthew was stabbed to death (though some contend he was not martyred), James was stoned then clubbed, Matthais (chosen to replace Judas) was burned. It is unclear what type of unnatural death Philip, Bartholomew, Simon the Zealot suffered.

Breaking Down the Key Parts of 2 Corinthians 4:11

#1: “For we who are alive…
The apostles who were still alive on earth.

#2: “…are always being given over to death…”
Are always under continual threats of death.

#4: “…so that his life may also be revealed in our mortal body.”
So that the greatness of the teachings of Jesus may be more obvious in contrast to the miserable human lives of the apostles. This part of the verse has the same concept as 2 Corinthians 4:7 and the imagery of the jars of clay.

NIV
For we who are alive are always being given over to death for Jesus’ sake, so that his life may also be revealed in our mortal body.

NLT
Yes, we live under constant danger of death because we serve Jesus, so that the life of Jesus will be evident in our dying bodies.

ESV
For we who live are always being given over to death for Jesus’ sake, so that the life of Jesus also may be manifested in our mortal flesh.

KJV
For we which live are always delivered unto death for Jesus’ sake, that the life also of Jesus might be made manifest in our mortal flesh.

NKJV
For we who live are always delivered to death for Jesus’ sake, that the life of Jesus also may be manifested in our mortal flesh. 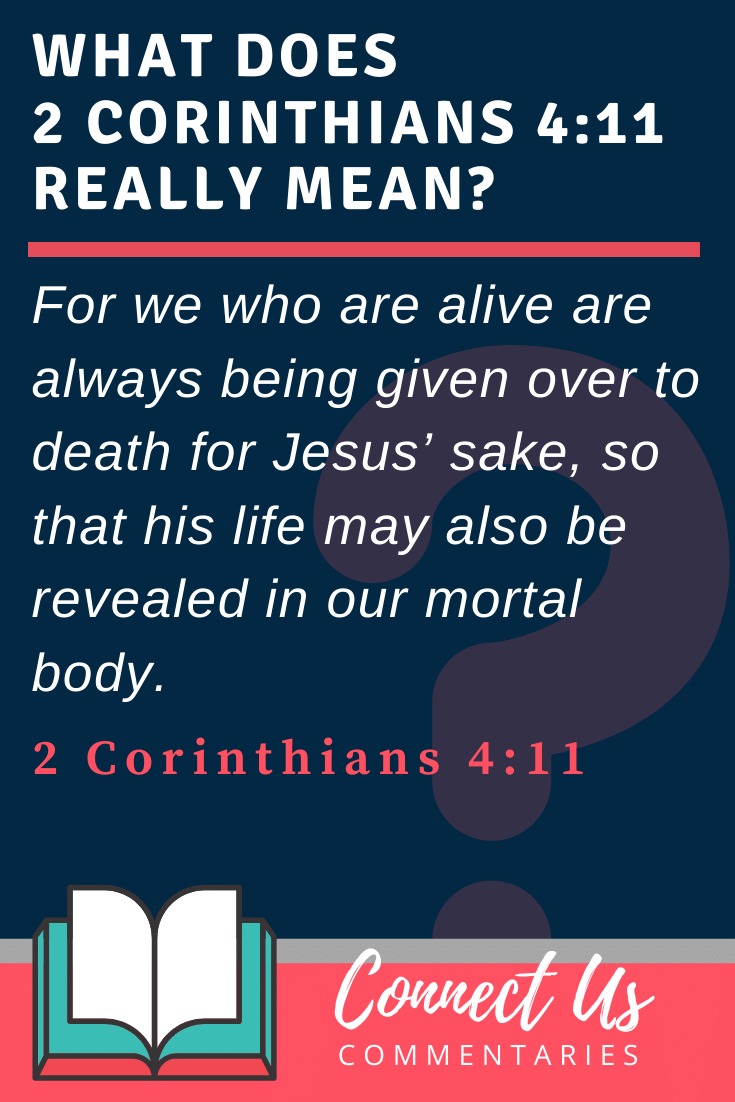