2 Corinthians 4:7
“But we have this treasure in jars of clay to show that this all-surpassing power is from God and not from us.”

Explanation and Commentary on 2 Corinthians 4:7

We are instruments of God.

Jars of clay were common in every house in the ancient world, were inexpensive, and were not as durable as alternate vessels such as those made of metal or glass. As Christians are referred to in this verse as these clay jars, this does not mean that we are insufficient or of little value. It just means that no human, no mere mortal, could possibly be adequate enough to hold God’s infinitely awesome treasure.

The Bible uses other clay pot imagery such as in the story of Gideon where his army smashed clay pots, blew trumpets and shouted to scare the Midianites and defeat them in battle against great disadvantage (Judges 7:16-20). This verse showed how God could take something inexpensive and use it for great victory. Romans 9:19-21 reminds us that God, as the potter, can take a lump of clay and make a vessel for His honorable use.

Some commentators view this verse in the larger context of 2 Corinthians 4:7-18, which addresses the real physical and emotional sufferings of the apostles. The apostles were troubled and confused but did not despair. They were physically and verbally hunted and attacked, but not destroyed. Through it all, the apostles maintained their courage and continued their ministry, knowing that just as Jesus was raised from the dead to ascend into Heaven, the apostles too would either be raised after death or, if the second coming of Jesus came when they were alive, they would be raised directly into Heaven without dying. Until they went to Heaven, they were imperfect, mortal instruments in service to the Lord.

Breaking Down the Key Parts of 2 Corinthians 4:7

#1: “But we have this treasure…”
Christians have the glory of the gospels.

#3: “…to show that this all-surpassing power is from God and not from us.”
When God puts His treasure in clay pots instead of a stronger container, it is clear and obvious to everyone that the power within us comes from God. If the container were strong, people would not as clearly see, or perhaps not understand at all, that the power is indeed from God.

NIV
But we have this treasure in jars of clay to show that this all-surpassing power is from God and not from us.

NLT
We now have this light shining in our hearts, but we ourselves are like fragile clay jars containing this great treasure. This makes it clear that our great power is from God, not from ourselves.

ESV
But we have this treasure in jars of clay, to show that the surpassing power belongs to God and not to us.

KJV
But we have this treasure in earthen vessels, that the excellency of the power may be of God, and not of us.

NKJV
But we have this treasure in earthen vessels, that the excellence of the power may be of God and not of us. 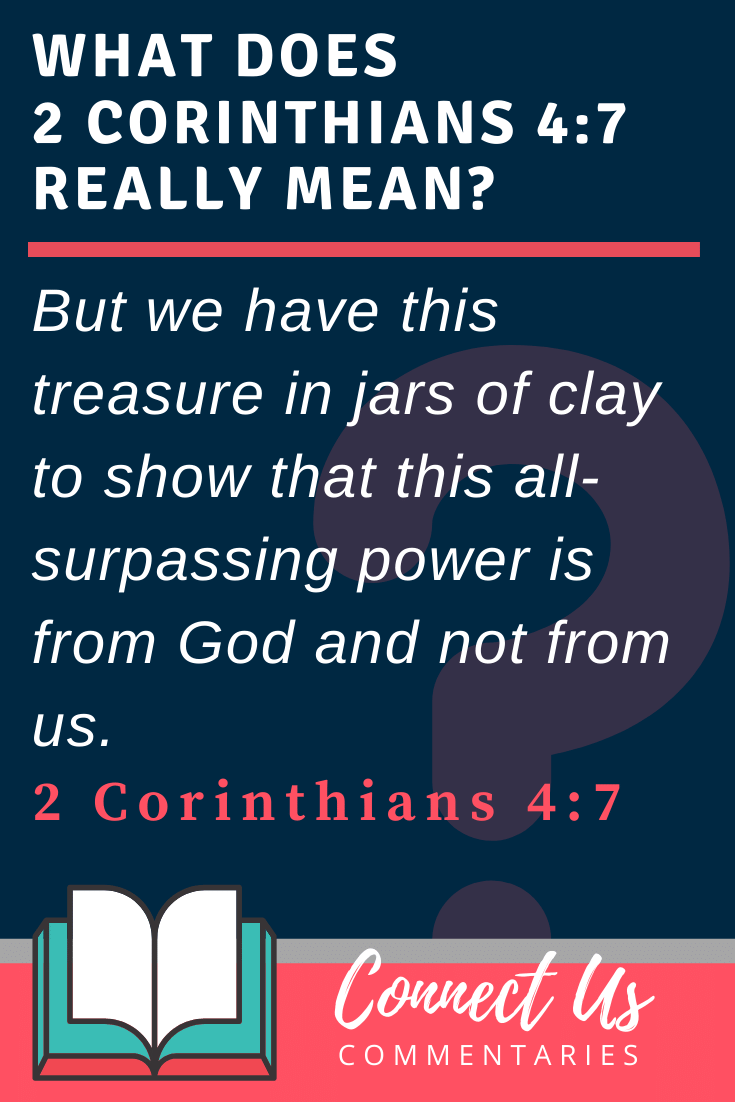