2 Corinthians 9:15
“Thanks be to God for his indescribable gift!”

Explanation and Commentary on 2 Corinthians 9:15

In 2 Corinthians 8-9, Paul discusses the Christian duty to provide financial support for Christians in Jerusalem who were facing economic hardship because of the famine in the 40s in the first century. At that time, it was a new concept to Christians to raise money for other people many miles away whom one had never met. The fundraiser was likely collected in the majority of the churches in Asia Minor and Greece. The Bible mentions contributions only from the churches in Macedonia, Achaia (Corinth was its capital city) and Galatia.

Commentators disagree about Paul’s motivation for his exclamation in this verse. Some think Paul was thanking God for making the fundraising effort successful so that something good was done. Others think Paul shouted this thanksgiving to motivate more giving, or in appreciation of the unity of ethnicities because Gentile Corinthians supported the Jewish in Jerusalem.

Historians believe Paul spent close to ten years raising money for these Christians. During the collection, a controversy arose that strained Paul’s relationship with the church in Jerusalem. The Apostle Peter refused to worship with the non-Jews in the Antioch church, and Paul accused Peter of hypocrisy over this (Galatians 2:11-14). The church in Jerusalem sided with Peter.

Though Paul continued his collection efforts after this dispute, commentators believe we do not have reliable historical information to know whether the collection was accepted in Jerusalem because of the controversy, rejected, or whether a compromise was worked out.

Breaking Down the Key Parts of 2 Corinthians 9:15

#1: “Thanks be to God…”
Paul burst out in an exclamation of thankfulness to God.

#2: “…for his indescribable…”
The Greek word for “indescribable” is used nowhere else in the New Testament and is translated as meaning “unutterable.” It means that words cannot describe and no human can fully appreciate the magnitude of the gift.

#3: “…gift!”
The prevalent belief seems to be that it means Jesus Christ, who is the gift of God. Some commentators think it means the Holy Spirit, the gospels, blessings from God, the forgiveness of the sins of Christians from the death of Jesus on the Cross, or the love of God. Yet others synthesize the analysis by arguing that the “gift” means Jesus Christ and all lesser gifts together. The one shared trait is that all are of a divine nature.

NIV
Thanks be to God for his indescribable gift!

NLT
Thank God for this gift too wonderful for words!

ESV
Thanks be to God for his inexpressible gift!

KJV
Thanks be unto God for his unspeakable gift.

NKJV
Thanks be to God for His indescribable gift! 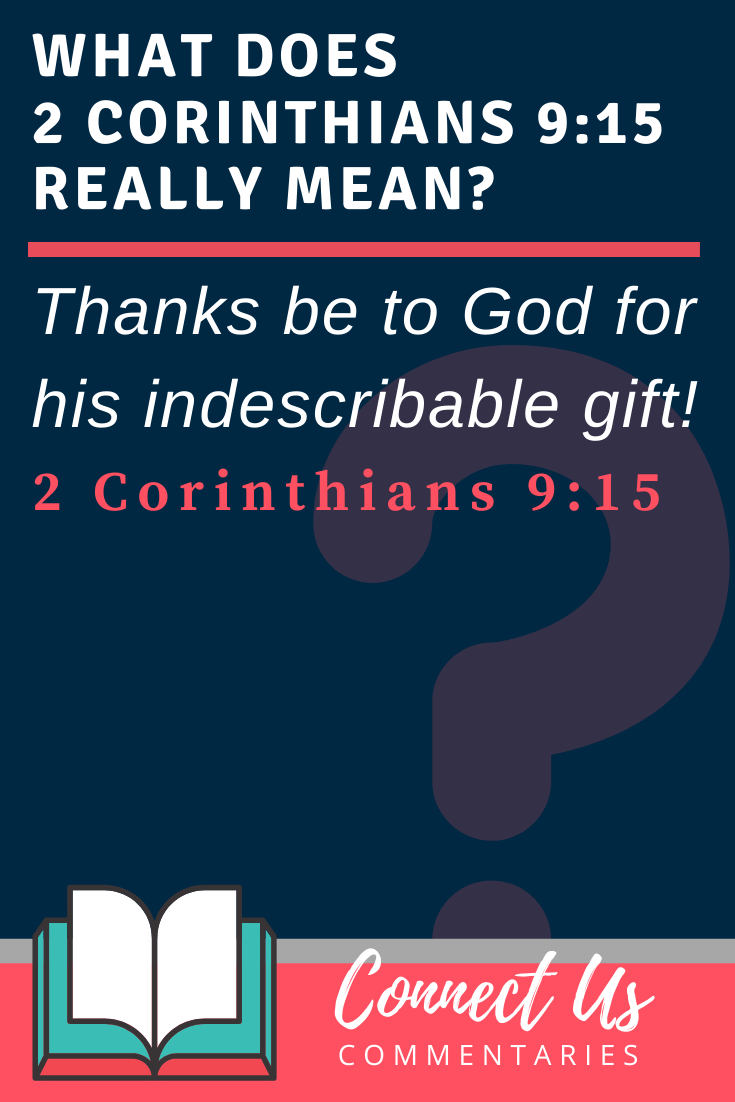