Acts 4:12
“Salvation is found in no one else, for there is no other name under heaven given to mankind by which we must be saved.”

Explanation and Commentary of Acts 4:12

After he healed the man lame from birth, the foolish religionists put Peter on trial. Under the influence of the Holy Spirit (Acts 4:8), he proclaimed that it was by the name of Jesus of Nazareth that the man was healed, by whose name only can mankind be saved. When Adam rebelled against God by rebelling against his righteous command, God put in motion a redemptive plan, the stages of which would span thousands of years.

First, through a vicarious man, Abraham, he called a people. From Abraham’s seed, he raised up a king after his own heart (1 Sam 13:14) from the tribe of Judah. From David’s line the Son of God, the Word, was incarnated in human flesh (Jn 1:14) and came to save us. Jesus Christ of Nazareth was his name. He lived a perfect life and is the way, the truth, and the life (Jn 14:6). If any will come to him, they can be saved, but as Peter says in this passage, there is no other way. The wrath of a holy and just Creator, our Father in heaven, is indeed coming (Col 3:6) to make all things right and judge sin, and the power of Christ and his finished work on the cross will be for believers, like Noah’s ark, when the world was destroyed by a great flood because “The Lord saw how great the wickedness of the human race had become on the earth, and that every inclination of the thoughts of the human heart was only evil all the time” (Gen 6:5).

But God, rich in mercy (Eph 2:4), would not send another world-destroying disaster, not without a plan to save many more people. “For God so loved the world that he gave his one and only Son, that whoever believes in him shall not perish but have eternal life. For God did not send his Son into the world to condemn the world, but to save the world through him” (Jn 3:16-17).

Breaking Down the Key Parts of Acts 4:12

#1 “Salvation…”
Since God has wrath for sin, no one can be saved apart from God’s help. Sending his one and only Son to die for us, God made a way for us to impute our sin onto Christ, who paid the penalty and imputed to us his righteousness by faith. If we do not repent and put our faith in Christ for our sins, we will pay our own punishment in hell.

#2 “…is found in no one else, for there is no other name under heaven…”
There is truly no other way to be saved, since we are born in Adam, in sin, and all die. Our sinful nature is inherited since the fall, and we sin because of our sinfulness. Our salvation cleanses us from our sin by only one name, Jesus Christ. Since we must have an ultimate sacrifice, only the Son of God, who is the only one born sinless, can save us.

#3 “…given to mankind by which we must be saved…”
It is right to remember that our salvation is a total gift from our Father in heaven. Undeserved, it is a complete work of grace and mercy. We must be saved by this name alone, and the free gift of life that is promised to those who believe in this name.

NIV
Salvation is found in no one else, for there is no other name under heaven given to mankind by which we must be saved.

NLT
There is salvation in no one else! God has given no other name under heaven by which we must be saved.

ESV
And there is salvation in no one else, for there is no other name under heaven given among men by which we must be saved.

KJV
Neither is there salvation in any other: for there is none other name under heaven given among men, whereby we must be saved.

NKJV
Nor is there salvation in any other, for there is no other name under heaven given among men by which we must be saved. 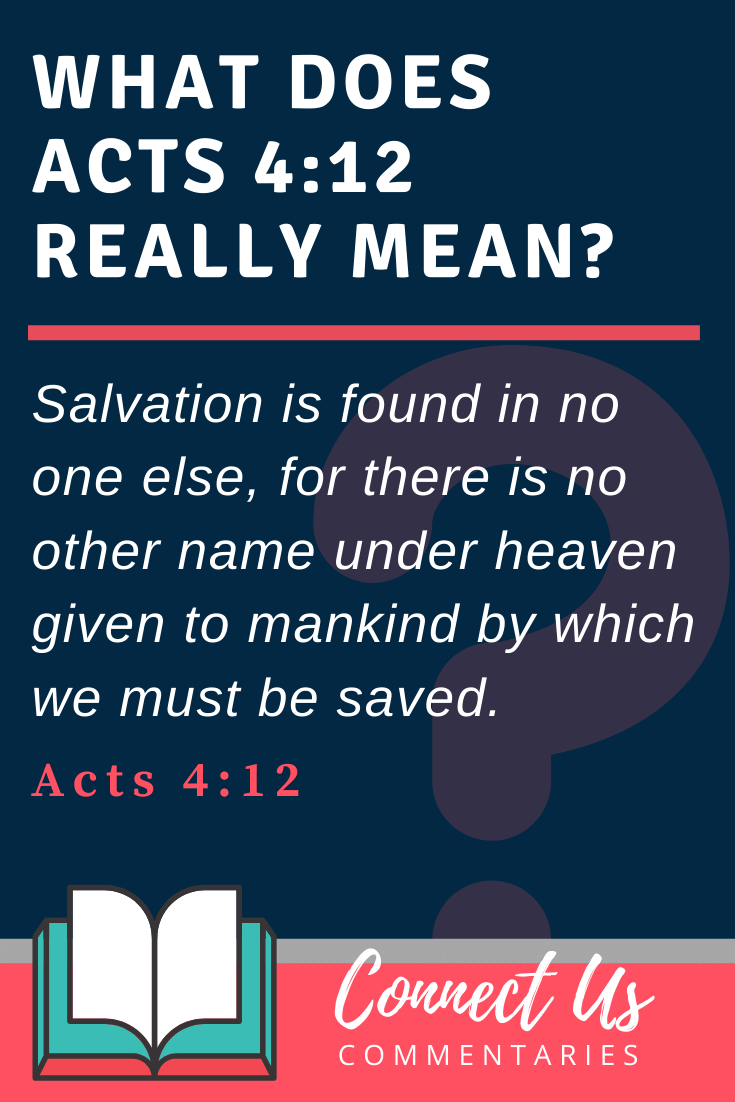