Explanation and Commentary of Amos 5:24

The prophet Amos prophesied in the northern kingdom although he was from Jerusalem. Israel was enjoying prosperity and loved to practice their religion of God with festivals, sacrifices, and rituals. That this religious practice was mixed in with idol worship would explain the wayward morals of the nation, causing them to oppress the poor. Economic injustice and inequality were at its height.

We should not think that there is any religious practice that would appease the heart of God if our lives don’t align with his moral character. Today, it would be like going to work all week and living dishonestly, oppressing workers, robbing the poor, taking advantage of people, and then going to church on Sunday, raising hands, singing songs, and praying loud prayers to God for all to see and hear. God claims to “hate” such religion (Amos 5:21).

A society that loves church participation, but without a heart for God, will fall into moral decay, and a sign of that will be injustice toward the marginalized. Jesus said there would always be poor among us (Mt 26:11). But how we care for our poor and voiceless as a society says a great deal about the collective faith of the nation.

Breaking Down the Key Parts of Amos 5:24

#1 “But…”
This conjunction is in reference to the condemnation of God for the injustice and oppression practiced by the Israelites. Amos’s message was that God hated the injustice and the show of religion that they were making with their festivals, feasts, and sacrifices. He did not want to hear their songs and harps anymore.

#2 “…let justice roll on like a river,”
God considers it an act of worship to live justly. Jesus told the woman at the well that his Father was seeking “true worshipers.” True worship is done in “spirit and in truth” (Jn 4:24). True worship is showing mercy to those who need it. A heart that truly worships God will love God’s justice. They will hate a bribe and a false scale (Ex 8:21). They will trust God for all things.

#3 “…righteousness like a never-failing stream.”
“Seek first the Kingdom of God and his righteousness” (Mt 6:33). To be righteous is to be like the Father in all his ways. Justice and righteousness lived out will “roll on” and never fail. When a whole society lives justly and seeks righteousness, the effect will be a compounding, perpetuating river of blessing from God. It may not be until Jesus returns that we see a society experience the fullness of this. But there will be a “never-failing stream” in the City of God (Rev 22:1-3). This starts at the level of the individual and works outwardly to the family, and then to society. A nation will be as righteous as its citizens.

NLT
Instead, I want to see a mighty flood of justice, an endless river of righteous living.

KJV
But let judgment run down as waters, and righteousness as a mighty stream. 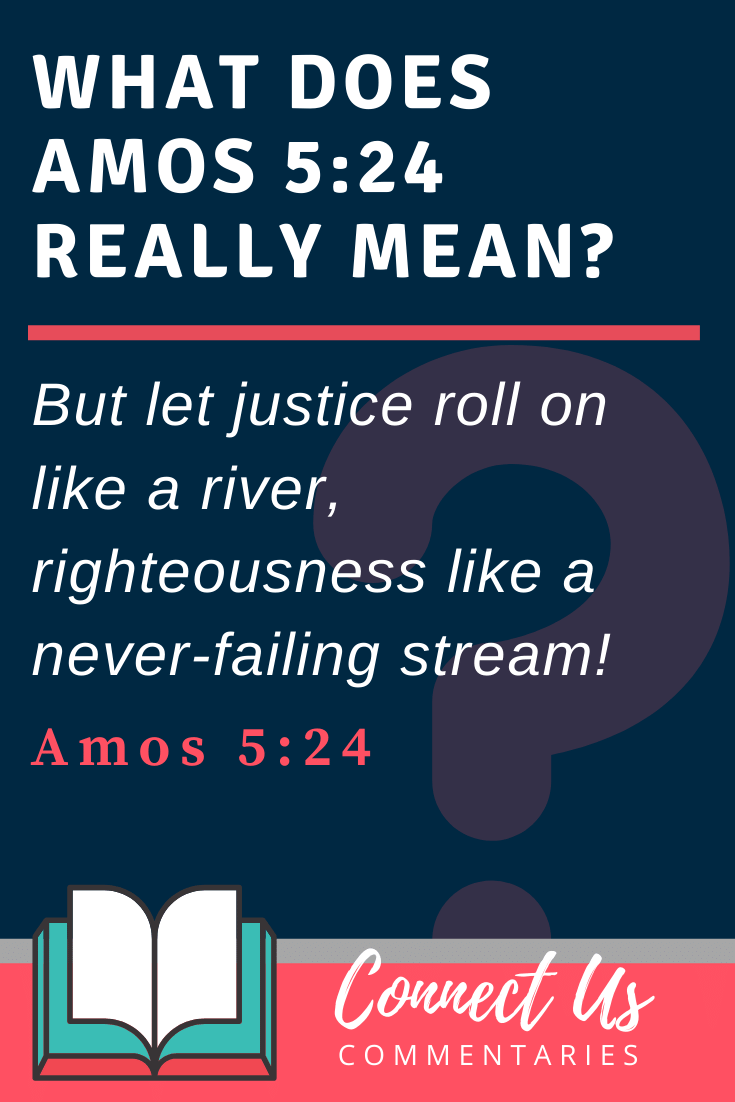