Deuteronomy 31:6
“Be strong and courageous. Do not be afraid or terrified because of them, for the Lord your God goes with you; he will never leave you nor forsake you.”

Explanation and Commentary of Deuteronomy 31:6

The world makes two errors. The first is that it tells people to be weak and afraid. It’s ok to act out of emotionalism. It’s ok to run away from your problems. It’s ok not to stand up for what is right. The second error is that you should be strong and courageous, but in your own strength, or because of something in yourself.

For the believer, it is quite different. The truth is that there is no one to fear because we fear God. Jesus told his followers: “I tell you, my friends, do not be afraid of those who kill the body and after that can do no more. But I will show you whom you should fear: Fear him who, after your body has been killed, has authority to throw you into hell. Yes, I tell you, fear him.”

Fearing God is trusting him. What can man do to you? The Lord is your protector and your strength. Today Christians in the world are being persecuted. In the West, persecution will likely rise if Christians actually stand up and act like Christians. But even if persecution comes, there is simply nothing to fear. The sovereign God of the universe says so.

Breaking Down the Key Parts of Deuteronomy 31:6

#1 “Be strong…”
Much emphasis has been placed in the Church on being weak. But when we are called weak by God it is not a compliment. Jesus called us to be meek (Mt 5:5), but not weak. Meekness is to be strong and able to do harm, but restrained and gentle. God would have his children capable. There will be times when physical strength fails, but moral strength and courage should accompany the born again even on our deathbeds.

#2 “…and courageous. Do not be afraid or terrified because of them,”
Much of the time strength is manifested in courage. God particularly was concerned that his people would not be afraid because of the enemies they would have to face in the Promised Land. Hadn’t God promised it to them? Hadn’t they had to wander in the wilderness forty years because of their prior disobedience caused by their fear of the people?

#3 “for the Lord your God goes with you;”
It is true that God’s power is made perfect in weakness (2 Cor 12:9), but Christians use this as an excuse to simply remain weak and ineffective. What it means is that where our strength ends, which should be immediate, His can begin and is infinite. The Israelites had God’s promise to go before them in all their battles

#4 “he will never leave you nor forsake you.”
God is faithful. If you are seeking him and his righteousness, abiding in him, doing his will, then no matter what, he will never forsake you. He forsook Jesus on the cross for a moment (Mt 27:46) so that he could save us and never leave us. “Remain in me, as I also remain in you” (Jn 15:4).

NIV
Be strong and courageous. Do not be afraid or terrified because of them, for the Lord your God goes with you; he will never leave you nor forsake you.

NLT
So be strong and courageous! Do not be afraid and do not panic before them. For the Lord your God will personally go ahead of you. He will neither fail you nor abandon you.

ESV
Be strong and courageous. Do not fear or be in dread of them, for it is the Lord your God who goes with you. He will not leave you or forsake you.

KJV
Be strong and of a good courage, fear not, nor be afraid of them: for the Lord thy God, he it is that doth go with thee; he will not fail thee, nor forsake thee.

NKJV
Be strong and of good courage, do not fear nor be afraid of them; for the Lord your God, He is the One who goes with you. He will not leave you nor forsake you. 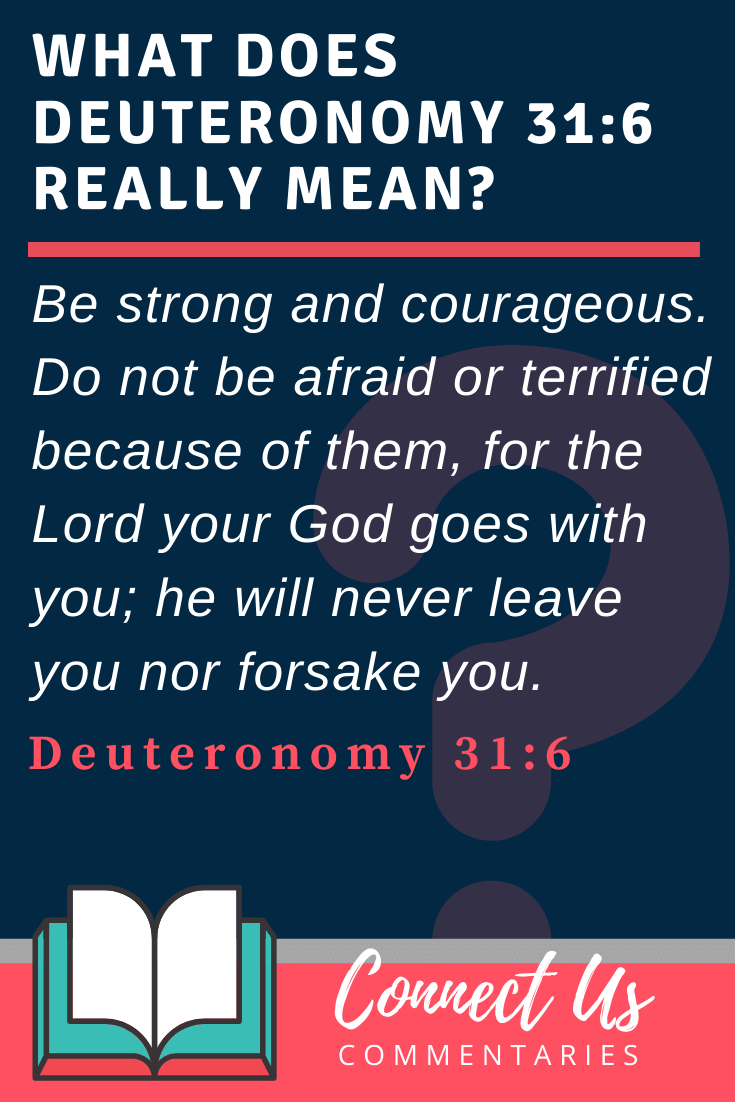