Galatians 3:28
“There is neither Jew nor Gentile, neither slave nor free, nor is there male and female, for you are all one in Christ Jesus.”

Explanation and Commentary of Galatians 3:28

God created all men and women equal, regardless of race or gender. He has set apart certain people for certain roles, but all earthly relationships are meant to be horizontal, and not vertical. Jesus made this crystal clear when he explained to his disciples that while the Gentiles Lord it over and dominate those they lead, Jesus himself came among them as a servant in his Lordship (Lk 22:27).

Not only that, but God in Christ has revealed that his plan, even in setting apart Abraham, was to save the whole world and reconcile all men to himself and one another. This is a true heavenly kingdom of priests and equals (1 Pt 2:9).

Breaking Down the Key Parts of Galatians 3:28

#1 “There is neither Jew nor Gentile,”
This would have seemed a radical statement at the time, particularly for those who were Jewish. Even the Jews who had recognized Jesus as their Messiah were more than reluctant to give up their special status as the chosen of God. In a certain sense, the Church should recognize the Jews as the chosen people. Paul said that even those who have been blinded to the truth of Christ, have been blinded in order to open the faith up to the nations as part of God’s plan. He also indicated that before the return of Christ the will be grafted back in (Ro 11:11-31).

#2 “neither slave nor free,”
A point of contention among the opponents of Christianity is that the New Testament authors said little to denounce slavery in their writings. But this statement by Paul provides the underpinning for ultimate emancipation. Bond servanthood, not quite the same as the race-based chattel slavery of American history, was a way of life in the contemporary class system of the ancient world, a system that would be replaced along with feudalism and other forms of birth classism. It was Christ and his teaching that would undermine all systems of intrinsic inequality. Even then, the master was to realize that his servant was his equal in the eyes of God, a radical idea for the world at that time.

#3 “nor is there male and female,”
Christ’s work is a work of restoration. What were males and females before the fall of man into sin and before the battle of the sexes waged by sin (Gen 3:16)? They were different by anatomy, nature, and role, but never by intrinsic value. The husband in the Kingdom of God is the head of his wife, just as in the fallen world (even more so in this feminist age), and just as in the Garden of Eden. Men are still men, and women are still women. Neither is better than the other. Depending on the spirit of the age, one usually dominates, but in God’s kingdom, it should not be so.

#4 “for you are all one in Christ Jesus.”
Just as Christ and the Father are one (Jn 10:30), Christ calls his followers to be one in him, and with the Father. This means that all human relationships, particularly within the Church, are bound by the blood of Christ, with Christ between us. This also erases class distinctions. Those who were are one with, we must also be equal to.

NIV
There is neither Jew nor Gentile, neither slave nor free, nor is there male and female, for you are all one in Christ Jesus.

NLT
There is no longer Jew or Gentile, slave or free, male and female. For you are all one in Christ Jesus. 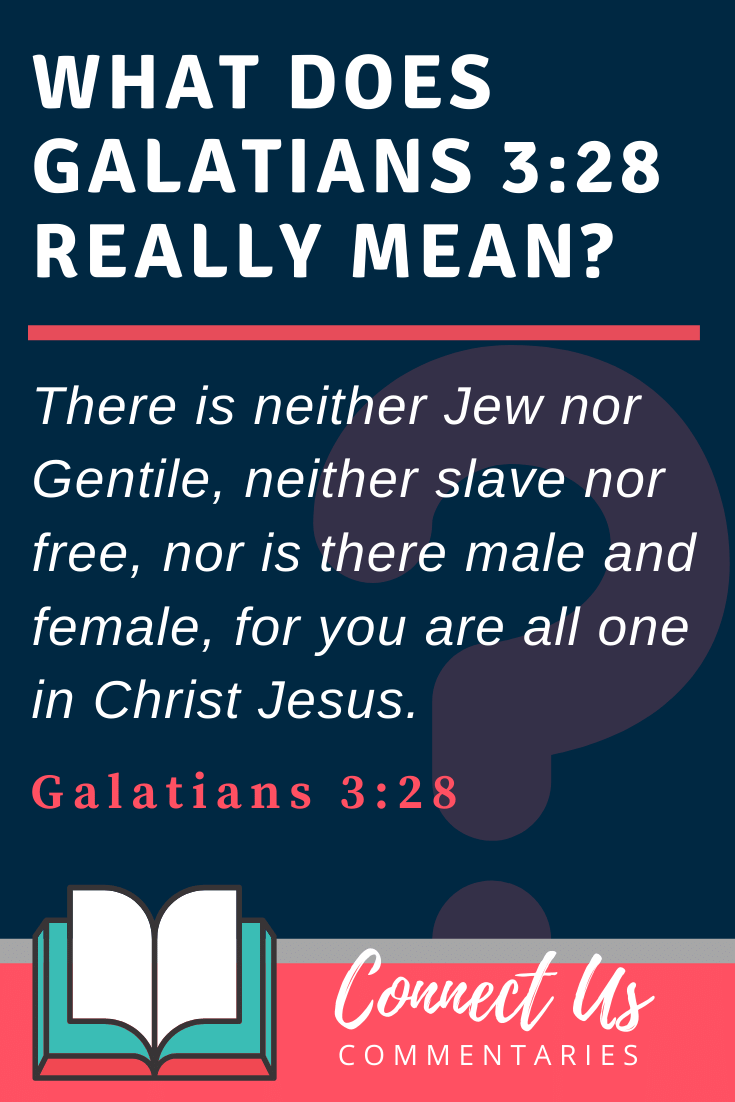