Galatians 6:14
“May I never boast except in the cross of our Lord Jesus Christ, through which the world has been crucified to me, and I to the world.”

Explanation and Commentary of Galatians 6:14

One of Paul’s criticisms of the Judaizers who are attempting to compel the Galatians and others to be circumcised is that they are trying to avoid persecution, and that they are trying to boast in the number of circumcisions. This might be like a driven church ministry today who glad-hands or scares people into “accepting Christ” so that they can boast of the number of “decisions for Christ” for which their ministry is responsible. This is done both for the sake of pride and often financial gain.

Paul then goes on to say the words in 6:14. It is tempting for Christians to find their worth in what they accomplish, especially for God, but Paul, though he was one of, if not the most productive missionary in Christian history, refuses to do so. When he has poured himself out and given every last drop of blood and ounce of energy to the mission of preaching the Gospel and planting churches all over the ancient world, he will still boast only the cross of Christ. When he has born as much spiritual fruit as can be born by any human, he will rather go the judgment day on Christ’s record than his own, rejoicing that his name is written in the Lamb’s book of life.

Boasting is always a way of relating to other people. We cannot boast before God, by whom, through whom, and for whom we accomplish anything we can accomplish. Jesus would have us lay down boasting before men, as any praise we could garner from such a foolish endeavor would be our cheap earthly substitute for true reward. Let us pour ourselves out in serving God and living the life he’s given us, for his glory and with all our might, and at the end of it all, stand squarely on the life of Christ for our admittance into his glory.

Breaking Down the Key Parts of Galatians 6:14

#1 “May I never boast…”
Typical boasting is antithetical to the Christian life in every way imaginable. It is the insecure man or woman who doubts his or her identity in God who has the arrogance to boast of works or achievements.

#2 “…except in the cross of our Lord Jesus Christ,”
By boasting in the cross, Paul is saying that anything good in him is because of, and by way of Jesus’ finished work and imputed righteousness. If boasting is done to convince others, and even ourselves, of our importance and identity, then boasting in the cross alone is the most honest way for the Christian to profess his or her worth.

#3 “through which the world has been crucified to me, and I to the world.”
If Paul has died with Christ, then he has died to the non-Christian world, meaning the elements of the world that are broken, sinful, and ruled over by Satan. If Paul has died to the world, then the world has died to him, meaning, it has no hold on his life anymore. The world itself, that is, planet earth, is not to be abandoned by Christians who, while not of it, are assigned to be in it as representatives of Jesus who came, lived, and died to restore the world, which will be renewed along with all Christians at the end of the current age.

NIV
May I never boast except in the cross of our Lord Jesus Christ, through which the world has been crucified to me, and I to the world.

NLT
As for me, may I never boast about anything except the cross of our Lord Jesus Christ. Because of that cross, my interest in this world has been crucified, and the world’s interest in me has also died.

ESV
But far be it from me to boast except in the cross of our Lord Jesus Christ, by which the world has been crucified to me, and I to the world.

KJV
But God forbid that I should glory, save in the cross of our Lord Jesus Christ, by whom the world is crucified unto me, and I unto the world.

NKJV
But God forbid that I should boast except in the cross of our Lord Jesus Christ, by whom the world has been crucified to me, and I to the world. 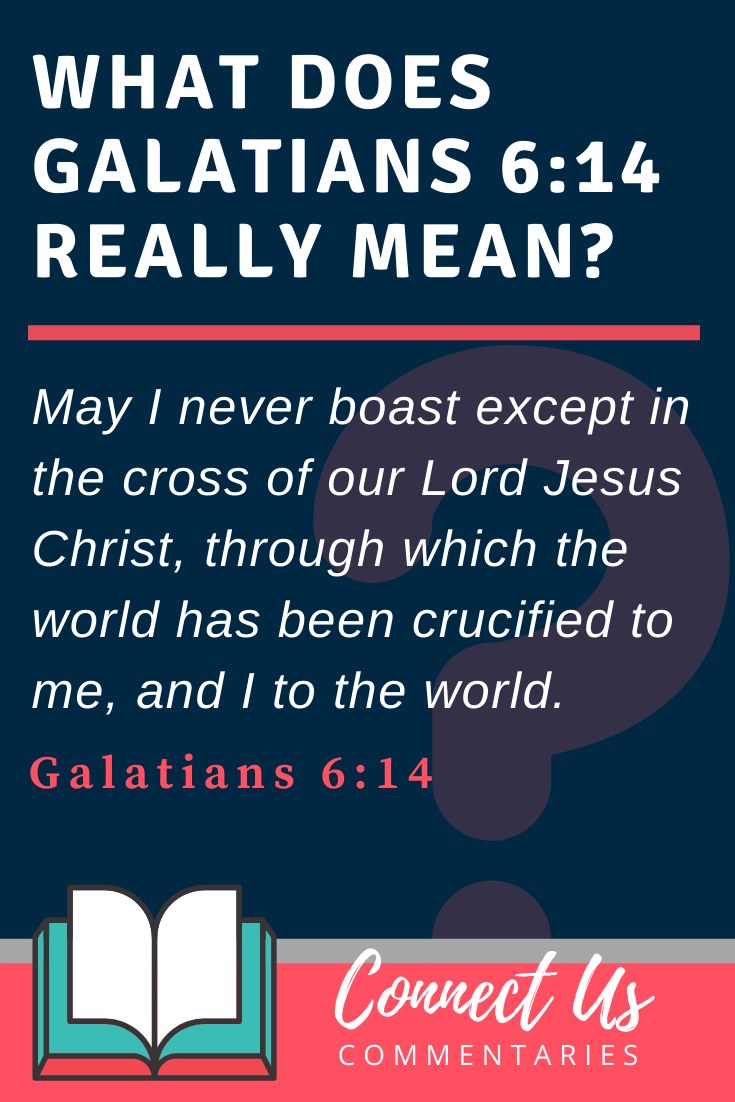