Genesis 2:24
“That is why a man leaves his father and mother and is united to his wife, and they become one flesh.”

Explanation and Commentary of Genesis 2:24

The Triune God existed perfectly in himself before he created the world. On the sixth day, he brought forth the crown jewel of his creation. Adam was the crown jewel because he was the image of God the creator. God made Adam totally complete in himself, and yet also to be further completed by his union with his wife, Eve, who God made from the rib bone of Adam, so that he said, “This is now bone of my bones and flesh of my flesh” (Gen 2:23).

As one flesh, a man and his wife are an image together of God the Father, God the Son, and God the Holy Spirit, who is one God, in three persons. This is a great mystery because the Trinity is a mystery. Part of this union is a severing of a previous union between a child and his parents. When a man or woman joins another in matrimony, they leave the household of their youth. A godly father gives his daughter away to a groom in a similar way as Adam’s Heavenly Father gave to him his wife. This is a ritual symbol of the conjugal relationship that is forming, the sacred and unbreakable bond of what “God has joined together (Mk 10:9).

This has more than symbolic implications. It is also practical. A husband and wife would do well to prefer their spouse over their parents. A husband’s loyalty is to his wife, not his mother. A wife should not run home to mom and dad whenever there is a conflict with her husband. This is difficult to learn, but crucial for a healthy marriage relationship.

Breaking Down the Key Parts of Genesis 2:24

#1 “That is why a man leaves his father and mother…”
It is right for a young man to leave the household of his parents when he is able so that he can begin to build a life of his own, cultivating his relationship with God and learning to begin to fulfill his God-given purposes in life. He should learn to become independent of his parents so that he can someday be the head of a wife, and even become useful to his parents in some way.

#2 “…and is united to his wife, and they become one flesh.”
As the young man is going along, living the life entrusted to him as an image-bearer, God will likely look at him, unless he is called to live as a celibate, and say, “It is not good for the man to be alone” (Gen 2:18). At which point he will bring to his attention a young woman who he has called to be his helper in life. He will notice her, court her, marry her, and they will become one flesh. Their independence from their fathers’ houses will be an extension of the young man’s independence recently gained. They will reflect the image of God both as complete individuals, and as a conjugal relationship, likely including children of their own who will one day go forth like arrows (Ps 127:4) and do the same.

NIV
That is why a man leaves his father and mother and is united to his wife, and they become one flesh.

NLT
This explains why a man leaves his father and mother and is joined to his wife, and the two are united into one.

ESV
Therefore a man shall leave his father and his mother and hold fast to his wife, and they shall become one flesh.

KJV
Therefore shall a man leave his father and his mother, and shall cleave unto his wife: and they shall be one flesh.

NKJV
Therefore a man shall leave his father and mother and be joined to his wife, and they shall become one flesh. 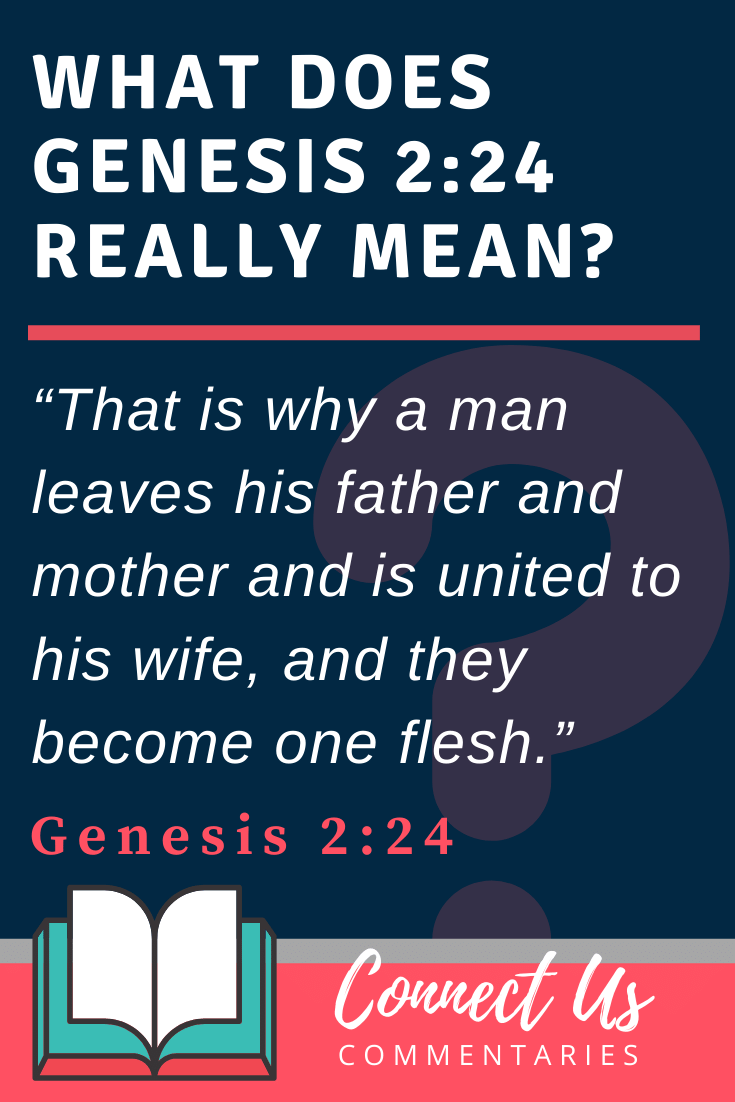