Jeremiah 29:11
“‘For I know the plans I have for you,’ declares the Lord, ‘plans to prosper you and not to harm you, plans to give you hope and a future.’”

Explanation and Commentary of Jeremiah 29:11

The prophets often pronounce unending wrath and punishment from a God who cannot be abated, and in the very next breath, the everlasting forgiveness and patience of the same God. This is no accident. God’s attitude toward us is simultaneous hatred for sin, with the necessity of punishing it, and love and forgiveness for the sinner.

Many a living room wall displays this verse as a kind of promise of prosperity doctrine for Christians, but calling it that would be not quite accurate. However, it can be applied to us as Christians who are part of the fulfillment of this promise to the Jews, who were the beginning of the Church. We should take solace in this promise, and be grateful and encouraged that not only did God keep this promise in a small way after the seventy years of exile, but he also keeps it in greater fulfillment in the work of his Son Jesus, who has brought us peace with God through his shed blood.

Breaking Down the Key Parts of Jeremiah 29:11

#1 “For I know the plans I have for you, declares the Lord,”
God is not learning as he goes. There are false doctrines of open theism that teach that though God knows all the possibilities and odds of what we will do, he waits to see what will happen and doesn’t know the future. This is a heresy. For, he knows his plans. He knew since before he created anything that Jesus would be the Lamb slain since the foundation of the world.

#2 “plans to prosper you and not to harm you,”
The Jews had good cause to worry that God was planning to harm them. They were in dire straights, and the devout understood that they had gotten what they deserved, though they. had been clearly and patiently warned about. It would be water to a man dying of thirst to hear God declare that he had plans still to prosper them in spite of their disobedience. The only thing they might have wondered is “why?” The answer is in his glory and the glory of his Son (Ez 20:9).

#3 “plans to give you hope and a future.”
They had squandered and lost their inheritance. They had fallen from a great height and must have felt great despair. They must have been settling in for an existence of regret and heartache. But God had plans for them still. They would still have hope, and they could look to the future for restoration, not only in this life but in the one to come.

NIV
“For I know the plans I have for you,” declares the Lord, “plans to prosper you and not to harm you, plans to give you hope and a future.”

NLT
“For I know the plans I have for you,” says the Lord. “They are plans for good and not for disaster, to give you a future and a hope.”

ESV
“For I know the plans I have for you,” declares the Lord, “plans for welfare and not for evil, to give you a future and a hope.”

KJV
“For I know the thoughts that I think toward you,” saith the Lord, “thoughts of peace, and not of evil, to give you an expected end.”

NKJV
“For I know the thoughts that I think toward you,” says the Lord, “thoughts of peace and not of evil, to give you a future and a hope.” 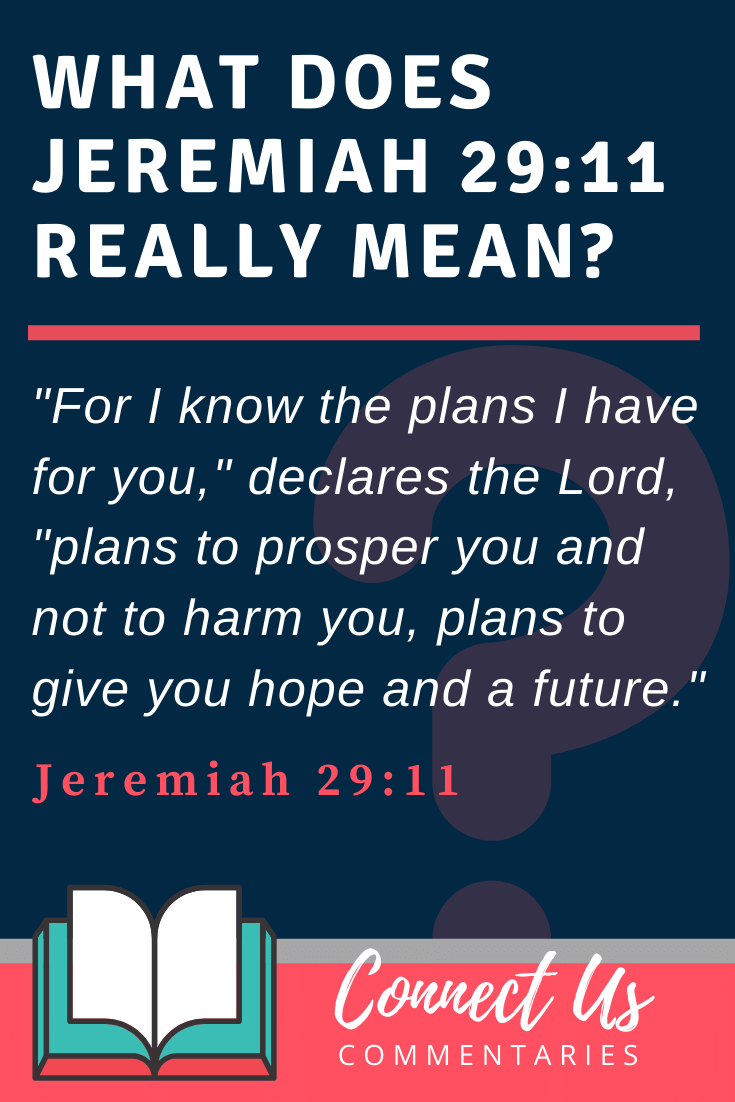